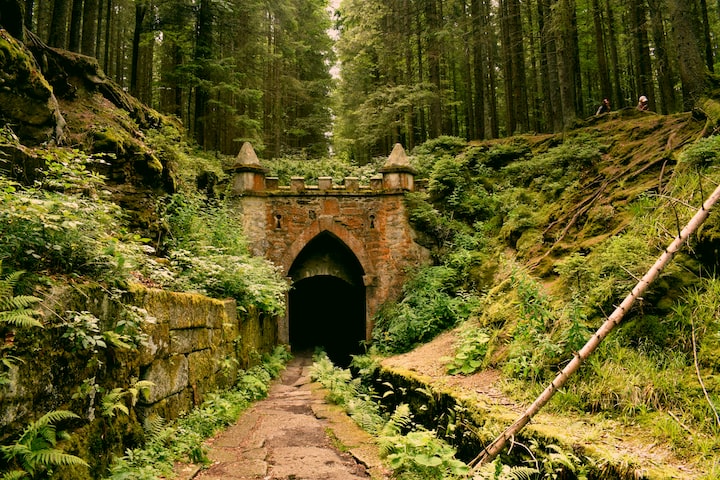 Photo by Anna Gru on Unsplash

A gentle, chilly breeze drifted between the green leaves of the trees. A shrill wail echoed throughout the woods. Lost and alone, a toddler stumbled through thick undergrowth. Tears streamed down the small girl's pale face as her short white hair and long white dress danced in the wind. Her bright green eyes darted out of sheer terror as she walked and crawled through the forest.

"Mama!" The young girl screamed as she whipped around at every sound. A foul stench drifted through her nose, and she twisted her face in disgust. She tumbled closer to a massive tree centered in the woodland, its highest roots covered in moss above the ground, their ancient reach weaving up and down the forest floor. The various noises unleashed from nearby wildlife abruptly cut short as the ground commenced to shake.

Within moments, the hot breath of a beast burned against her back. The petite girl gradually turned to stare directly into a forest dragon's scarlet glare. Promptly another large silva drac similar in appearance peeled its scaly, green figure off of the moss growing along the huge tree trunk. Its broad wings stretched out as it shook itself awake. Instead of horns along their head and back like most dragons, these forest dragons had leaflike appendages jutting out from their figure.

The young girl locked her fearful emerald gaze with the creature's mysterious crimson glowing irises. Chills rushed down her spine as her heart pounded.

"Who art thee?" The deep, powerful voice echoed throughout her mind as she crashed to her butt.

A low gasp escaped her lips as she witnessed a young woman approaching from the corner of her eye. The young girl's eyes widened in awe as she noticed the woman's gaze; her left iris a brilliant blue, and her right one shimmered like a vibrant emerald. A smile stretched across the woman's red lips and pale face as she brushed the girl's hair back out of her face.

"Thou a fool for coming here, Cassandrithia."

The woman smirked as she raised an eyebrow. "I'm not here to fight. I'm here to compromise," she declared as she stood tall. "You can't convince me that this isn't a sign. A child with a similar appearance to that mutated divine bloodline shows up here and now, just when I'm on my way to share sights and thoughts." Cassandrithia's hood of her dark green cape came off, and her long, pointy ears peeked out from behind her thick, strawberry-blonde locks.

"The young goddess still hasn't arrived like thee claimed she would. What could thou possibly offer me? Thy sight isn't as clear as it used to be, huh?" The dragon chuckled mockingly.

"My sight is being played with. There is a deity somewhere who doesn't want her to get here. Possibly the same that banished this child here away from its home. I've been trying to reach her for months, but something isn't right. We've known each other for hundreds of years… I remember you knew ways to break mental barriers. Could you reach her?"

"Thee claimed to come to a compromise, so what's the deal? What do I get out of this?" The dragon interrogated.

Cassandrithia tilted her head as she snapped her fingers. A vast mist spread between them within a heartbeat and displayed an image for the dragon to see. The sight was full of hope, a buzzing forest with creatures thriving among the plants. A tranquil place, not tarnished by humans but rather cherished.

"Her name is Florafilia Alyssia Fulguris. She's a well-rounded goddess with extensive knowledge and abilities. She could save your forest. I've heard she's been busy cleaning up the galaxy after some power-crazy fools left mayhem in their path. I fear she might require help… whoever doesn't want her helping could be behind it all. We both know they must have dangerous capabilities to unleash what they have… so the compromise is simple. If you help me help her, she'll help you save your home."

"Why doth thou believe we need any help protecting our home?"

"I've seen what's been done in the northern lands… the men will soon begin heading south, directly towards you." Cassandrithia paused. "They have shown no mercy and have proven difficult to kill for the dragons who once lived up in the north… why turn away any help? In the end, any little difference could determine the outcome."

The dragon snorted as he shook his head. "Fine, I'll reach out to this Florafilia, but don't expect me-"

"I was born and raised here in the south; it's in my best interest that she comes. If you could tap into her mind, allow me to deliver the call for aid."

The dragon rolled his mystic red eyes as he soon sealed them shut. "If I end up possessed or some shite, it's thine fault for dragging me into this divine drama."

"It's a universal war, not mere drama." Cassandrithia corrected with a frown.

"There are a lot of obstacles in the way, no wonder thee struggled," the dragon chuckled. Cassandrithia rolled her eyes with a smirk.

"Lythicazith, you have been sleeping on your beautiful trees for too long. The world out there is changing, and soon everything will shift here as well… how will you handle that? You mock my concern, but you and your kin will end up like the once great dracs of the north, hunted and dying out if you don't get ahead of this threat." Cassandrithia sighed.

"You've been my neighbor, dare I say friend, for many long centuries… I don't want to see this land destroyed and your kin chased out. The more of us that stand together now better the chances to make a difference when the time comes."

Seconds later, Lythicazith's shimmering red glare burst open with a thick glow. Silence surrounded the pair as he penetrated her mind. Everything slipped into darkness except their figures and the massive tree behind them. Curtly a red line began to form all along the various tree roots.

Lythicazith towered over Cassandrithia. "I've shared this vision with thine friend, Florafilia. Unfortunately, the response I received was not what we hoped for, but rather a hint of trouble, just like thee worried."

"What was the response?"

"Florafilia can't help. She's not powerful enough to stop all my followers… they will continue to spread. I suggest you brace yourself as best as you can for your enslavement or death - either way, your souls are now mine."

Cassandrithia’s eyes widened as fear flooded through her system. "We need to help her; she must be vulnerable right now or held captive by this enemy."

Lythicazith dipped his head to Cassandrithia as he shook his body. "Time to revisit Trindavin," he paused as he leaned low in front of the she-elf. "I hope thou art ready to confront thine past. Thine elven friends weren't too happy with thee last time."

Cassandrithia sighed as she shrugged. The she-elf picked up the young toddler before climbing onto Lythicazith's back. "We'll see what happens. Florafilia could be anywhere. Our best chance of finding her is to start by visiting with her family. Her grandmother, Wistria, has always had a talent for hunting down whatever she wanted. I believe she's the high queen, no longer that, ekesa, Amala. I appreciate your help; I'm sure Wistria will too when she sees her relative returned home safely."

The dragon's figure shifted with amusement as he chuckled. "My, my, Cass. I haven't heard thou use that term in a long time." Cassandrithia grinned. "Also, thee means if this child is related to Wistria," he corrected with snark.

"Well, if you ever encounter her soul, you'll understand why. She hates males; she's controlling, belittles other females, and believes they all shouldn't rule, hunt, or fight, herself excluded. I could go on and on. Either way, this child doesn't come from here and needs to find a safe place with a good family."

"Oof," Lythicazith raised his head as his leafy appendages danced in the light breeze. "Well, no wonder she is no longer a high queen of elves. My children deserve a life free of constant fear, so I'll do what I can to help. This child could also be an enemy, but it deserves a good home in the meantime. Despite our differences, thou has been a good friend, so I shalt follow thee to whatever end."

Please consider liking, sharing, subscribing, pledging, and tipping if you liked what you read! Thank you for reading! :D