The Summer of Mango

by D-Donohoe 4 months ago in satire
Report Story 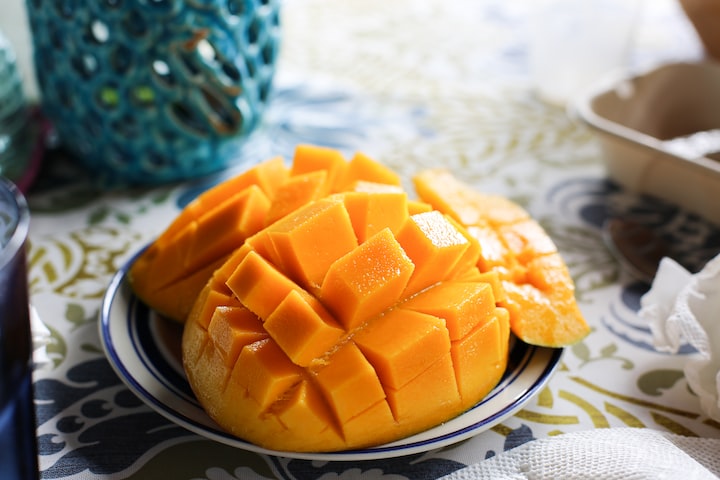 Photo by Desirae Hayes-Vitor on Unsplash

I grew up in Northern Australia. There are so many different things that remind me of Summer: water skiing, beaches, holidays. But if you ask for one food that reminds me of Summer, it’s the mango all day, every day. The climate there was perfect for growing mangoes, and so much of Northern Australian culture surrounds the mango, there is the Big Mango, songs like ‘Mango Shade’ by Graeme Connors, and culinary delicacies aplenty.

Here are a few memories that mangoes evoke for me

Sharing mangoes with the family

We had a massive mango tree at home. Nearly fifty years on, it still bears fruit, it towers over the backyard and often my Mum still has people jumping the fence to steal a mango or two.

Because we often grew way too many for us to eat, we would send boxes of them to relatives in places that didn’t have a readily accessible supply of mangoes. Regularly we would send them by rail because it was cheaper. Often, I’d get asked to drop them to the train station.

One year stands out to this day, I took three boxes of mangoes to the freight depot to have them sent on to family. The man behind the counter greeted me in a unique fashion. “Let me guess, those are boxes of mangoes?” he said as I approached carrying my boxes. I gleefully replied, “Yep!” But it seemed he was in no mood for mango conversation today, and instead, he launched into a tirade.

“This time of year, that’s all anyone sends. Mangoes, mangoes, mangoes. I’m sick of mangoes. You see those boxes over there?” he asked, pointing to some more boxes on the floor, then he continued “Guess what’s in them?”

Feeling quite intelligent at that point I replied “Mangoes?”

“Yeah, Mangoes. You know where they’re going?” but this time he didn’t wait for my response, “Bowen! Some bright spark is sending bloody mangoes to Bowen”.

Now for those unfamiliar with the agricultural regions of Northern Australia. Bowen is one of the major producers of mangoes in Australia. In fact, there is a variety of mangoes called the Bowen Mango. In fact, the previously mentioned Big Mango is in Bowen.

I hurriedly paid for the freight costs and got out of there fearful that mango madness was about to take over this poor soul.

Ripe mangoes are great, but when they are all ripe at the one time and you can not bring yourself to throw out that delicious fruit, what do you do? Well in our house you would take them, peel them and slice them up. Then you’d place them in the freezer. If you needed some for cooking, they were there, but even better you’d just break off a chunk of mango and eat it straight from the freezer.

I remember vividly sitting on the back steps at home eating frozen mango to cool down. As a bonus, because it was frozen you wouldn’t get as much mango juice everywhere, so you missed out on getting in trouble with Mum.

I finished school and unlike a lot of my friends who were going to bum around until university started, I was told in no uncertain terms that I’d be getting a job. Not too many people were keen to employ someone for the holidays only, that is until you discovered the itinerant work market. I saw an advertisement looking for mango pickers. I applied, and through a very non-rigorous selection process (basically if you had arms and legs that worked you were in), I started my first ever proper paying job.

They were long, hard days in the Australian summer. You earned your money, that’s for sure. But also, to a seventeen-year-old, it was good money. My bank account was going to be quite healthy before I got to university. I also learned that mango sap will eventually eat your skin and leave you with some nasty sap burns.

I learned the value of hard work; I think this also prompted me to seek out a career that wouldn’t have me sweating and swearing through a Northern Australian summer. It is a testament to this fruit that even after all that pain it remains my favorite.

I worked in a regional police station for a while. The courthouse was next door and in between the two buildings was an amazing mango tree. We would often get mangoes for ourselves or when other police were passing through.

One time the Drug Squad was in town, and they asked if they could have a few mangoes from the tree. I offered to help and got the Detective Sergeant’s didle (a net on a long pole that we used to pick mangoes) from his office. It was a bit old, and had some wear and tear but was still up for the task of picking mangoes. As luck would have it, the Drug Squad detectives had parked their car under the mango tree.

I had picked a couple of nice ones when I spotted a giant mango up a bit higher. I was just tugging on the mango trying to get it to release when the Detective Sergeant said, “Just watch out for the hole in the…” Before he could finish his sentence, the mango came free, passed straight through the net and we all stood there watching it in slow motion.

Because we were in such a small town, they didn’t have replacement back windows for their car. We taped it up as best we could, but the guys from the Drug Squad had to drive about 100 miles without a back window.

I look forward to mango season every year. When the mangoes are ripening it means the weather is about to get great.

If you get a chance to try Australian mangoes you won't regret it.

More stories from D-Donohoe and writers in Feast and other communities.