Reports from the Front Lines of America's "Chicken Sandwich Wars"

by David Wyld 9 months ago in pop culture
Report Story

At a time when seemingly every fast-food restaurant is offering a chicken sandwich on their menu, here's a look at the winners and losers in the high stakes battle for the hearts, minds and stomachs of U.S. consumers - and at what lies ahead. 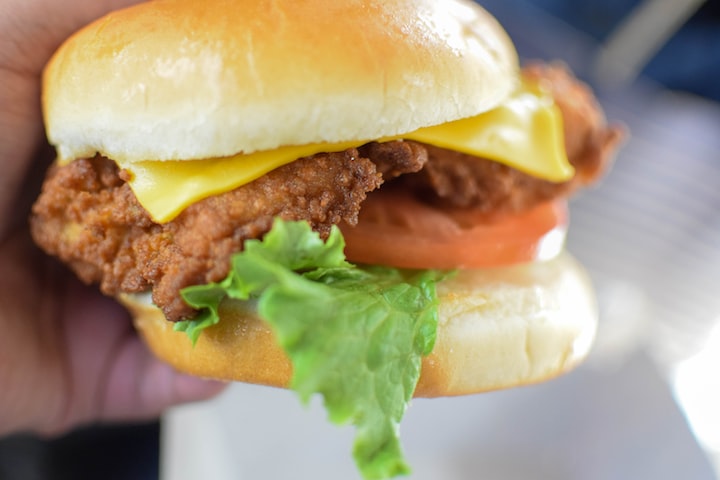 Photo by Jacinto Diego on Unsplash

There are certain subjects that will always spark a heated debate these days in any setting where two or more adults are gathered - at the office, out socially, or in colleges and universities. Sure, things like former President Trump or who belongs in the College Football Playoff will cause intense arguments these days. But if you want to really stir things up with your friends and colleagues and provoke intense conversation, just mention these two words: Chicken sandwiches!

Chicken sandwiches have been on the menu for years in one form or another at many non-chicken chains, but they were certainly not featured items for restaurants like McDonald’s, Burger King, and Wendy’s. After all, these are fast-food burger joints! More often than not, a breaded chicken sandwich was merely offered as the alternative for customers who might not eat beef or simply wanted to order something “different.” If the fast-food place offered a grilled chicken sandwich, that was most often portrayed as the “healthier option” for patrons (accompanied by a mountain of fries and a huge soda, of course!). However over the past 2 years, chicken sandwiches have suddenly become the key battleground for fast-food restaurants across America.

So what is the current status of the “Chicken Sandwich Wars” - and what does all of this mean for consumers and the fast-food restaurant industry as a whole? We will explore these questions in this article.

A Short History of the “Chicken Sandwich Wars”

The “Chicken Sandwich Wars” kicked-off in earnest when Popeye’s introduced their chicken sandwich in August 2019. Popeye’s sales exploded overnight, with the sandwich being so successful (selling in excess of 1000 sandwiches per store, per day) that the company had to put a pause on selling the hot item within just a few short weeks, as overwhelming consumer demand quickly outstripped Popeye’s supply of chicken breasts! The chicken sandwich itself - and the quest of consumers to get one - quickly became a cultural phenomenon. The photo of a Popeye’s worker, exhausted from having to serve so many chicken sandwiches, spread far and wide on social media (and is still a meme today!)...

Customers waited in long lines just to get a chance to purchase Popeye's new chicken sandwich, both at the time of the August 2019 launch and its relaunch in November 2019! But the introduction of the sandwich meant huge - and lasting - sales increases for the chicken chain. And according to one restaurant marketing analyst, the launch of the chicken sandwich additionally generated at least $23 million dollars worth of publicity for Popeye’s!

At least partially in response to Popeye’s, many fast-food chains, both chicken focused (KFC, Church’s, Zaxby’s, Bojangles, etc.) and beyond, rushed to join the fray with their own chicken sandwiches. Even Taco Bell entered the fray with a Crispy Chicken Sandwich Taco, which one writer deemed a “franken-taco sandwich.”

Yes, the introduction of all these chicken sandwiches was a competitive move undertaken by all of these chains, but it also was a smart marketing move. Certainly, all of these chains have benefitted from the same kind of social media buzz and attention as Popeye’s did in 2019 as consumers post their online reviews and comparisons of the various chains’ chicken sandwich offerings...

And of course, simply putting a chicken sandwich option on the menu opens up any fast-food chain's offerings to more consumers, both domestically and internationally, who do not eat beef. But even more importantly, the chicken sandwich offers fast-food restaurants the opportunity for both growth and innovation. According to marketing research from The NPD Group, the breaded chicken sandwich category was perhaps the brightest - and maybe only - bright spot for a restaurant industry that overall, is still grappling with lagging sales and revenue in the wake of the COVID-19 pandemic. Consider these amazing facts about the growth of the chicken sandwich across the fast-food landscape compiled by NPD:

And, beyond just offering “basic” sandwich offerings, the breaded chicken sandwich becomes an opportunity for fast-food chains to create “beyond the basic” offerings (i.e. sandwiches with more toppings), as most quick service restaurants already do today with burgers. This creates the chance for these fast-food chains to have more extensive menu offerings - with higher margin items to spur higher per-customer spending and promote revenue growth for the restaurant. As Jamie Howe, trends and insights lead at the marketing research firm Datassential, recently observed:

“I think the most plausible situation is chicken sandwiches are the next frontier now that burgers are established…. Interesting burger builds have been trending for some time – whether premium angus beef, fancier cheeses or toppings like brisket/pulled pork. There will always be innovation, but those burger trends are more mature at this point. Chicken has more innovation runway” (emphasis added).

Reports from the Frontlines of the “Chicken Sandwich Wars”

The data analytics firm CivicScience recently undertook a major national survey to assess the state of the “Chicken Sandwich Wars” among the major national fast-food chains. What they found provides interesting insights on just how intense the battle is today for the hearts, minds...and stomachs of American consumers over breaded chicken sandwiches.

As Table 1 (U.S. Consumers Who Have Eaten a Chicken Sandwich at Major Fast Food Chains) shows the percentage of Americans who have eaten a chicken sandwich at these major chicken (and non-chicken) restaurant chains. While the CivicScience researchers’ did not give a percentage as to just what percentage of their national survey had eaten any breaded chicken sandwich at any of these major fast-food chains, it would appear that the figure may now be even greater than the two-thirds of all U.S. consumers that the NPD group found to have done so in 2020! And yes, it is indeed amazing to think that approximately three-quarters of all Americans reported having eaten at least one chicken sandwich at both Chick-fil-A and McDonald’s! And in a quite surprising finding, Popeye’s, the QSR chain that ostensibly started the intense battle in the fast food restaurant industry over breaded chicken sandwiches was ranked sixth in having at least been tried by U.S. consumers!

Source: CivicScience, “And the Winner of the Chicken Wars Is…,” November 2021 (Used with permission)

The CivicScience research team then asked those consumers who had indeed tried a chicken sandwich at one of the major national QSR chains to rate their overall satisfaction with the item. As Table 2 (U.S. Consumer Satisfaction with Chicken Sandwiches at Major Fast Food Chains) reveals, Chick-fil-A led the pack with almost two-thirds of their chicken sandwich customers rating the item positively, followed by Popeye’s (at 54%), Wendy’s (51%), and KFC (50%). Interestingly, only these four chains saw their chicken sandwiches viewed positively by customers who had actually eaten their offerings. The rest of the pack were clustered in the 30% positive range. And while all the chain’s chicken sandwich offerings received a relatively low percentage of negative ratings (ranging from a low of 12% with Chick-fil-A to a high of 24% with both Jack in the Box and McDonald’s), what is interesting - and should be of concern to executives at all of these chains - is the high percentage of consumers (between 31% [Popeye’s] and 47% [Jack in the Box] who gave the chains’ present chicken sandwich offerings a “neutral’ rating! This will be discussed in detail in the analysis section which follows.

Source: CivicScience, “And the Winner of the Chicken Wars Is…,” November 2021 (Used with permission)

So, what is the status of the “Chicken Sandwich Wars” today? What it means for competing firms across the fast-food restaurant industry is that chicken sandwich offerings are fast becoming a staple offering for QSR menus, an expected item for today’s consumers. And yes, they offer a great opportunity for growth. However, the findings of CivicScience’s recent research show that U.S. consumers are - as usual - a complex bunch! The high percentage of respondents in their national survey - people who have actually eaten a chicken sandwich at the respective chains - who gave a neutral or even negative rating to the current product offering should be looked upon with yes, great concern, but also viewed as a great opportunity. Chicken sandwiches today offer a great deal of “innovation runway” for all of the QSR chains to experiment and come up with items that offer consumers a “better” breaded chicken sandwich with more topping choices - which also offers the restaurant operators the chance to sell higher priced, higher margin offerings to their customers. The expressed dissatisfaction with present menu offerings thus presents the management of these restaurant chains a very real sign that innovation and experimentation with menu offerings will be needed - crucially needed - if the momentum for chicken sandwiches is to be continued.

And so the challenge - and opportunity - for all of these QSR chains is there. They should be concocting all kinds of new sandwich offerings in their test kitchens and rolling them out to market as quickly as possible. And as for us consumers, get ready for more fancy buns, fancy cheeses, fancy toppings - and yes, higher prices - as the Chicken Sandwich War moves into the next phase of battle! It will be a delicious kind of war in the battle between the major fast-food chains in the months and years ahead!

More stories from David Wyld and writers in Feast and other communities.