by Noel Anderson 28 days ago in fact or fiction

Food can be a powerful a aphrodisiac! 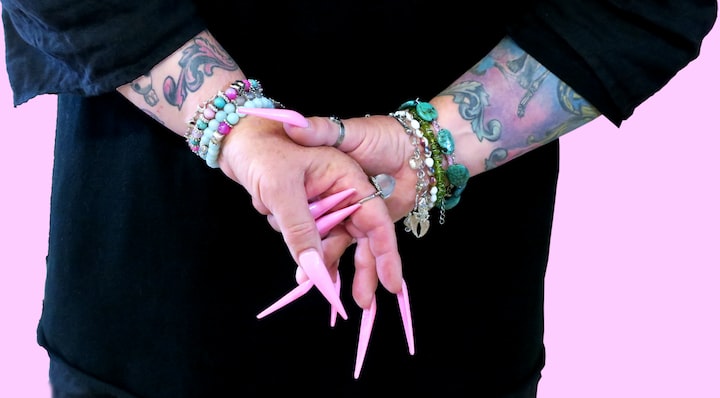 The shop was pretty ordinary, situated on Exhibition Street opposite the Comedy Theatre. If you blinked, you’d miss it. They sold crab claws, the best in Melbourne so the sign in the window outside stated. Mrs Cray stood facing the red and gold oriental door and wondered if she should try them, rain pelting her, clothes soaked to the skin. It was an hour before her lift to Barbara’s house, her complaining sister-in-law. Well, thought Mrs Cray, I suppose John’s death five days ago has finally given you something to really bloody complain about. Cruel thoughts about Barbara given the circumstances…but true none the less, Mrs Cray believed.

Mrs Cray glanced at the shop door, she was hungry after her flight from W.A and the short black she’d downed at Perth’s airport was wearing off, her naturally grumpy disposition was starting to shine through, maybe a serve of crab claws would set her right for the long drive to Frankston and her brother John’s funeral.

Mrs Cray looked at the sky, she hated Melbourne’s grey wintry days, more than she hated living in Perth, but not as much as she hated her ex-husband. If only she could escape from life in Perth, her divorce and her mobile phone bills, maybe…just maybe she’d be happy. Melbourne’s bleak winter’s day, however, was not the answer to her problems. Mrs Cray pushed on the door, shook off her endless thoughts of Barbara, and entered the shop.

Sue Lin (a control freak and a green tea addict) had taken up managing the restaurant eighteen months earlier, she’d been watching Mrs Cray from inside and hoped the petite lady with the Prada bag would enter The Golden Empress, as business had been slow this winter. Sue Lin examined her reflection in the silver cooking urn, she liked her fine features and pointy chin, carefully she tucked her blouse ends tightly in her skirt and walked to the front door, catching Mrs Cray by surprise.

“Are you waiting for someone else?” Sue Lin smiled, her expression barely shifting.

“A table for one. I’m no romantic on days this cold and wet I’m afraid.”

Sue Lin wondered….what an odd comment? Confused and wanting only to please, she decided to ignore the comment totally. But, she could not ignore Mrs Cray’s superb Prada bag.

“Madam what a lovely bag,” she smiled brightly. “Now we have nine out of ten tables available, take your pick. Perhaps away from the chill might be best? I think the back table you’ll find most comfortable.”

“My father says they are better than good, they are yummly“

“Okie dokie claws it is.” In the blink of an eye, Sue Lin moved within an inch of Mrs Cray’s right ear and whispered, “I promise you won’t be disappointed. Now follow me, madam. We have several varieties…smoky butter, curry sauce, sweet and sour…and stuffed! My father’s personal favourite!”

Mrs Cray looked at Sue Lin’s frozen smile and wondered…? The shop was deserted except for a handsome backpacker seated in the far corner. She hadn’t seen a man that good looking since she skinny-dipped on the Gold Coast in her uni days…living in Perth does have its drawbacks! I wish I could fit into that red bikini now, she thought. Now, what was she here for…? Yes, that’s right, the crab claws.

Sue Lin walked Mrs Cray down the centre aisle, wiping a table or two along the way with a dry serviette, seating Mrs Cray table length away from the backpacker.

“Yes,” Mrs Cray nodded, slowly unbuttoning her cardigan. “A Bloody Mary. Just kidding. The house Sav Blanc is fine. Served with my claws, not separate, drink and food together, understand? Are the claws fresh?”

“Oh, one last thing. I’ll have my claws stuffed with a little curry sauce on the side. Hot and spicy.”

Mrs Cray pulled her cashmere cardigan off her shoulders and draped it gently over her chair. It was a chilly restaurant despite the bar heaters being on full. She took a deep breath, sat down, sighed and thought about John’s funeral. The backpacker looked up from his plate of claws and winked, she smiled back blushing bright red.

“Lady?” he whispered in a soft American accent “For what it’s worth I ordered the claws too. They’re good. My friend turned me on to this place, there’s not much to look at here, but the claws are good. In fact, they’re yummly.” The backpacker winked again, chuckled to himself and licked his fingers.

Mrs Cray begged to differ; she felt there was a lot to look at, and that the young man on table ten was indeed…very yummly. The backpacker raised his beer glass and toasted, smiling a smile that could power up the hundred poker machines in the nearby Lion Gate pub. Caught off guard by the gesture and his dazzling pearly white teeth, Mrs Cray quickly pulled her iPhone from her Prada bag and dialled, turning her back ever so slightly on the handsome man-eating sweet and sour claws on table ten.

“Hello Ben? I’ve arrived. I’m in town, opposite the Comedy, just grabbing a quick bite. I’m having claws actually, these ones are supposed to be the best in town. Jeez, Melbourne can really turn it on…the rain I mean, bloody cold here, not like the Perth. Yes, it’s a terrible way to go. I’d sooner choke on a meat pie than die like that, poor John. I cried all last night, honestly. No…I’ve no idea how Barbara is coping. They said they had to cut John out of the car, can you believe it. What do they call those bloody things? You know the cutters?”

“The jaws of death,” the backpacker interrupted sucking loudly on a claw, crab claw, juice running down his chin.

“Of course. Silly me. Not claws Ben…jaws! Thank you young man” she giggled… like a school girl on her first date.

“You’re most welcome madam” he smiled, tucking into his plate of yummly claws like a dog to a bone. At that moment, Sue Lin turned the corner holding a large plate of succulent stuffed crab claws, a bowl of curry sauce and a chilled glass of white wine. Placing the claws delicately on the table, Sue Lin looked Mrs Cray directly in the eye, raised her right eyebrow, skipped out of the room, hanging the closed sign on the door along the way.

How oddly odd thought Mrs Cray, what is wrong with everyone here?

What Mrs Cray didn’t notice was that the backpacker had polished off the entire plate of sweet and sour claws and was starting to feel uncomfortably sexual. A peculiar pink flush coloured his cheekbones, blood pumped through his veins like a wildfire.

Unaware of the strange air creeping in, Mrs Cray tucked her napkin into the top of her blouse and picked up her first crab claw. It was soft to touch, fleshy inside and fresh. She lifted the lid off the curry bowl and dipped the spongy claw into the bubbling curry sauce. How odd, it’s boiling but there’s no heat. What followed was unexpected, it was curiously curious in fact, Mrs Cray lifted up the curry sauce bowl high above her head and tipped the entire contents over the plate of fleshy crab claws. Mrs Cray had no idea why…and I suppose in the scheme of things it doesn’t matter.

What’s important is what Mrs Cray didn’t see! She didn’t see the backpacker’s strange reaction to the dumping of the sauce. Slowly he stood up and started to loosen his shirt, heart pumping, eyes dazed. “No matter what happens tonight,” the backpacker thought to himself, ‘I have to have all those curry claws, and possibly Mrs Cray too!”

“Excuse madam. I don’t mean to be rude but could I share that plate of juicy claws with you. I’m finding the smell of curry and crab claws too much to resist. I have been travelling for days, the allure of your claws and curry plate is frankly my dear overwhelming. Please don’t make me beg, slip out of your shoes off, relax…share your claws and curry sauce with me. I demand it!”

Mrs Cray could see in the traveller’s eyes he was desperate for her spicy curry sauce and stuffed claws. Mrs Cray thought long and hard before she answered the extremely good looking man, who by now was nestling into her right bosom, a stone’s throw from her meal. Mrs Cray pondered the facts for a moment in her head…Barbara was after all still an hour away, almost…Melbourne could be a very lonely place on wet days and things hadn’t been so good for her recently, romantically. So, catching a whiff of those claws and that sweet yummly sauce on the backpacker’s breath, Mrs Cray gave the only answer she could, under such curiously curious circumstances. Mrs Cray simply winked and said…YES!

Mrs Cray didn’t make John’s Funeral that day, something Barbara has never gotten over! Why should she? Mrs Cray didn’t care for Barbara’s opinion, her brother John if he was still alive would understand and forgive her, she honestly believed he would! She never caught up with her best mate Ben either. What Mrs Cray did do was find a cheap hotel room close to The Golden Empress and spent an entire week eating stuffed crab claws with curry sauce and entertaining tired travellers.

Around the world to this day, travellers whisper about The Golden Empress, opposite Comedy Theatre in Melbourne. It sells the best-stuffed crab claws in the world, you know. The perfect place to go when you’re a stranger in town.