Because June is the month for weddings, and fathers too. 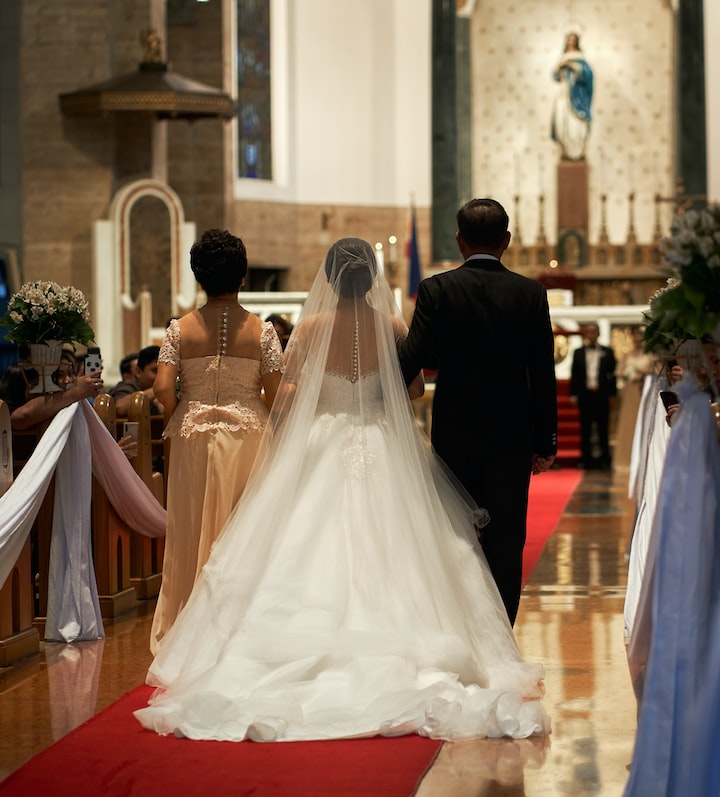 Photo by Norbert Braun on Unsplash

My father didn't cry at my wedding, and I was glad. I wouldn't have known what to do or how to react if he did. In fact, I went to great lengths to ensure that he wouldn't, because if he, someone I never saw cry, started crying, then I would start crying. That included abolishing the traditional father-daughter dance (though it wasn't the only one my husband and I abolished), and thus saving myself from the heart-tugging, tear-jerking beauty of the song Butterfly Kisses. I'd already succumbed to that song once, in one of my classes at university, and I didn't want to ever do so publicly again.

(Now we can tear up in the silence and privacy of our homes.)

Sure, I was the only daughter, and the eldest. I'd lived with my parents for so long, at some point we all probably thought it was going to last, or at least we'd continue to have a similar arrangement. Plus the pandemic came and added almost two years of near-constant togetherness to our already tight-knit family of four. We worked out together, binged Netflix films together, sat doomscrolling through Facebook together, quarantined together. For a moment there, marriage had been quite out of the picture, though I'd been with my then-boyfriend for a long, long time.

Then, in what had felt like the blink of an eye, I was off to tie the knot, and leave the country a few months later. It was unreal, and almost like a movie plot, even - especially when a devastating typhoon hit us two weeks before the big day. (A story for another time.)

The fact that I was leaving the nest didn't really sink in until I was right there, in the middle of the church, halfway through my bridal march. Until I hugged my father, and he squeezed me back a lot tighter than what we'd rehearsed.

I know I gotta let her go, but I'll always remember...

If it had been a movie, that would've been the perfect time for a montage. It would start with scenes I had absolutely no recollection of, like being held by my father as an infant. Or maybe of him changing my lampin, the good old cloth diapers of days past. (It's a movie, remember? Whether he actually did so or not, you'll have to ask my mother.)

Then there'd be the infamous story of me running around our apartment, right smack into a display cabinet, and breaking the glass. In truth, my toddler forehead had been miraculously unscathed, but the movie version would've had me bleeding and crying for my parents. My father would've then come to the rescue, appearing in the doorway with his arms akimbo and a cape fluttering behind him like a superhero. Just super.

There would be a footage of him teaching me how to play Galaga on our Nintendo Famicom while my mother's busy in the kitchen. Being a movie, of course we'd get sucked in, Jumanji-style, and we'd have to blast our way out before dinnertime. We'd also finally be treated to the backstory of our 'secret handshake' to the tune of The Jungle Book song Bare Necessities, which I do not remember at all, only that we would sing those two words over and over while shaking our booties and then hip-bumping each other. Some manner of tragedy was most probably involved, because, you know, of the whole 'tragic backstory' storytelling requirement. Maybe they'd take that time my aunt brought a whole chicken to cook, and my brother and I thought it was the chicken we'd tried to raise. Tragic.

There would be many more, and in every scene we would both grow older. His bedtime stories about an ant colony, where all he really did was rattle off the number of the eggs (egg #1, egg #2, and so forth) until my brother and I fell asleep. Those years he got me obsessed with basketball that we'd shoot hoops outside and even watch the championship games on TV during exams week, to my mother's chagrin. Bringing home a Star Wars book he'd borrowed from an officemate and later on watching the movies with me on likewise borrowed VCDs, sparking my love for the franchise. Driving me to and from the bus pickup point every day in high school, and how I'd roll my eyes when he'd start reciting his checklist of items that we shouldn't forget: ID, eyeglasses, socks, shoes...

Older still, when I'd flunked a Math test in college and he'd come to talk to me about how he'd struggled with academics as well. Because we're imagining a movie though, he'd have a grandiose speech instead of his simple reassurance that it was okay to fail, complete with sweeping orchestral music. Some more scenes and fast forward a couple more years, when we'd tricked him into going on a trip to Singapore because he'd never travel out of the country with the family. It would likely be framed side by side, making it appear that we'd arrived via the same flight, simply because it would be more exciting that way. My mother and I would duck behind the luggage along the airport carousels while tailing him and my brother like pro stalkers, hail a taxi that would travel with such speed you'd think we're in a Fast and Furious film, and give him enough of a fright when we finally reveal ourselves - in a dramatic fashion, of course! - that my mother would have to give him CPR. (Ew, gross. Parents. But my father loves romance movies, so this is almost obligatory for an imaginary movie montage.)

Then everything would slow. There would be the sensation of falling, our lives flashing in front of our eyes. It wasn't death we faced, but it was something just as emotional and profound.

Every hug in the morning and butterfly kisses...

But that drama, that montage, was a reimagining. In reality, the hug lasted for two, maybe three seconds tops, and I barely had the time to think or do anything except notice that it was a little unusual. He didn't have the time to say anything, either. We simply continued with the ceremony as we were taught and made to rehearse, conscious of all the eyes and cameras around us. I hugged my mother and kissed her on both cheeks; I knew she wasn't going to cry, so she didn't worry me. Then I interlocked my arms with both my parents' and we walked forward to meet my groom. To face our future, together.

It wasn't much of a moment, but it was all that I needed. Love was all I needed. And love, more often than not, was found in the small things.

More stories from Marie Sinadjan and writers in Families and other communities.