by Victoria Shearer 11 months ago in fact or fiction

Taking a Chance in a Hangover Haze 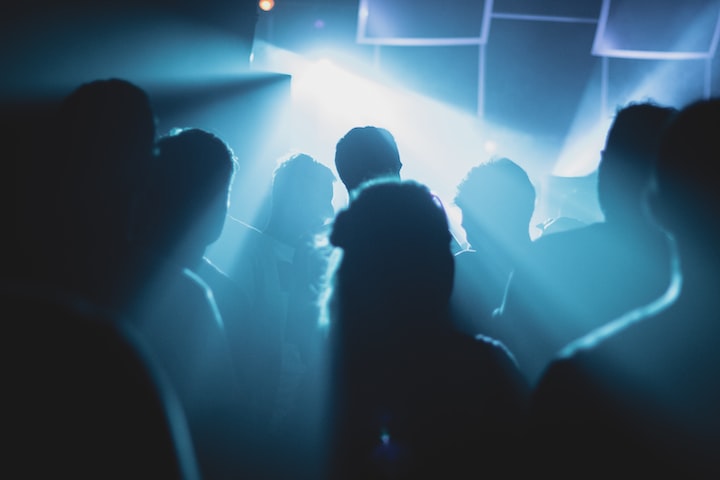 Photo by Baptiste MG on Unsplash

The lights were pulsating with increasing intensity and the floor was shaking from the bass. You could almost feel the sweaty condensation ready to drip down the walls. The air was close with the heat radiating from the moving bodies drunkenly sauntering around the dance floor.

Lianna felt nausea overtaking her senses and knew she had to find the easiest route to the bathroom, but unable to navigate it in the haze, she opted for blind determination in the hope that everyone would move out of her way. Ordinarily she would scold people that unceremoniously used their elbows as battling rams, but in this case, it was a necessity.

Thankfully, there was an empty cubicle when she barged her way into the bathroom, and even the foul smell couldn’t deter her from throwing herself down on the seat. The walls were spinning and the music felt distorted in her ears, but this was all par for the course, and she knew she’d be ready to get back out there imminently. She read the scrawling graffiti on the wall to steady her vision, some of which provoked an audible chuckle… Some people became quite the lyricists after a few too many drinks.

Steadying herself, Lianna stood up and took a moment to make sure she was stable on her feet. It was at this moment that she spotted something, stuffed behind the cistern. Ordinarily she would stay well away, but hygiene went straight out of the window owing to the alcohol, so she curiously tugged at it. A little black notebook sprung forward, which she caught in the nick of time, save for a few papers here and there.

Aside from being found in an unusual place, something that didn’t even register to Lianna at this point, the book was surprisingly clean for such a location. The spine was worn from how many extra pages had been added, but beyond that, it was relatively spotless. She opened the notebook but looking down created a vertigo-like feeling, so she resolved to pop it in her handbag for a closer look later.

Before her eyes were even fully open, Lianna felt the overwhelming sense of dread for the pain that was about to strike once the sun touched her eyes. She relished the last few seconds of relative peace before rolling over to check her phone. She couldn’t remember what time she went to bed, but she knew she was awake far too early to have slept off the alcohol, but it was better to bite the bullet than wallow any longer.

As she stumbled to the door, still not daring to fully open her eyes, she did her best to avoid the belongings carelessly strewn across the floor. In doing so, she sacrificed her handbag over the glass of water precariously left there on route, clearly where her drunk alter ego was trying to limit the morning hangover. As the bag tipped over, spraying the floor with various items and (thankfully) her bank card, out fell the little black notebook. Taking a precautionary deep breath before leaning over, she picked it up and tucked it under her arm.

Much to Lianna’s surprise, the rest of the house seemed perkily awake, and thankfully one was already half-way through making a communal fry-up. The greasy smell alone was enough to sharpen her senses back into reality and invoke a feeling of redemption.

Throwing herself down on the sofa, she opened the book. Although much of the writing was hastily scrawled, she could make out enough of the pages, most of which seemed uninteresting. Business jargon took up at least half, until she came to the middle, where it was obvious that pages had been torn out. One page remained, clearly missed by whoever had recklessly ripped away at the section, and that is where her interest was piqued.

This page didn’t have a date like the others, and the ink was different too, clearly running out to leave the text engraved more than it was written.

If it hadn’t been for the unusual writing, this wouldn’t have caught her eye, but when you added up that this address and postcode was a 10-minute walk from her house, she was intrigued. Never one to shy away from curiosity, and despite her blurry state, Lianna was instantly drawn in. 10pm wasn’t the usual time for people to meet, especially not someone professional as would be assumed of the notebook owner, and the money alone was enough to get cogs whirring.

Before she could get too deep into her thoughts, the saving grace of breakfast was ready, and she moped her way off the sofa and into the kitchen.

Resisting the urge to get right back into bed, Lianna grabbed a towel and got into the shower. The water was somewhere between soothing and overwhelmingly hot for her fragile stomach, but she powered through it in the knowledge that she’d feel better after.

She allowed the water to envelop her for far longer than the shower needed to last, but she could feel herself coming out of the other side, and her mind was beginning to spark with thoughts about the notebook. The location seemed too wild a coincidence, especially given that she’d found the book on the other side of London, and the mystery gave her a buzz that she couldn’t ignore.

Curiosity killed the cat, as they say, and maybe it was about to kill her. She knew the area like the back of her hand, but everything was eerie in the dark, so she felt shivers up her spine despite hiding in the shadows away from view.

A shady figure appeared across the courtyard, clearly having lurked in the shadows just as she had, yet thankfully she hadn’t been spotted. The man carefully laid a sports bag down on the frazzled grass beside a tree. The location was clearly well calculated: Not too close that it was in the darkness, but not so far out that it would be noticed by a casual passer-by.

Lianna couldn’t explain it, but her intrigue got the better of her and she skulked out from the darkness, trying to look nonchalant in her movements. She saw her moment of opportunity, and less risk-averted in the remnants of her hangover, she made a dash for it. There was something about the situation that made her feel like she was in a surreal murder mystery, and like her actions didn’t have consequences. Of course, moments after having the bag in her possession, she immediately questioned her decision. It was far too late by then, of course.

Having watched enough dramas online, she knew better than to open the bag there and then, so decided to go further afield. She didn’t want anyone following her, especially back to her house, not knowing how she would explain this to her beloved housemates.

After turning a corner, Lianna ran. She ran like her life depended on it, keeping her head low, just in case. This wasn’t a spy drama, this was real life, but it wasn’t worth abandoning what she’d seen on various TV shows just yet.

With her hat pulled down low and her hoodie zipped up high, she found a darkened corner to open the bag, praying that she wasn’t in eyeshot of some probing CCTV camera. As much as she was questioning her decision to collect the bag, she wasn’t afraid to admit that she was feeling extraordinary thrilled.

The zip was unrelenting, but she found a careless gap in the stitching and ripped it open. Notes flew from the bag, and she audibly gasped, almost certainly loud enough for someone to hear. Gathering herself back together, she delved further into the bag while simultaneously grabbing money from the floor. £50 notes. More paper money than a mere student had ever seen in her life.

Back at the house, Lianna found that her housemates had barely shifted since she left, and she partially lamented that she hadn’t just stayed where she was. Checking her peripheral vision in the hope no one had seen her, she creeped her way upstairs, determined not to be spotted.

She sat on her bed, the covers askew where she’d almost rolled out a few hours previously, she pried open the stitching on the bag. She wasn’t sure why she was so cautious, given that the damage was done, but she needed some limitation on the amount of accountability and regret she felt in the moment. Slowly peeling back each side of the bag, she felt the separation of various stacks of money, and threw caution to the wind in pulling it all out.

It was in that awe-filled second that someone tapped on the door, politely knocking with every intention of just walking straight in. There stood her housemate, a cup of tea in hand, looking down at Lianna and her newfound array of cash in complete shock.

At this point, she had no choice but to tell them everything, even though there wasn’t actually much to explain. Found notebook, read notebook, saw location, staked out location, stole money. That pretty much summed it up.

It took very little time for the 5 of them to congregate. One housemate was completely gobsmacked and evidently thought she was crazy, another was frozen in place and clearly didn’t know what to think, and the final housemate looked like he wanted to throw it in the air like a film character. Lianna was mentally in the centre of the Venn diagram connecting the three.

Shock affects people in different ways, yet all of these reactions were broken by a laugh of disbelief from one, which became contagious to the others. They all, despite their differing feelings towards the situation, were at a loss for what else to do.

The most sensible housemate of the group came up with two options:

1) They gave the money to the police, risked a stern talking to for some unknown crime, and were absolved.

2) They kept the money and did whatever they wanted, as quickly as they could.

It goes without saying that the final group vote settled firmly on option 2. Lianna looked around the room and briefly felt an overwhelming fondness for the four of them. They clearly hadn’t batted an eyelid at this having become their problem, despite Lianna putting them in the situation, and she knew that the money wasn’t the primary reason for it.

With all the hurried planning of a budget Oceans Eleven, they had a plan. Firstly, this stayed in the group, and absolutely could not be revealed to anyone else (it was specifically stated that this covered anyone that dare mutter ‘I shouldn’t tell anyone, but…’). Secondly, they needed to get rid of the physical notes asap.

Now, fancying themselves aficionados in the nuances of theft and money, they knew they couldn’t simply cash it in at the bank. These could be marked or being looked for by the police (both phrases they never envisioned themselves saying in a real-world context).

This is where their insight finished. They were not experts in going as far as money laundering, and nor did they want to be, so they did the only thing that a student could possibly justify doing. They laid the groundwork for one hell of a party.

Read next: A Brush with Criminal Law and Privilege