The Most Devastating Thing a Teacher Ever Said to Me

by Jessica Conaway 24 days ago in Humanity 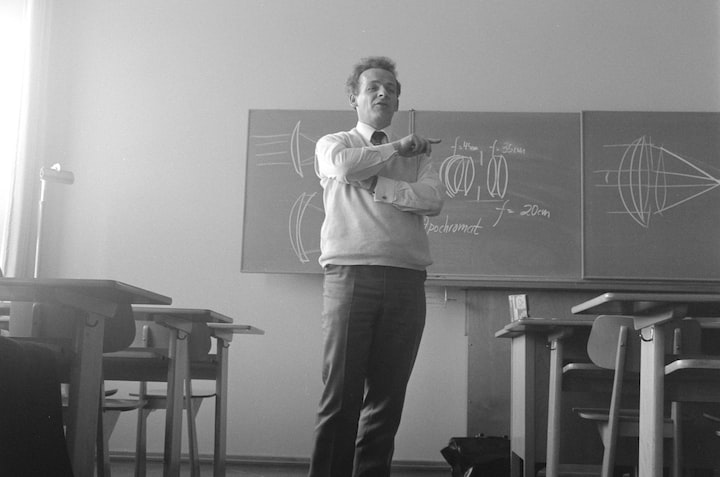 At the beginning of February, I’d been unceremoniously laid off from a job I loved and spent the next nine months unemployed, gravely depressed, and slowly developing a methamphetamine habit. By the time I finally found another job, I honestly didn’t know who I was anymore.

I was hired as a prevention educator for the local domestic violence shelter. It was very hard work for very little pay, and the professional atmosphere was absolutely toxic. The clients were great, but dealing with the vindictive backstabbing and blatant bullying from the supervisory team was similar to navigating a minefield, and most mornings I cried until I vomited before getting in my car.

Thankfully my position took me out of the office most days and into the schools across the city to talk about stranger danger and healthy relationships. Even though I truly enjoyed this part of the work, it wasn’t even remotely where I saw myself at this stage of adulthood; single, barely making rent, scrounging for change to buy cigarettes, and constantly borrowing money from my parents.

One afternoon in late spring I found myself walking the halls of the very elementary school where I’d spent my formative years nearly two decades prior. These halls were filled with so many sweet firsts that were now my last best memories; reading my fall poem aloud for parents’ night, getting to play Raggedy Ann in the school play, making a best friend, and planning my very first birthday sleepover party during recess.

I followed the school secretary down a newly-built wing of the school and into a state-of-the-art classroom that made me sad in a way I didn’t understand. I didn’t recognize this part of my dear school, but I absolutely and immediately recognized the teacher at the front of the class, and a wave of nostalgia punched me right in the gut.

Mr. Scheetz was one of the best teachers I’d ever had. He was fairly young then — just a few years out of college, I think — because he was still full of energy and a passion for teaching. Everyone wanted to be in Mr. Scheetz’s 5th-grade class because he was known for fantastic pranks and great stories. He sat on his desk, and when we told him jokes, he laughed a big, booming laugh that echoed down the hallway.

He was essentially a superhero.

Mr. Scheetz wanted to be an author. He wrote a young adult series about growing up in the 60s, and he’d read it to us right after recess. To my knowledge, it never got published, which is a damn shame. That series, and the man who wrote it, fueled my love of reading and writing, and that very year I decided that I was going to be a writer when I grew up. Every night I scribbled out fantasy fairy stories, scary tales about haunted factories, and sappy poetry about changing seasons and boys who were way too cool to give me the time of day. I even won an honorable mention in a writing contest that year — a feat I wouldn’t replicate until 31 years later.

But here in the present day, Dave Scheetz was a just man nearing retirement. He sat behind the desk rather than on it, his movements guarded and his eyes tired. His students still watched him with reverence and respect, but there was a strange and unsettling pall in the air. Mr. Scheetz had hung up his superhero cape, it seemed.

“And guess what?” I said to the class. “Many many years ago, Mr. Scheetz was MY 5th-grade teacher, too!”

Mr. Scheetz studied me then, and recognition slowly crept over his lined face.

The class laughed, but Mr. Scheetz was silent. After a moment, he quietly said the eight most heartbreaking words anyone had said to me until that point:

“I always thought you would become a writer.”

That sentence hung in the air for a moment before hitting me right in the chest and filling my veins with ice. My mind went completely blank as I sputtered, “Oh, well, I still do that, too.”

Except aside from a poorly executed outline for a supernatural YA novel that I’d started and stopped about a dozen times, I hadn’t written anything in years. In the back of my messed-up brain I knew that I would never become Stephen King or JK Rowling, and if I wasn’t going to get rich and famous and universally loved for characters I’d created, then what was the point of it?

I finished the presentation, but I was really only going through the motions. By the time I got home that evening, I was furious. Who the hell was this guy to tell me what he thought? He knew me for like, a year in the late 80s. He didn’t understand that people just don’t become writers; writers don’t get health insurance and steady paychecks, and I sure as shit couldn’t afford to go without either. He doesn’t know my life or my struggles…so why does he get to be disappointed in me?

These were the lies that I used to shield myself from my own failures. I could have made very different choices — even as early as 5th grade — if I had listened to my gut instincts and trusted myself. Instead, I chose to follow other people’s dreams, made stupid mistakes, and learned the fine art of justification and gaslighting myself.

That sentence danced around the back of my brain for 10 damn years, until one uneventful night in 2019 when I decided to sit down and write a story. That story led to others, and those led to websites that actually wanted to publish more of my work.

This summer I took a giant leap of faith and applied for a job as a travel writer.

And they actually hired me.

So, Mr. Scheetz, wherever you are…I always thought so, too. It took me a while, but I am a writer.

So thanks for that.

Author's Note: a version of this story originally appeared at: https://medium.com/tell-your-story/the-most-devastating-thing-a-teacher-ever-said-to-me-744864ea433