It Just Tastes Better Up There

in the summertime, happiness has an extended shelf life 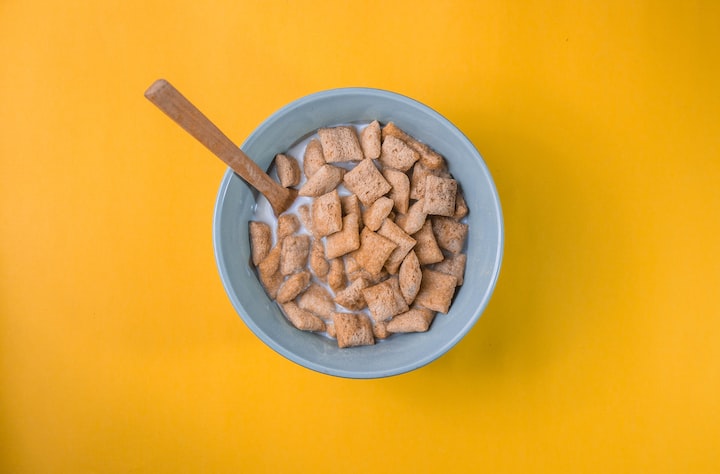 Photo by Fran Jacquier on Unsplash

In my childhood home, a bowl of cereal was made to feel like a shameful decision, but at Camp Bravo, it tasted like summer.

I was fifteen the first time I went to sleepaway camp. I'd never had a real urge to go. As an 80s/90s kid I'd grown up watching Salute Your Shorts, and iconic films like Camp Nowhere, but even though it would have been nice to get away from my chaotic home, sleepaway camp seemed to be all about immersing yourself in nature, bugs, tents, and sports. No thank you.

But one day in 1998, the directors from Camp Bravo showed up at my high school. My classmates thought the video they played us was cheesy, but I drank the bug juice. I chugged it down hard.

I knew immediately that I had to go to this camp at any cost.

And while the lessons at camp, which spanned both theatre and humanity, were great, there's nothing like Camp Bravo breakfast.

A normal camper goes through a cafeteria line, picks up lukewarm eggs, a scoop of yogurt, and a watery, orange-hued drink, and sighs, recalling how much better breakfast is at home.

But for me, camp breakfast created an instant feeling of being alive and cared for; especially the CEREAL!

Campers walked through the kitchen line to get their hot selections of the day and then back out again to the main hall where we were greeted by a long Formica table with clear canisters of dry cereal.

There was no novelty cereal in my home. Mostly we had healthy selections like Raisin Bran with bland, fat-free milk. Occasionally cheerios made their way in, but even those heart-healthy oat circles were frowned upon.

In the late 80s, before everyone built up their toxic disordered eating habits, we'd sometimes end up with those variety packs filled with eight tiny individual boxes. My sister and I would fight to be the one to get the Lucky Charms. One serving and then they were gone, sometimes for years.

But on my first morning at Camp Bravo, a canister of crunchy, golden, nugget-shaped pillows of processed corn and oat deliciousness called out to me from the table where it say next to the Fruit Loops, Honey Nut Cheerios, and Cinnamon Toast Crunch.

I didn't even know what it was because we'd never had it at home. But something just felt right. And even though I had never been into men in uniform, I fell truly, madly, deeply in love with a Captain.

Captain Crunch, that is.

That first bowl of Captain Crunch with 2% milk was one of the most delicious things I'd ever had. And as I chewed those sweet, crunchy delights, and swallowed them down... for just a moment, I was normal.

I was not a 15-year-old girl who was regularly shamed for having the nerve to be built a bit curvy. I was not the recipient of my mother and older sister's toxic diet-culture beliefs that as chubby people we should always be a little bit hungry.

I was just a person who got to enjoy food.

The milk they served Camp Bravo had an extended shelf-life, and to be honest, I'm still not sure exactly what that means or how it works. But it's perfect in a way, because at that magical place where my soul found a home for 10 summers as a camper and then a counselor, my body found a safe place as well.

We ruin food for so many people, but especially young girls who have the nerve of living in an emaciated vessel that does not resemble a plastic doll.

There was no sugary cereal during the year, but at camp, there was love and acceptance, and a reliable, comfortable, unconditional love affair with a cartoon captain.

But give me cereal and milk any day and you will take me back to the time I sat in the middle of Homet (Oh-May) Lodge, awaiting a magical day of learning how to "elevate my talent" as the pamphlets promised.

More stories from Bonnie Joy Sludikoff and writers in Confessions and other communities.