I Get Five And She Gets Seven?

Why It's Worth It To Divide Items Equally, As Seen Through The Eyes Of Two Small Children 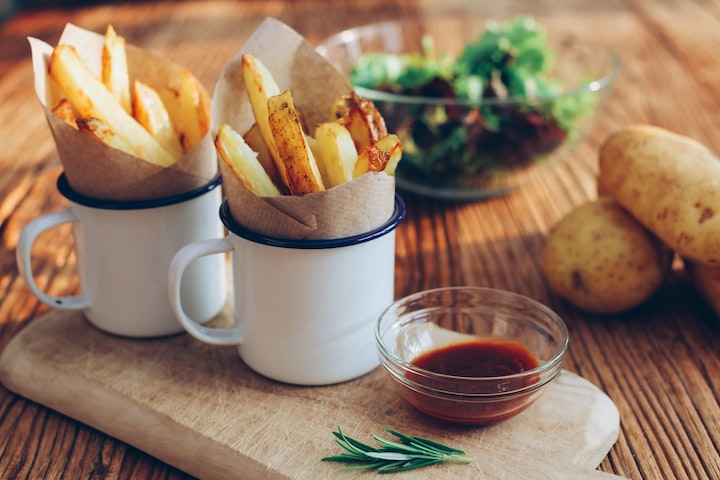 I will never forget these words, because they have never failed to make me laugh. I can literally still picture this little boy- he was like a mini version of a middle-aged Jewish lawyer. He was being dropped off for an hour in a kids-club at the gym where my mother briefly worked in the early 90s. I was there as a special assistant, otherwise explained as, my mom did not want to leave me home alone.

The little boy's mother was about to run into the gym for a workout and had obviously not fed her kids, who were probably 6 and 9 years old. She portioned out one chicken nuggets happy meal. One happy meal for two kids- she put their portions on a few napkins, laid out on the cheap crayon-stained formica table.

Two chicken nuggets each, and a small handful of fries. Honestly, it was really small, even for two little kids.

"I get five and she gets seven" little Bernie Steinberg said disgustedly. Okay, not his real name, but it could have been. I don't remember if there was a response, and while you could argue that that kid was probably a nightmare, he was right.

Again, let's be clear- it was too small of a meal for two kids to be expected to share. But forget about there not being a satiating amount of food- the real takeaway is, if it's countable, count it.

As a nanny of many many years, I don't know what kind of rookie gives one kid FIVE fries and one kid SEVEN, but honestly, Encino mom in 1993, you deserve any wrath you got that day.

All joking aside (...am I joking??) it's so important to teach kids about perspective. It's a much-neglected topic that I have seen parents successfully navigate with their kids.

Now, I always try to be empathic of big feelings, but when those big feelings are about stupid shit-- after I let those feelings be expressed, I like to take a moment to see if it's worth it to lose an entire day.

For instance, "Rex...I see that Coco accidentally impacted your drawing that you've already crumbled up and thrown away, by completely non-maliciously dropping a speck of glitter on it. Oh, thanks for apologizing Coco. Yes, it's ok if you're still unhappy that happened, but we're not going to hit her. And, I actually have a really fun day planned for us, but I want to make sure we can all calm down before we go out to the museum, so let's get our perspective in check and see if we even need to be upset about this. Can we let it go?"

But you know where perspective is just not needed? When there are only 12 McDonalds shoestring french fries- which is not even enough for one child past toddler age.

Trust me here, caregivers: cut the cookie or the cupcake carefully. Give both the kids a chicken drumstick, and if there is only one, don't give it to either of them- take that drumstick and hide it. In a world where kids have to learn that life is rarely fair- this is not the time.

Acknowledge and understand that your hungry child has no perspective and even if you just fed them 18 snacks, they are still STARVING. And even if they can't do math yet, they can see if you didn't properly divide one large portion into two equal portions.

Also, don't give them two different things to your kids unless you've really given it some thought. Case in point, a very petty memory from my childhood that I also 100 percent stand behind to this day.

I must have been 9 years old or so. That would make my sister 14 or 15. We were having baked potatoes with microwaveable cream of chicken soup- a meal my mother prepared a few times a month in spite of the fact that I hated it. (Although frankly, it sounds delicious now...)

As a treat, she had gotten dessert. We really rarely had dessert- sweets were tightly monitored, as part of the major load of eating-disorder level dysfunctional messaging that were slowly being programmed into all of us kids one monthly box of snack wells at a time.

Was I a brat? Honestly, I would have no problem accepting and admitting that, but as someone who grew up to be like the best nanny ever, I just want to make a few points. Granted, crying doesn't help defend my points, but let's look at this.

1. If you buy TWO candy bars and you buy my sister's favorite and one I don't even like, that's just cruel. A tootsie roll isn't even a candy bar, Mom.

2. I had like 3 favorite candy bars and was not picky. Any actual chocolate candy bar would have been fine.

3. As a 9 year old no one listened to me and I felt incredibly invisible and betrayed. That sentence sounds goofy on one hand, but also incredibly logical, even as a non-petty 39-year-old. I was not a kid who changed her mind- there was no miscommunication where I once told my mom how much I loved tootsie bars. This was not my fault. I liked MMs, Snickers, Milky Way, literally anything without coconut. Failing to get me something I liked made me feel like my feelings did not matter.

4. If you are just a real busy parent and you don't want to take 3 seconds to ask about preferences, just get the kids the same thing. If we both got Tootsie Rolls it wouldn't have been a problem.

While I encourage you to gently teach your kids perspective and to feed them before they get hangry- I am not even being facetious when I tell you to make them feel like things that CAN be fair, are.

This was a missed opportunity. On the bright side, it's one of 100 moments of injustice from the childhood that inspired me to be an activist. I'm only half kidding.

Not only should you know your kids absolutely favorite candy bar- even if it changes and you have to check in about it on a quarterly basis, you should know other stuff. Favorite color. Biggest fear. Favorite movie or TV show. What they want to be when they grow up? These are questions you should know the answer to at age 3 and at age 30. If you didn't know that was part of your job as a parent, now you do.

Life is hard, but your kids don't need to spend their childhood learning that things are unfair and the world will make them feel invisible at times. I promise the world will show them that. Their home needs to be a place where they come home to their favorite candy bar on a bad day.

And if you have to guess someone's favorite candy bar, the answer is never Tootsie Rolls.

More stories from Bonnie Joy Sludikoff and writers in Confessions and other communities.