Songs About Iron and Steel

Harry Belafonte, Blondie, Bob Marley and more in this musical tribute to the steel industry 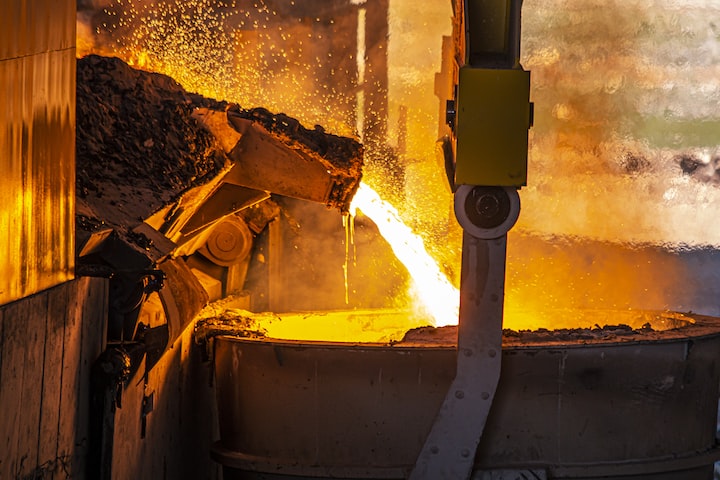 Photo by yasin hm on Unsplash

There is a Youtube Playlist of the songs listed here embedded at the end of the article.

Iron is the most abundant element by mass in the Earth’s crust, just ahead of oxygen. Not surprisingly then, it has been used as an industrial metal since ancient times. But pure iron is a soft metal ... in practice, it is almost always mixed with carbon to produce steel.

Although knife-like implements date back at least 2.5 million years, it wasn’t until the bronze age that knives were forged from metal, and mass production of swords to equip armies started in the 13th century BC. Tenpole Tudor sing this weapon’s praises and begin our playlist with Swords of a Thousand Men: “Hoorah, Hoorah, Hoorah, Yea!”

Bronze horseshoes have been dated from 400BC and the first ones incorporating iron date from ancient Rome. It was apparently when a blacksmith became archbishop of Canterbury in the 10th century that they acquired cultural significance as talismans of good luck. Caracol’s Horseshoe Woman personifies that.

Steel production was commercialised with the invention of the Bessemer process in the 1850s and further developed with the open-hearth furnace in the 1860s – leading directly to the second industrial revolution. The development of steel rails spurred the growth of the modern railroad; in those early days, track was laid by hand and the prowess of steel-driving men such as John Henry was celebrated in song. Several versions of this classic were suggested. I liked the one by Harry Belafonte.

The romance of the rail had locomotives fondly called “iron horses” and singers such as Arlo Guthrie have eulogised rail in song: “The sons of Pullman porters and the sons of engineers ride their fathers’ magic carpets made of steel” is from Guthrie’s City of New Orleans.

Modern steel production also brought the production of modern guns. A band appropriately called the Steeldrivers ask whether this weapon really deserves its sobriquet of Peacemaker. Sung from the point of view of the gun, it laments that “I coulda’ been a hammer or a railroad spike. I coulda’ been a train rollin’ through the night.” But until the “lion lays down with the lamb, I’m a cool 3 pounds of cold blue steel. I shoot even deader than the way I feel.”

Indeed, as long as there are those like Blondie’s gang plotting the heist of an armoured car (“25 tons of hardened steel”), guns remain a necessity to keep the peace. The Hardest Part of their plan is figuring out how to get to the “big man of steel behind the steering wheel”.

The skyscraper was another revolution propelled by modern steel production. In New York, the men of the high steel were a special breed. In Steel Monkey, Jethro Tull sings the praises of these fearless men.

With the advent of the second world war, men went off to fight and women were needed to work in the factories, building ships and planes. They were celebrated in song and film as the iconic Rosie the Riveter. The Four Vagabonds sing this tribute to the feminist icon.

After the war, a Swiss engineer revolutionised the production process. Instead of blowing air through pig iron to create steel, he blew pure oxygen. This simple change reduced capital costs and smelting time, increasing labour productivity by a factor of 1,000. And the industrial prowess of Asia grew as China rose from insignificant player to producing over half of all the steel made today. So even as worldwide production tripled in the last 50 years, these changes led to a drastic decline in the west. In the following decades, there were dozens of songs written on the subject, often referencing the staggering decline in employment rates in the industry – and plenty were nominated. They include Big Country’s Steeltown, Mischief Brew’s Jobs in Steeltown and Bruce Springsteen’s history of Youngstown, Ohio, one of the towns hardest hit by the steel employment crisis.

The most disturbing song about this era is undoubtedly Pete Atkin’s story of a skilled machinist who, discarded after 40 years, maintains his dignity: “The hands on his chest flared more brightly than his name for a Technicolor second as he rolled into the flame.” Suicide by blast furnace. The Carnations on the Roof are the flowers on the roof of the car that leads his funeral procession.

But rather than end on such a downer, let’s note that iron and steel have been and remain symbols of toughness and strength in popular lore. The iron man triathlon ; the man of steel; Iron Man. We close with an upbeat reggae number from Bob Marley, who is on the run but vows to be tough as Iron like a Lion in Zion.

Here is the B List - additional songs I liked but which didn't fit into the main article. Youtube Playlist follows.

1. Iron Bar Dub - Linton Kwesi Johnson - great song by a great blues artist. And while prison bars are indeed made of iron, it didn't really fit my narrative.

2. Steeltown - Tasmin Archer - almost made the A List but opted for Mischief Brew. It was a toss up.

3. Steel River - Chris Rea - almost made the A List but didn't think the lyrics were specific enough about a steeltown down on its luck.

4. Big Iron - Marty Robbins - also thought about A listing this but opted for Peacemaker which had more intriguing lyrics and was more varied musically.

5. Wheels of Steel - Saxon - it's about cars which I could have used instead of railroads, but railroads fit better and I liked the two railroad songs better.

6. Ironmasters - Men They Couldn't Hang - really liked the song but it's about an historic protest against toll gates and the steel mill in the town fits in only tangentially.

7. North Country Blues - Bob Dylan - great song. Could have used this instead of the Springsteen but opted for the Boss.

8. Rusty Cage - Johnny Cash - great song but did not include prisons as part of the narrative.

9. Iron Bound/Fancy Poultry - Suzanne Vega - lovely song but it's about a steel fence - not topical enough for the A List.

10. Bridge Came Tumbling Down - Stomping Tom Connors - tugged at my Canadian heartstrings but opted for something about building up instead of tumbling down - namely the Jethro Tull song. Besides there was enough woe in the songs about steeltowns.

11. Hard Workin' Man - Captain Beefheart - really liked the song. Liked the sound effects and the Bo Diddley rhythm. But didn't quite work for me in the narrative.

12. Five Long Years - Buddy Guy - great blues number but more about his relationship with his missus than about the steel industry.

13. Crosscut Saw - Albert King - again in the B List because like the Buddy Guy, this is a terrific blues number. But saws didn't fit my narrative.

14. Cleveland Iron Song - Jez Lowe - nice song but didn't quite fit the A List for me.

15. Iron Man - Black Sabbath - thought about including it because it is so iconic. Would have been the last song on the A List. But I wanted something lively and upbeat and this did not fit.

16. Iron Man - The Cardigans - Wow! Loved this cover of Iron Man better than the Black Sabbath original. But not upbeat enough for a closer. I really liked the Bob Marley.

17. You Can't Weld a Body - Karine Polwart - lovely song about shipbuilding and its dangers. Opted for Rosie the Riveter.

Other Links of Interest

This article was previously published at The Guardian. The topical song feature (called Readers Recommend) was discontinued at The Guardian in 2018 and can now be found at the Song Bar where every Thursday a new topic is listed. Join in and suggest songs on the topic and a volunteer from the community listens to all the nominations and puts together a playlist. Here are previous topical playlists I have posted at Vocal.

More stories from Marco den Ouden and writers in Beat and other communities.