The Creative Renewal of the Steel Industry 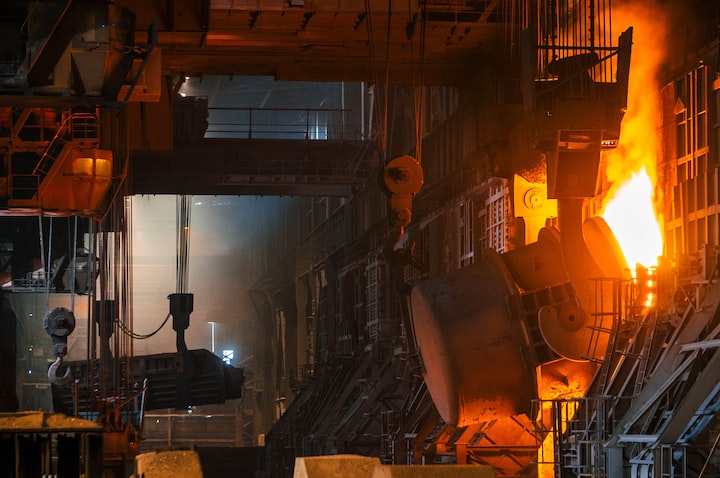 Photo by Ant Rozetsky on Unsplash

Recently I published a piece here on Songs About Iron and Steel, originally published at The Guardian. It was part of a weekly game called Readers Recommend. The blog posts a topic every Thursday and readers recommend songs that are about that topic. A volunteer "guru" listens to the nominations and compiles a playlist, writing a column to thread the songs together.

As usual, I did not know most of the 300 songs nominated. And I was surprised that there were quite a few of them lamenting the decline of the steel industry in the UK and the USA. One of them was Bruce Springsteen's Youngstown.

Youngstown, located halfway between Cleveland and Pittsburgh, became a thriving steeltown in the late 19th Century. It grew by leaps and bounds as steel became an ever more important industrial metal. Its population peaked in 1950 at 168,330. No wonder the Boss sang the praises of industrialism early in the song. "Taconite, coke and limestone fed my children and made my pay. Them smokestacks reachin' like the arms of god into a beautiful sky of soot and clay."

Then the decline began, accelerating into the 1970s and beyond. The steel industry in Britain and the United States was decimated. How severe were the job losses? Employment dropped from 197,000 in 1974 in the U.K. to 29,000 by the year 2000. In the same period, American employment in the steel industry dropped from 521,000 to 151,000. By 2010 the population of Youngstown had declined to 66,982, a phenomenal drop of 60.2 percent. Casting about for a villain to blame, Springsteen laments that "them big boys did what Hitler couldn't do". That old villain, the American businessman. The tycoons of the steel industry. The modern day descendants of Andrew Carnegie foisted destruction on an industry.

But the story is more complex than this simple blame game would have you believe. With ten or so songs about declining steeltowns, I decided to look into the history of the steel industry. What I discovered is nothing short of astounding.

Pure iron is too soft for industrial use. Steel is an alloy made up of iron and other minerals, primarily carbon. The manufacture of steel was commercialized in the 1850s with the development of the Bessemer process. This process removes impurities from molten iron ore by blowing air through it. The impurities oxidize and are separated as slag. Carbon and other alloying agents are then added. The industry was advanced even further by the invention of the open hearth furnace in the 1860s. This led to what has been called the Second Industrial Revolution. Industrial use of steel boomed. It made the modern railroad possible, as well as the eventual development of steel-girdered skyscrapers.

The steel industry played a huge role in the Second World War as women went to work in factories building ships and planes and tanks. These women were celebrated in song and film as the iconic Rosie the Riveter.

But shortly after the war, in 1948, a Swiss engineer named Robert Durrer successfully tested a new steel-making process that would revolutionize the industry - the oxygen furnace. The old blast furnaces blew air through molten pig iron to remove impurities. Durrer's simple innovation was to replace air with pure oxygen. It was commercialized in 1952-53 by the Austrian company VOEST and OAMG (now known as Voestalpine AG). As noted in Wikipedia, Durrer's process "reduced capital cost of the plants, time of smelting, and increased labor productivity. Between 1920 and 2000, labour requirements in the industry decreased by a factor of 1,000, from more than 3 worker-hours per tonne to just 0.003."

It takes ten to twelve hours to turn 400 tons of iron ore into steel with the old blast furnaces. It takes only forty minutes with the LD Converter (the modern oxygen furnace named after the towns of Linz and Donawitz in Austria).

Steel making is a capital intensive business and the cost of a blast furnace is high. So adoption of the new process was resisted in both Britain and the United States. The British Labour government took the industry out of the hands of greedy capitalists in 1967. Economic historian Alasdair Blair notes that this just exacerbated the industry's problems. Paraphrasing Blair, Wikipedia notes that "British Steel Corporation (BSC) had 'serious problems' including complacency with existing obsolescent plants (plants operating under capacity and thus at low efficiency); outdated technology; price controls that reduced marketing flexibility; soaring coal and oil costs; lack of capital investment funds; and increasing competition on the world market."

New plants, of course, were eager to use the new process and this was especially so in third world and developing economies. It wasn't until Margaret Thatcher re-privatised British Steel that it once again became competitive in the international marketplace. By 2000, 60 percent of steel plants used the LD Converter.

But while this combination of increased productivity from the LD Converter and international competition led to the severe declines in the British and American steel industries, the worldwide production of steel has not declined. Today worldwide production of steel has tripled since 1967. But China's production has grown from 2.8 percent to 50.3 percent in 2015. American production has declined from 115 million metric tonnes to 78.92, a drop of 31.4 percent. British production declined from 24.3 metric tonnes to 10.86, a drop of 55.3 percent. Wikipedia has a table of steel production by country that is too large to reproduce here, but please check it out. (Link at the of article. )

The story is significant because it highlights in bold relief the phenomenon that economist Joseph Schumpeter called creative destruction. Schumpeter's choice of words is unfortunate. Destruction has a strong negative connotation and while the revolution of the oxygen furnace did eliminate a lot of jobs, it enhanced the production of steel. It enabled the world to triple its output over fifty years. It enabled relatively poor countries to become active in steel production. Marginal producers in 1967 became major players by 2015. Countries like China, India, Brazil, Turkey and Mexico. It increased the world's overall wealth.

Capitalism rewards risk taking and innovation and it increases overall wealth in doing so. It is indeed unfortunate that sometimes innovation displaces some workers. The scale of the technological revolution in steel was nothing short of mind-boggling – a productivity increase of a factor of 1000. And one can certainly empathize with people affected by such a drastic change.

Nevertheless, such change means creative renewal, not destruction. Henry Ford's innovation of the automobile assembly line was a creative renewal of the personal transportation business. It put horse breeders and buggy makers out of business. Today the surge in alternative media through the Internet is a creative renewal of the journalism industry. Traditional media like newspapers and commercial television broadcasters have suffered as a result. But even as broadcasters are losing revenue, they are innovating as well. Video on demand is common now and it was an act of creative renewal that put Blockbusters out of business but may have put new spring in the broadcast industry's step.

Today there has been a few rumblings about the coming robotic age. Again a fear that workers will be displaced. But with every innovation, new opportunities arise. New jobs are created. The economy is renewed.

American unemployment since WWII has varied from two to ten percent. It has been declining steadily since 2010 (until Covid killed it – but employment has started to decline again and is almost back to 2020 levels.) The real median household income climbed steadily from 1985 to 1999 when it peaked. The over-extended markets leading to the market crash of 2001 and the debt crisis of 2008 kept the real median income down since then, but it has been climbing steadily since 2012. In 2015 it experienced its largest one year increase on record. It hit an alltime high in 2019.

Despite the gloom and doom mindset that sometimes accompanies tech change, especially when it directly affects you, overall, tech change, trade and a market economy work to increase overall wealth. Without it we would still be riding horse-drawn buggies and reading by kerosene lanterns. We'd still be splitting wood for fuel to heat our homes. Capitalism is a constant state of creative renewal. Thank goodness for that!

Note: This article was originally published in 2017 at the Foundation for Economic Education and on my blog, The Jolly Libertarian.

Marco is the published author of two books on investing in the stock market. Since retiring in 2014 after forty years in broadcast journalism, Marco has become an avid blogger on philosophy, travel,and music He also writes short stories.