Songs About Immigrants and Refugees

A collection of moving songs about people seeking a better life 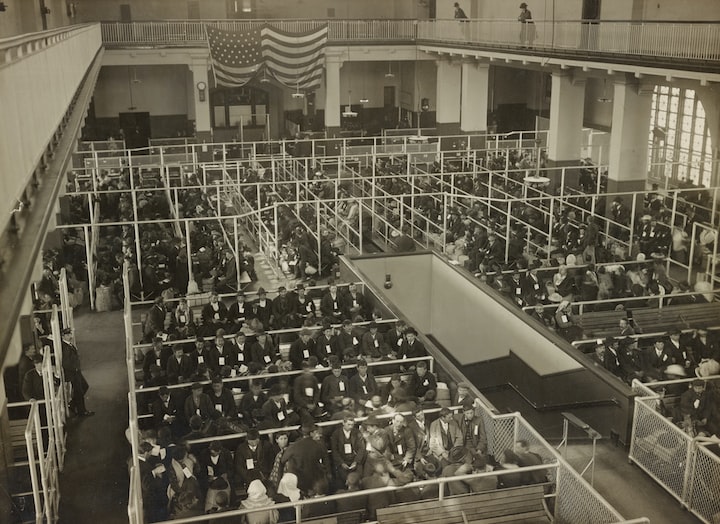 In another piece on songs about roots, I concluded with a number that disparaged the very concept of roots, a song about following your dreams and searching for freedom. "People have the ability to lay down their own roots, wherever and whenever they want," I noted. "Maybe part of growing up is not accepting the roots you came with but setting down your own roots in a place and with people of your own choosing."

Which brings us to the subject of migrants, immigrants and refugees. People have been on the move since time immemorial. They have been searching for more hospitable climates, better working opportunities and sadly, to escape slavery and tyranny - to find freedom.

Migrants typically look for work, often seasonal. In Cornwall, by 2007 there were no active metalliferous mines left. Show Of Hands tell the story of Cousin Jack and his fellow miners. "Where there's a mine or a hole in the ground," they sing, "That's where I'm heading for, that's where I'm bound."

Many emigrants from Europe fled to America, a beacon of hope and opportunity. Many faced great hardship in doing so. The port of entry for many was Ellis Island under the shadow of the Statue of Liberty. The all-girl group GIRSA sing of their grandfather, who along with 12 million others who passed through the centre, "were standing in lines just like cattle, poked and prodded and shoved". They were looking for freedom and opportunity. When they look in his Immigrant Eyes they see that day reflected. "Don't take it for granted," they sing. The video was filmed at Ellis Island, now an historical landmark.

Not all migrants move by choice. Slaves were brought from Africa and weren't free citizens until Abraham Lincoln issued the Emancipation Proclamation. Many freed blacks joined the US Cavalry's 10th Regiment to fight in the American Indian Wars. The natives called them Buffalo Soldiers. Bob Marley tells us some of them ended up in Jamaica.

The largest barrier to the free movement of people has always been and remains immigration law. Coco Tea laments a New Immigration Law "treating everyone like outlaw. They claim it's a terrorist law." So timely. Must be a new song, you ask? No. It came out in 1997 during the Clinton administration!

When the law won't let you go where you want, many go anyway, Illegally! Why do they do it, the Vargas Blues Band asks, "afraid of the police, work hard for small pay, live among the squalor and the hidden pain of indifference and hate."

Because there's work to be done and they're needed says Merle Haggard in The Immigrant. "So border patroller don't stop the stroller 'cause the illegal immigrant is helping America grow."

Al Stewart also recognises the value of immigrants to the economy. He tells the story of a Spanish immigrant named Sergio. He buys some land and builds a vineyard. "They're entered into competitions, winning medals, advertised on TV. They're calling him the patriarch today."

Indeed immigrants are among the most productive of Americans according to Thomas Stanley and William Danko in their best-selling book, The Millionaire Next Door. In a table entitled The Top Fifteen Economically Productive Small Population Groups they list 15 ethnic communities in America that have higher incomes than the average American, are less dependent on the state for support, and have a productivity double to six times the average American. Israelis top the list. In eighth place with triple the country's average productivity is … Syria! Egyptians are fourth, Iranians ninth and Palestinians 13th. The authors estimate that these groups have double or better the proportion of millionaires than all US households.

Indeed, The Wolfe Tones tell us that the Irish are still leaving for better futures. And it's those with brains, vision and education that are leaving. "Our best asset is our best export too" as they tell of the Flight of the Earls.

Yet prejudice against immigrants remains. In From the Fire to the Frying Pan, Sonic Boom 6 tell of the us-versus-them mentality that sneers, "See them coming over here to take what's yours, some of them are gonna start a holy war."

We close with the most tragic of people on the move - refugees. In her powerful Né So (Home), Malian singer songwriter Rokia Traoré tells us that there were 5,500,000 people forced to flee their homes in 2014. The video that tells this story is heartbreaking.

Chip Taylor tells of Refugee Children he met in Sweden.

And Crowded House tells of the boat people fleeing tyranny in Africa. In a spoken introduction actor Benedict Cumberbatch tells us "Nobody puts children in a boat unless the water is safer than the land." The song is interspersed with short clips from actual refugees. One young person asks, "Where's the humanity?" Help is Coming, the song assures them. You have to watch this video to understand the desperation that compels someone to become a refugee.

Now wipe your eyes because hope still exists. The west is still a beacon. The Statue of Liberty is still a "a mighty woman with a torch, whose flame is the imprisoned lightning, and her name Mother of Exiles. From her beacon-hand glows worldwide welcome." In spite of efforts to subvert this proud tradition.

"Go West where the skies are blue. Life is peaceful there," sing the Pet Shop Boys in an upbeat cover of the Village People. Go west indeed!

This article was previously published at The Song Bar where you'll also find an additional 19 song B List. Here are previous topical playlists I have posted at Vocal.

More stories from Marco den Ouden and writers in Beat and other communities.