The Top 5 Differences Between America and Japan

by BK Johnsen 6 months ago in culture
Report Story

According to some guy living in Japan 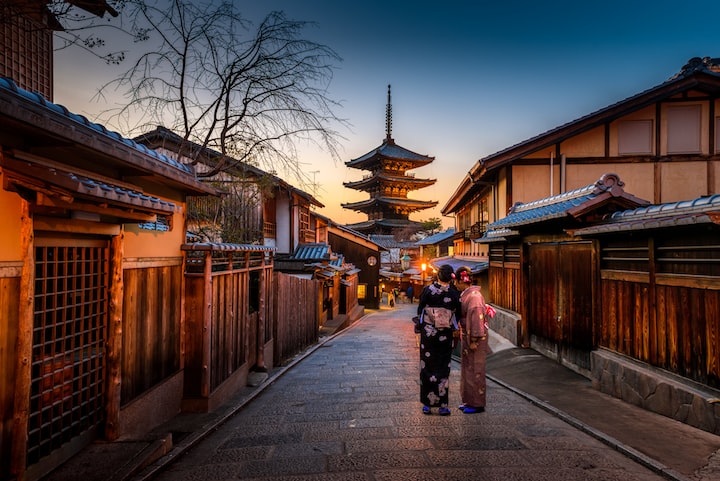 Photo by Sorasak on Unsplash

"And now for something completely different…"

When I write, I often try to make it a quest for meaning and purpose. To find and embody an amateur philosophizer, and then share some of his insights with the world, so we can all have deeper and more meaningful moments every breath we take! To bring some levity and joy into your hum-drum lives!

But not this time. No ma'am; Ain't gonna happen. Today, I wanna try something completely different, because life is too short to stay professional and coherent at all times.

"Be who you are and say what you feel, because those who mind don't matter and those who matter don't mind."

I was born and raised near Seattle Washington and lived there for over 30 years of my life. But one day, I fell hopelessly in love with a woman who inadvertently made me chase her all the way to Japan: the land flowing with sake and sushi.

So now that I've been happily married to a beautiful Japanese woman for 14+ years, and have lived in Japan for almost half that time, I feel like sharing some of the differences I've noticed between America and the land of the rising Nippons. Let's do this thing!

(Please remember, the following is completely based on my own observations and experiences. Be sure to consult your doctor and ask about Viagra before believing anything about Japan from one person's life experiences.)

I immediately regret my decision to put this first on my list. There are tons of things I could say about Japanese schools versus American schools. Listicles are supposed to be short, right? Ugh… I'll just have to do my best and make this as short as possible.

Why no janitors? Because the students are the janitors. After every lunch, all the students are assigned tasks to clean the school. The teacher's job is to make sure they stay on task and keep rotating the students so they don't have to do the same job every day with the same people.

After I witnessed this daily Cleanathon done in person, it finally made sense why every Japanese person I've met in my life is much tidier than I am… Wipe on, wipe off, wipe on, wipe off. Banzai Daniel-san! Banzai!

Every school I've been to requires a uniform for all students. There are some private schools that do not require them, but overall, it's across the board: they love their uniforms here.

Personally, I think this is a good thing. There are actual studies that don't have anything to do with fetishes, showing that school uniforms increase student achievement and discipline.

1c. Few to No School Buses

There are very few school buses in Japan. Public transportation is much more streamlined, safe, and functional here. This was very cool to witness in Japan since I've always despised riding the bus in America.

Japan is tiny. Because there's a severe scarcity of space, various cultural differences have emerged, like Love Hotels. In love hotels, you rent a room by the hour rather than a night. It can be nigh impossible to find a quiet, private location to "get it on", so you're now likely to find at least one love hotel in almost every Japanese city.

There are also space-restrictive places called Capsule Hotels, as seen in the photo above. These things always make me wonder how many Japanese people are claustrophobic per capita…

For one last space-related difference in Japanese culture: It is far more typical for children to remain at home with their parents throughout adulthood. Making yet another argument in favor of Japanese Love Hotels being spread out all over Japan…

This also might have to do with Japan's lack of space, but I've yet to visit a household in Japan with a drying machine. They all hang their clothes out to dry.

Is it just me that thinks this is different? Because I've never met a fellow American in the USA who frequently hangs the majority of their laundry out to dry. But maybe I've just outed myself as a middle-class snob… Please let me know, my fellow Americans! Do you own a drying machine or hang your clothes out to dry?

This is another topic that deserves its own non-listicle blogpost… Nevertheless, I will do my best to keep it brief. Are we still dreaming? Or am I making yet another list within a listicle?

From what I've heard, DVRs are typically not included with your cable TV package here in Japan. However, most TVs here do have DVR capabilities built-in, so all you have to do is buy and install your own external hard drive and you are good to go.

While this can be quite nice for PC geeks like myself, I've met many elderly folk in Japan who just don't want to be bothered with figuring out these newer technologies.

First off, there are no such things as sitcoms here. In Japan, every situational show is called a "drama", even comedic ones. Also, most of these shows will only run for one season with an average of 13 episodes. So you will likely never see something like Seinfeld or How I Met Your Mother debuting in Japan.

Another interesting thing about comedy in Japan is that the most popular form is duo sketch comedy called "manzai." It is very much like watching a modern Abbott and Costello, but on Japanese crack.

They do have solo stand-up artists which they call "pin", but in general the Japanese public seems to prefer their Manzai troupes over their solo Pin acts.

According to a quick internet search, Cicadas are large homopterous insects with long transparent wings. In some American states, they come out in droves every 7+ years or so. But where I'm from(Seattle), I had never heard tell of such creatures.

In Japan, they come out of hibernation every summer and their mating calls are loud and constant. If you watch Anime, you may have heard them before. In fact, the first anime I ever watched, Neon Genesis Evangelion, was how I was introduced to the sexy mating call of the male cicada.

Conclusion - Is It Over Yet?

"The secret of a good sermon is to have a good beginning and a good ending, then having the two as close together as possible."

Wow, this post was a lot longer than I hoped it would be, but it was some good practice for my future listicle adventures!

There are actually about 10 more things I wanted to include in this list, but my wife has informed me that it's way past my bedtime and that I have done enough damage to Japan/US relations for one night, so I'll have to keep this list at five for now.

If you want to know more details or have questions about anything Japan(from a guy who doesn't know that much about Japan but lives there) let me know in the comments or send me a DM! (I dunno if those things are even possible on here, but its usually what people say)

I also would like to take this moment to congratulate everyone who stuck it out 'til the end. Your patience is much appreciated.

Lastly, writing this post on an impulse has inspired me to make a new Medium publication called Listicles & Laughs. I think everyone deserves a space to be a little loosey-goosey with their professionalism and coherency every now and then. So why not make a publication for it?

Author of 𝐵𝑒𝑓𝑜𝑟𝑒 𝑌𝑜𝑢 𝐹𝑎𝑙𝑙 & 𝘓𝘢𝘥𝘺 𝘰𝘧 𝘵𝘩𝘦 𝘜𝘯𝘥𝘦𝘳𝘸𝘰𝘳𝘭𝘥, streamer, podcaster, entrepreneur, karaoke-enthusiast, & Jedi. Born in Seattle, I now live in Japan with my wife, working on keeping my own Pride in check.

More stories from BK Johnsen and writers in Wander and other communities.