Anacondas and Caimans, Oh My!

by Nancy McLay 5 months ago in south america

I discovered Peru, Machu Picchu and ... myself! 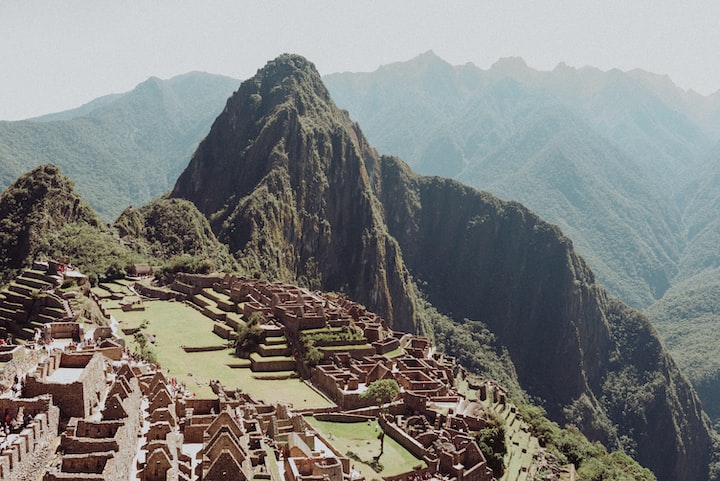 Photo by Persnickety Prints on Unsplash

Snapping awake in the wee hours of the night I shot out of bed. An overwhelming impulse began surging over me, summoning me to Machu Picchu in Peru. My beloved mother had recently passed away and my marriage had crumpled shortly thereafter. I had never been so compelled to go anywhere before. Perhaps I just wanted to run away to the farthest reaches my subconscious could fathom, to escape my life at the time. Sleep eluded me for the rest of the night. At the first respectable hour I contacted Chris, my travel agent.

Privy to what I had been going through, Chris thought I was suffering a psychotic episode. In a fatherly manner, he tried to talk me out of taking this journey. I was not to be dissuaded. Chris finally relented, “You can only go if you join a reputable tour group there.” I consented and he made the arrangements.

In the airport boarding lounge there was only myself and one man. Filled with curiosity, he engaged me in conversation. He resided in Peru but had been working in Canada. Pointedly expressing his concern regarding me travelling alone to Lima, he explained how dangerous the city was. He relaxed somewhat after discovering I would be joining a tour group. Forewarning me that I would be swarmed with taxicab drivers seeking fares in the airport, he handed me a small slip of paper, simultaneously stating matter of fact like, “You must only get into a taxicab from this company. You will recognize the driver. He will be wearing the best suit with his photo identification visible on it.” Was this man one of my guardian angels? I wonder this now.

Arriving at Lima’s airport, I was mobbed by eager, male, taxicab drivers. One woman in the sea of men, apparently acting as the liaison between the passengers and the drivers asked me if I needed a cab. I cited the taxicab company that the man in Edmonton had named. She nodded and motioned to a man standing farther back in the mob. As he stepped forward I noticed he was very well groomed and dressed in a lovely, black suit. His photo identification prominently displayed on his suit jacket breast pocket confirmed to me he was the one. He commandeered my luggage and we stepped out into the dark, rainy night.

The driver directed me to his car and held open its door for me as I nervously climbed into the back seat. I didn’t understand as he began speaking to me, not in English. I passed him my travel document showing my hotel destination. I believe he could feel my tension, as he tried to converse with me in a reassuring tone of voice as he drove.

Suddenly the car stopped unexpectedly. Through the car windows I could see we were in a seedy neighborhood. I was positive I was going to be killed then, and my body dumped there! The driver exited the car and I sat in anticipation of being dragged out of it by my hair and meeting my demise! He went into a building, possibly a house. I remained seated, shaking with fear. I briefly considered making a break for it, but decided running through a strange, dangerous city in the middle of the night would be unwise.

The driver reappeared and immediately sensed how fearful I had become. He rummaged about in his suit, for a gun I thought! He produced a city map. He tried to show me where we were in relation to the hotel I was registered at. I calmed down then and realized I was not going to be murdered by him!

When the car stopped again, the driver pointed excitedly to the sign identifying the hotel. He motioned that I should exit the car. He carried my luggage to the hotel’s check in desk and verified my reservation. When I tipped him he surreptitiously sighed in relief.

My sleep was restful. I woke up feeling elated. I was actually in Peru and still alive and well. I sought out the tour group and discovered upon speaking to the hotel’s front desk staff that I had an entire day to spend alone before the rest of the group would arrive early that evening. The receptionist suggested I walk a short distance to the shopping and public beach area on the coastline of the ocean. Taking her advice I enjoyed the day exploring this area of Lima.

The tour group I met that evening was comprised of a young girl from England, a family of three from South Africa, six Americans and a representative from the tour company. The wife of the South African couple was a holistic medicine practitioner. Two of the Americans were teachers, another was a medical doctor and one was a neurosurgeon. I thought it was a very eclectic group. After the initial meet and greet the South Africans and I decided to go exploring together. The hotel staff arranged our taxicab transportation.

In the morning the group started our long road trip to Machu Picchu. In the first leg of the journey we travelled over one thousand kilometers from Lima to Cusco, known as the entry city to Machu Picchu. Cusco being high above sea level in comparison to Lima would make us prone to altitude sickness. We would have to get used to high altitudes before arriving at Machu Picchu our guide told us. We stayed at Cusco for a couple of days to ward off any possibility of altitude sickness. While there the locals introduced us to Coca tea, a wonderful, hot beverage made from the raw material used to manufacture cocaine. I drank the tea often and this remedy apparently worked. I did not suffer any altitude sickness.

From Cusco, we drove on the Inca Trail through the Sacred Valley toward Machu Picchu enjoying recordings of pan flute music. Stopping at various old, Incan ruins along the way, the guide encouraged us to climb them. Watching us with hawkish intent while we climbed, he later explained the ruin climbing served as boot camp to ensure our success on our climb up to Machu Picchu. We continued our drive to Ollantaytambo, boarding a train there to Aguas Calientes, the town at the base of Machu Picchu.

Upon awaking the power was out in the town. We got ready to go and collected our belongings in the dark and chill of our hotel, by candlelight, enhancing the overall excitement and adventure I was feeling. Clamoring aboard a bus we started the climb up the mountain. The bus stopped when Machu Picchu was still far up the mountain. I then understood why boot camp was so important. It was hard to breathe now, due to the high altitude. We started our ascent up the mountain on foot, huffing and puffing and struggling to catch our breaths.

Suddenly our guide announced we were there! Like fish out of water we flopped on the ground gasping for air. Pulling myself up on my hands and knees, not having the energy to stand up, I peeked over the edge. Wow! There lie Machu Picchu. It was the most breathtaking sight I have ever seen, no pun intended!

The sun was just rising, its golden light slowly spreading across the site of Machu Picchu. The rocks glimmered beautifully from the dawning day’s rays. Truly Glorious! So overwhelmed by what I was seeing, I actually yelled out loud! The yelling was liberating. My recent problems at home seemed minute in comparison to the spectacle before me.

After regaining our breath somewhat, we made our way into the ruins of Machu Picchu. Silently, and deeply involved in our own senses we explored this mysterious place. I paused to place my hand on one of the rocks. It was warm and pulsing, seemingly with a heartbeat of its own. As I wandered around the ruins vivid pictures flashed through my mind of what life there was like. Llamas, still roaming the site, clearly would have been an important part of life here. The altar where sacrifices were purported to be carried out appeared still faintly stained with blood; human or animal, it was unknown. It was very quiet and serene there, but the energy was palpable.

When it was time to leave, we hiked back down the mountain, introspective and silent, to board the bus again. The bus wound back down the mountain to Aguas Calientes. We disembarked the bus and all just stood there looking at each other for a moment. One member of the group suggested we find a bar for a drink but other than that no one spoke. Once we had beverages in our hands, someone ventured, “So, what do you think”? I kid you not when I tell you now that everyone responded at the same moment, “Aliens!” The huge stones on that very high mountaintop used to make the site are not indigenous to that mountain top. I found it very ironic that my eclectic, highly educated associates all concluded the same about Machu Picchu’s origin.

After viewing Machu Picchu the group split up. My adventure continued as I then went on to spend a week in the Amazon jungle. My accommodations there were a tiny, grass hut with no electricity. When I left my hut I saw strange animals that made even stranger sounds. My meager meals served in banana leaves made home appealing again.

I was taken on jungle hikes to learn about plants used for medicine and plants that create colors in commercial cosmetics. On one hike in particular, we were instructed to pick up our lunch from the kitchen to take with us. We were concerned and feeling disadvantaged when lunch proved to be merely a small package of soda crackers.

We hiked for a good while. Coming to a swampy area just off of where the Amazon River flowed, our guide suddenly started shouting hysterically, “Anaconda, Anaconda!” I looked and saw the biggest, blackest snake ever! It was massive, the stuff of nightmares! Then even more hysterically the guide started shouting again. Jumping up and down and pointing frantically he managed to get out, “White Caiman!” Then with lightning speed the Anaconda sprang at the Caiman. A fierce fight ensued between the two. The water churned as the unbelievable battle took place before our wide eyes. The Anaconda wrapped itself around the Caiman and smothered it to death. It would be a long time before it would swallow the entire Caiman. The excitement over, the guide regained his composure and shared with us that we had witnessed a very rare occurrence. He then gleefully announced, “Lunch time” and ushered us into a small boat.

He paddled the boat out to a large square raft with railings, in the middle of the marshy area we were in. He assisted us onto the raft. He instructed us to squeeze our precious package of soda crackers to break them up and then open the package and dump it over the edge of the raft into the water. We were very reluctant and almost angry about doing so. We were so hungry by this time. As the soda crackers hit the water, the water suddenly teemed with piranhas. They started jumping straight up out of the water to catch the soda cracker pieces as they were falling. We could clearly see their razor sharp teeth!

Anacondas and Caimans, “Oh my!” Now Piranhas! This trip was indeed my best adventure yet! I came home renewed, confident in my abilities and looking forward to my next adventure.

I enjoy writing. I am an ESL tutor and I am currently taking college courses to obtain a degree in digital marketing and social media management.

See all posts by Nancy McLay →