GE
by Gracie Evans 4 months ago in culture 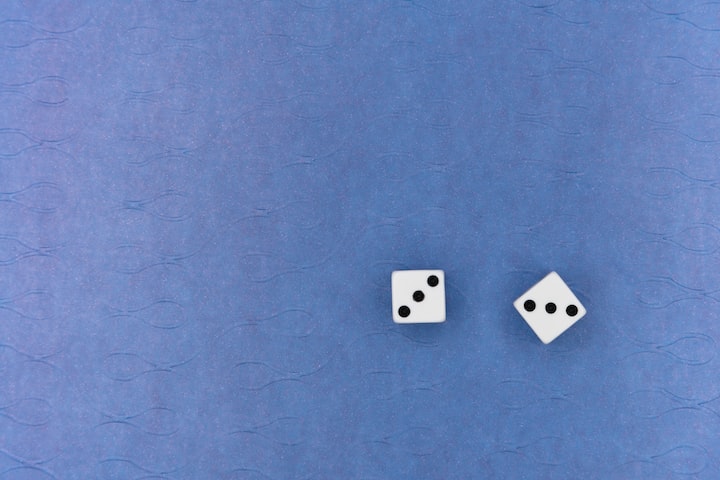 The cool of Charlotte’s impending winter was shut out with the slam of my door. I fumbled over boxes as I made my way to the kitchen island to place my groceries. It wasn’t much but would last until payday, not sure how long my body could run on pasta and minute steaks, but I was going to find out the hard way. North Carolina’s recession recovery was great in theory, but it left a lot of experienced and educated people looking for the same jobs as me, leaving me working a 9 to 5 selling stationary and my marketing degree collecting dust. Luckily, I found a house for sale due to foreclosure, it was cheaper than renting and I didn’t have to share a wall with what could only be described as the longest ongoing domestic dispute of all time. I was just about settled into my recliner when the sound of the doorbell interrupted me. I lazily scuffled to the door and all that was there was an envelope almost bursting at the seam due to the thickness of its contents. I caught a glimpse of the delivery driver’s speeding van almost collide with a beat-up Jetta before I went back inside. The package read a familiar name, “Raymond Isaac.” “Poor guy” I thought as I threw it on the pile with the rest of his mail. Nobody deserves for their house to be repossessed, and judging by the condition of his house, he seemed like a good guy. He had an affinity for punching living room walls, but his subpar DIY spackle jobs almost made up for it. That was his ninth piece of mail this week, I assumed he didn’t have the heart to tell anyone of his predicament. I turned my TV on, and the sound of dribbling and broadcasting filled the room. Basketball was never my thing despite being from North Carolina. To be honest I’m not sure why it’s a North Carolina thing, our own team is abysmal and that’s putting it lightly, but I guess enough superstars have called North Carolina home to give people an obsession with the sport.

I placed my head back and let out a deep sigh. Life was so bland; I missed the days in college where I was broke and drunk, now I’m broke and tired. My self deprecation was interrupted by a thump. The manilla envelope gave way and out came a black blook. I couldn’t deny I was curious to know about Raymond. The urge to open his mail was there but it just felt so wrong, mail opening itself however rendered me guilt free and intrigued. The leather was cold to touch and the bookmark ribbon flowed freely. I opened the cover and written on the flyleaf was a message “Sorry ‘bout last season Ray, this outta get me back in your good graces – Ritchy.” I flipped the page, in capital letters it said “October 25, Blazers VS Warriors, Blazer W 107-101, O statistical anomalies” the rest of the page was filled with similar writings, that coincidentally seemed to match the NBA’s schedule for this season. I shrugged off the book and threw it on the coffee table. I laughed to myself that I felt bad for Raymond when he apparently had been putting faith into some sort of a pseudo-psychic bookie. I continued with my evening when I heard the final buzzer of the game on my TV and looked up to check the score, as if I cared, and on the stat line were familiar numbers, 107-101 Blazers win over the Warriors. I felt the colour drain in my face and a rush of adrenaline shoot through my body. I picked up the book and compared the predictions on paper to the scores on TV. They were all matches. Not one score was off, and it even managed to predict a certain player’s 50 point game. I slowly sank to the ground and sat there with my jaw on the floor for what seemed like hours. The realization flushed over me, but my brain wouldn’t allow me to comprehend it, Raymond had a psychic bookie.

The next day dragged on, my mind was preoccupied with everything that unfolded last night. I peaked my head out from my cubicle and made sure no one was looking; I had been resisting the urge to place a bet all day but finally succumbed to my own pressure. Fifty bucks wouldn’t hurt and if it turns out the black book was a fluke at least I would know, and it would stop eating away at me. I grabbed the book from my bag and opened it to page two, all morning I had gone back and forth about bringing it to work but I felt if it wasn’t in my sight it would disappear. I went to the top searched betting site and filled my slip with all of the books predictions, even the outlandish one that suggested a record crushing game for a bench player. I placed my bets and a sinking feeling came over me. I wasn’t an irrational person, I felt so idiotic that I had bought into this nonsense. I threw the book in my desk and violently slammed the drawer shut in frustration. A loud silence overcame my section of cubicles, clicks of keyboards ceased and phone conversations went mute. For a guy who didn’t want anyone to find out about his inane obsession with a magic book I sure had a way of making a spectacle of my inane obsession with a magic book. Luckily for me, pen sales quotas trumped the crazy co-worker, and everyone went about their day and continued with their clicks and conversations.

I got home after work and went straight to bed. I laid there for hours but couldn’t sleep. I was petrified at the thought the cleaners at my office would somehow find Raymond’s book and throw it out. I rolled over to grab my phone, 4:07 am. 48 hours ago my first thought would’ve been “shit I work in 5 hours” but a lot had changed since then and the only thing coming to mind was “all the games are done for the night.” I jumped out of bed, I had to know once and for all that the book was garbage. I logged onto my laptop and everything became a blur. My betting account had an $1100 deposit. All my bets won. Every one of them. Ritchy was right, down to the score, the stats, the everything. My whole body began shaking and a cold sweat came over me. I grabbed my keys and ran out of the door. I needed the book in my hands. Charlotte was dead quiet at this hour. Had my heart not been beating out of my chest I would’ve appreciated the silence. I entered my security pin and scurried to my desk; the black book was there. I was overcome with emotion and sat in my cheap office chair to take it all in.

Work became tolerable for me when I knew I didn’t have to be there anymore. My coworkers stopped being sale-hungry robots and became people I felt pity for. I wanted to quit but had to pay a couple dues before I pulled the trigger. I woke up happy and went to bed excited everyday, that hadn’t happened since elementary school. Almost every cent I made from bets I parlayed back to bet more. The book didn’t miss. By the end of the second month, I had racked up a little over two hundred thousand. I wanted to splurge but I had to be smart, the book wasn’t infinite it only lasted for a season. But if I played my cards right, I could end up with millions.

The halfway mark for the season had come and gone, I quit my job once it was evident to me that there was no losing with the black book. I spent my mornings placing bets, betting everything I had for the exception of some allowance and funds for necessities. I spent my evenings in the city at sports bars watching my bets unfold in the company of clueless friends. Feigning disappointment, excitement, and shock for every incident as if I didn’t already know the outcome. My frugality slipped into frivolousness and I didn’t care. I thought about when the season ended and my last bet cashed out, how I would tell my parents I made some smart investments and was set for life, how I could brag to my older brother who always looked down on me for not selling my soul to work for Bank of America like him.

May 19th came, which meant it was deep into playoffs, nothing special was slated in the book this day, like always I placed my bets in the morning and spent the day hanging out in the city trying new things. I was excited to go to the bars tonight, Charlotte’s team was playing a game 7 and were about to lose. I’m not a cynical person but watching a bunch of grown adults throw fits that one group of overpaid and egotistical athletes beat their favourite group of overpaid and egotistical athletes filled me with more joy than the book. Frankly, they should just be grateful our team made it this far, I almost didn’t believe the book when I read it, but I didn’t lose my faith. The fourth quarter was coming to a close and Charlotte was down by 2. Everything was going to plan. I looked down at my phone as the final buzzer sounded but instead of screams and cries, I hear cheers. I glanced at screen and my heart stopped. Charlotte hit a three at the buzzer. I had lost everything. 17 million dollars and not a penny saved. I didn’t pay my mortgage, my car, nothing. Every penny I earned was parlayed to get maximum returns. My shock was mistaken for joy as were my tears. People danced and cheered around me and I sat there frozen.

I don’t remember how I got home, all I knew was I was blinded by rage. I paced around my living room in a panic and before I knew it my fist was in the wall. I hit it again and again until my bloodied fist was raw with pain. I needed a distraction anyway. I stayed up for the next three days, calculating algorithms, making spreadsheets. Doing whatever I could to imitate the black book’s results. The Charlotte win forced the book of course and it had been wrong ever since. My obsession consumed me. It was two months later when I got the letter from the Bank of America. It was a long letter but all it needed to say was “foreclosure.” I had skipped the past 6 payments so I could bet more, and it all was coming back to haunt me. I sat on my recliner and stared at the four holes in the wall. A cloud of shame came over me. I needed those holes to be gone, they were a reminder of the night I lost everything. I went into my basement storage room where I found a half empty can of spackle and paint. I repaired what I broke, it wasn’t pretty, but the holes were gone. I sat in my recliner and accepted defeat.

Months passed and October came, I left my parent’s basement suite and borrowed my brother’s old Corolla from high school and puttered down the familiar street. The feeling of cold sweat and adrenaline flowed through me, it had been months since I had that feeling. I shifted into park and looked up in time to see the delivery driver speed off and a man come out and pick the manila envelope up from his doorstep and slip back inside. I sat back and smiled. “Poor guy” I thought.