by Sean Patrick 5 months ago in fighting

It looked good in the moment, but Brock crushing Rey wasn't as great as we think.

As a surface level idea, having Rey Mysterio get beat up by the biggest star in the company isn’t a bad idea. However, the execution Brock Lesnar’s beatdown of Rey Mysterio left a lot to be desired. On a night when the former World Heavyweight Champion Mysterio was set to challenge for his first World Championship in nearly a decade against Seth Rollins, his promo was interrupted by Brock Lesnar and his advocate, Paul Heyman.

Here are five reasons why this beatdown angle wasn’t as great as you may have thought. 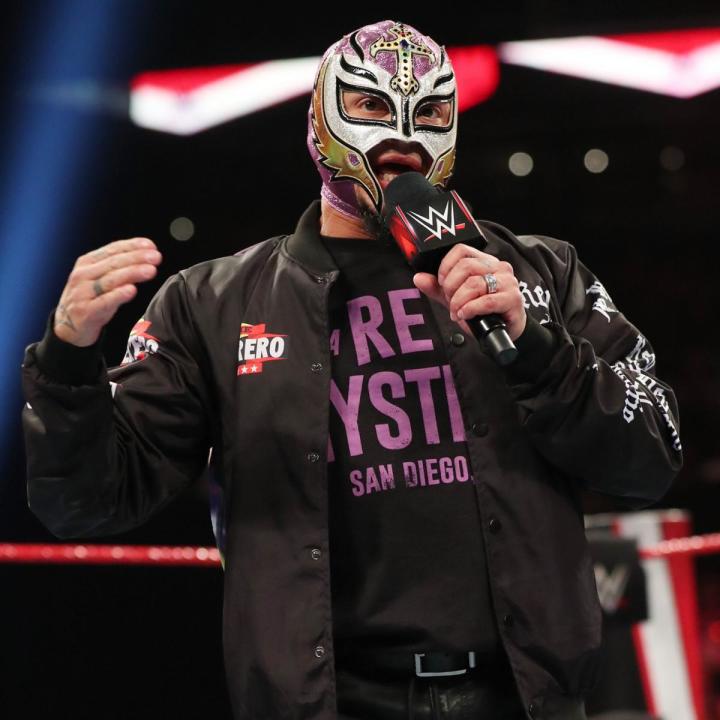 When Rey Mysterio grabbed the microphone away from Paul Heyman, Brock Lesnar lost his cool and attacked Rey, felling the the much smaller competitor with two F5s. Brock then turned his attention to Rey’s 19-year-old son, Dominic, who was in the crowd. Dominic attempted to back down from the much bigger man, but Brock grabbed the young man anyway and slammed him to the floor before slamming him into a hard plastic ring post and then into the ring where young Dominic impressively handled a pair of German Suplexes for a competitor with little in-ring experience.

So, this doesn’t sound that bad right? Brock is the evil heel, Rey and Dominic are the underdog, brutalized babyfaces, this is what bad guys do to the good guys. But therein lies the question of why? What purpose did this serve? Some have speculated that Rey is set to be paired with Brock’s former UFC foe Cain Velasquez and that this beating will be the catalyst for their partnership, setting up a UFC dream rematch between Lesnar and a man who beat him for the UFC Heavyweight Championship.

Great, except, Cain Velasquez has not signed with WWE as of this writing. It’s only speculation at this point, which means that all WWE did was feed Rey and Dominic to The Beast on the off chance that they sign Velasquez. But what about Rey himself? He’s now gone from being a contender for the WWE Championship to being chumped out to Brock Lesnar for potentially no good reason at all if WWE were to lose out on Velasquez or, even more likely, never planned to have Velasquez in the first place and simply failed to care care of Rey as a top guy that he is. 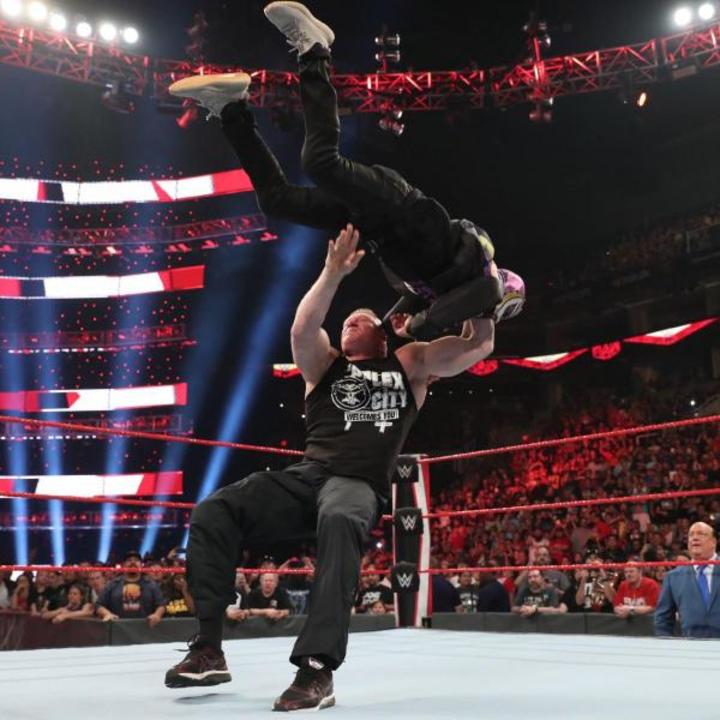 Sure, Rey got beaten up by a much bigger competitor, but Rey is also a former world champion whose size should not matter in this scenario, this being the context of a professional wrestling arena. Rey should have had a moment to fight back, a brief, flickering hope so as to remind the audience that we should take him seriously as an in-ring competitor. That never happened, and now Rey is badly damaged goods who can’t be taken seriously against bigger wrestlers.

Seth Rollins is also a babyface and the WWE Champion, as well as supposedly someone who admires Rey Mysterio, so why didn’t he try to come to the rescue? Is Seth a coward who wanted an advantage against Rey if their match were to still happen later? No, Seth even chooses another opponent after Rey is ruled out of action. So that's not the answer. So where was Seth? We never got an answer to that question but we did get the promo interview you see linked above.

That promo only raises the question: Where were you Seth? A little bit of storytelling could have gotten the WWE out of this booking conundrum. Simply have the commentary team say that Seth hasn’t arrived yet and he’s covered and doesn’t look like a cowardly chump who watched a fellow babyface and his son get the crap kicked out of them. Or, shoot a vignette where Seth is just arriving at the building just after what happened to Rey. Without those minor touches, it appears that Rollins sat back and watched as Rey and his son were beat up and did nothing.

2. The rest of the babyface locker room look like chumps.

The Miz, Apollo Crews, Ryder and Hawkins, Heavy Machinery and whoever else you can think of among the supposed babyfaces of the Raw locker room look like cowardly chumps. Here is the popular and beloved legend Rey Mysterio and his teenage son being victimized and no one from the locker room comes to try to stop it despite an endless amount of opportunity? This segment was loooonnnggg, nearly 10 minutes of TV time, and Brock Lesnar took his time getting Rey and then Dominic.

Even Brock appeared to be watching for someone from the locker room to come to the ring as he meticulously spent time considering his actions and even leaving and returning to the ring not once but twice. In that time, not one person from the back was booked to come out and try to stop it? Where was Ricochet? He bent over backwards to talk about how much he admired Rey Mysterio just last week. Where was anyone who considers themselves one of the good guys that we’re supposed to cheer for?

Lazy booking of angles strikes again. It's the hallmark of this supposed high point of Monday Night Raw, the biggest shock of the night, the reason we're supposed to stay tuned to see what might happen next. Instead, it proves to be yet another example of the overall laziness and inanity of the Monday Night Raw Creative Team. 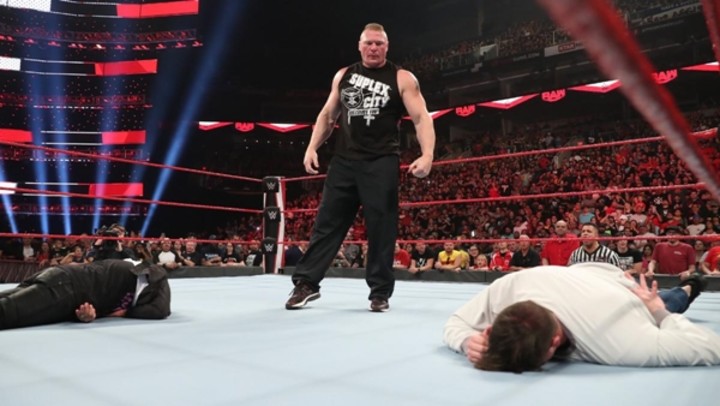 We got trolled. I know we fans of WWE should know better than to trust WWE to deliver on a promise, but dammit if they didn't convince us that we were going to get something special this time. WWE suckered millions of fans into believing that Rey Mysterio versus Seth Rollings, a legit DREAM MATCH, pay-per-view quality, was going to happen on Monday Night Raw.

Like Lucy from Peanuts and that damned football, we Charlie Brown'd ourselves right into the ground thinking that WWE wasn't going to pull the rug out from under us. It's happened before and it will happen again but I wonder just how much more any of us are willing to take now that WWE has real competition again. All Elite Wrestling arrives on Wednesday with their new TNT program, Wednesday Night Dynamite. Perhaps they will not go around making promises and not keeping them.

Yes, we should know better than to believe WWE would deliver a match that they promise. But, it's just that last week they swore up and down that Rey would face Rollins and we were suckered into the idea that they would actually give us this match. Instead, Vince McMahon and company pissed all over fans who allowed themselves to get excited about a match for once on Monday Night Raw.

Instead, what we get is Brock Lesnar beating up small people with no comeuppance and no promise of retribution. WWE got no one over with this angle. No one benefited from this nearly 10 minutes of TV time. No talent made a memorable impact, we've seen Brock do this before, this doesn't help or hurt him in anyway. In fact, this sequence only hurt the rest of the babyface Raw locker room who look like cowards for not trying to save Rey.

And, it hurt an already struggling babyface Seth Rollins. Rollins has struggled to make his character interesting and has relied heavily on getting himself over in matches in order to make up for a truly lackluster character game. His promos are terrible, his social media game is brutal, and his one saving grace is his ability to tell a story during a match, and the WWE took that away from him by keeping him away from an opponent in Rey Mysterio that would have made Seth look like a million bucks.

That's five reasons why Brock Lesnar's beating of Rey and Dominic wasn't as great as you think. Let me know if you disagree on Twitter @MovieusCriticus.

I have been a film critic for more than 17 years and worked professionally, as a member of the Broadcast Film Critics Association for the past 6 years. My favorite movie of all time is The Big Lebowski because it always feels new.