Trump, Saudis, and Nukes, Oh My!

by William Turner 11 months ago in trump

Republicans have no one to blame but themselves.

Is the nuclear power deal with Saudi Arabia finally too much for Republicans?

Republicans love Donald Trump. They had no choice after he declared his candidacy. He won the Republican nomination with his campaign announcement, because once he stated out loud the racist bargain Republicans had been running on implicitly since Nixon, the Party leadership could not afford to disown him, without alienating their base.

Republicans in Congress were happy to have a cipher as president. They don't like Mexicans or Muslims anyway. He signed their irresponsible, unnecessary tax cut. He happily appoints Republican retreads like John Bolton to important positions. He nominates right wing extremists, including several who will not say publicly that the major school desegregation case, Brown v. Board of Education, came out right in the Supreme Court. They mostly get what they want out of him.

He's embarrassing in a lot of ways, and some prominent Republicans have stated their distaste for his gross debasement of the standards of conduct we can and should, and used to, hold the president of the United States to, but Republicans as a class have zero standards, so the Party as an entity has no basis for objecting to his bad behavior, even when that bad behavior includes repeated attacks on a deceased Party leader of considerable stature.

But Republicans in Congress may finally have found an issue on which they will stand up to Trump.

The government of Saudi Arabia wants to build two nuclear power plants. They have solicited bids for the jobs, and companies from the United States, South Korea, and Russia are among the competitors. As part of the bidding process, the Department of Energy has granted approval for preliminary work on the project six times. Each of the companies involved asked the Department to keep those approvals secret, and the Department complied, but the news is now out.

A Democrat in the House of Representatives has asked Secretary of State Mike Pompeo about the deals, requesting that he make the names of the companies seeking the approvals public.

In the Senate, even Little Marco, Senator Rubio from Florida, no one's idea of a profile in courage, has joined a Democratic colleague to ask the Government Accountability Office (GAO) to look into the deals.

Representatives of the Saudi government insist that they want nuclear technology only for peaceful purposes. But that government is an autocracy under the sole control, that anyone can tell, of a Crown Prince, Mohammed bin Salman. Mr. Salman said, loud and proud, on national television that, if Iran creates a nuclear weapon, the Saudis would follow suit.

It would be difficult to find a person who is crazy enough to think that is a good idea. Crazy enough, or clueless enough, as the case may be.

It seems that Secretary of Energy Rick Perry, during a Senate hearing, allowed that he did not know if he had signed approvals for US companies to work on the Saudi nuclear projects before or after the journalist Jamal Khashoggi died at the Saudi consulate in Istanbul, allegedly on the orders of Mr. Salman. Anyone who was paying sufficient attention would realize that this is an important question and go back and look, if he did not remember. Perry is not known for his memory.

Donald Trump is known for his cozy relationship with the leaders of Saudi Arabia.

Trump and the Saudi Orb 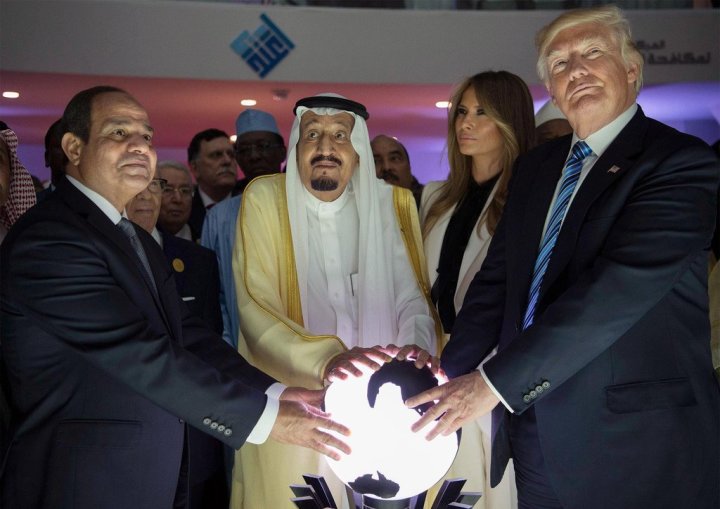 Trump's first major act as President, the notorious Muslim ban, which prohibited entry into the United States, from an array of mostly Muslim countries, excluded countries where Trump has business interests, including Saudi Arabia.

Neither that omission, nor the decision to allow US companies to work on Saudi nuclear projects, is a violation of the foreign emoluments clause of the US Constitution. Article I, section nine prohibits any public official in the United States from accepting any "Emolument" from any "King, Prince, or foreign State." This is a rule against allowing foreign leaders to bribe US officials.

One could compile a very long list of ways in which the Founders could never have anticipated the likes of Donald Trump as president. The Electoral College was supposed to have the effect of ensuring that only the best men (!) became president. It has obviously failed in that mission entirely, and twice in twenty years.

But the Founders thought of bribery in terms that, from our perspective, made the offense painfully obvious and relatively easy to spot. King or Prince A gives President B a chest full of gold, and President B sells out the United States. They could not conceive of a world with air travel and instantaneous global communication, and thus a world where international real estate transactions would become commonplace, much less the complexities of the underlying financial transactions.

The nuclear projects deal with Saudi Arabia may not violate the emoluments clause itself, but it is only reasonable to suspect that some, still secret, violation of that clause is part of the reason why Trump is willing to sell US help with nuclear plants so easily to the Saudis.

But that is an arcane question. What currently has some Republican Senators challenging the President's decisions on this issue is the open question—in some minds, anyway—of Mr. Salman's responsibility for killing Mr. Khashoggi.

It is entirely reasonable to wonder why this particular issue is a bridge too far for Republicans, who have mostly remained silent as Trump has engaged in non-lethal attacks on US reporters who, in the United States, enjoy the explicit protection of our Constitution for their work.

But perhaps we should regard any Republican resistance to Trump's depredations as a gift horse we should not look at too closely in the mouth. Thank the entity of your choice for small favors.

Ph.D. in U.S. history from Vanderbilt, with an emphasis in the history of public policy; two articles published as a graduate student, two books as a historian. J.D. from the University of Wisconsin; eight law review articles in print.

See all posts by William Turner →