Would You Wait for a Quarter? 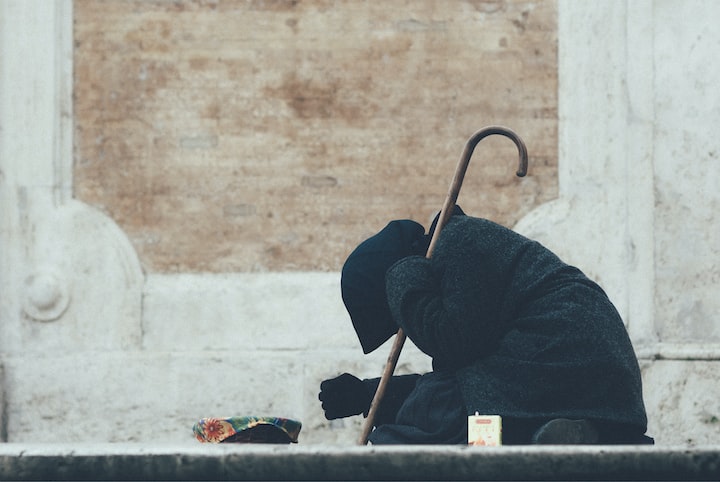 Photo by Egor Myznik on Unsplash

I had finished loading half of my groceries when I was approached by an older man wearing a wool poncho with a cigarette in his hand. I have come to realize by now that I have the sort of luck that causes lightning to strike the same place twice, but am fortunate and blessed in many other ways. After dashing out of one store earlier in the day beside an unruly man authorities had to escort off the premises, I suspected it was going to be another one of those lightning strike sorts of days. I had every justifiable reason to be cautious or even scared, especially in light of recent events. It isn't often that men in parking lots approach lone women with benevolent intentions, after all.

While prevention is ultimately the best solution to an issue of this sort, prevention is not always possible. By the time I noticed the stranger out of the corner of my eye as I unpacked groceries from my cart, he was already nearer to my vehicle than was ideal. I knew I hadn't seen the man in the parking lot on the way out of the store, but suspected he had crossed the road between the time I left the store and the time I had loaded half of my groceries. I try to be aware of my surroundings and people especially when I am alone, but it doesn't take long for a concerning situation to arise.

When I saw the man heading my way at a relative distance, I kept my eyes on him. I mentally noted that it was broad daylight, and that I had parked near the store by other smaller cars so people leaving the store would see what was happening if he should choose to approach. I asserted a no-nonsense stance, and tilted my body half-way between my vehicle and the remaining lot overlooking the road to give myself options and ensure my view was clear. My small wallet-type purse is always attached to my physical person when I go out, and still allows maneuverability in case of altercations. As the stranger began to speak to me, he stayed at a distance of eight feet.

I gave him my attention while I weighed my options for fight or escape. While I have been advised by others to avoid eye contact and speaking with individuals, I have been in situations where following that advice caused a stranger to move closer. I instead chose to keep my eye on him and engage him in conversation. I wanted him to know that I am not an easy target or intimidated by him. I do not know if this was the right thing to do, nor do I advise this. I firmly believe that many of these types of situations are on a case by case basis and that there are no true answers on how to handle all of them. A combination of quick-thinking and awareness are the only things I know once you are past the prevention point. You must make a swift decision and follow it through.

I had already assessed that this man could have negative intentions, but that he was not currently in the same state of threatening behavior the man I had passed in the prior store was. When he asked me if I had any change, I informed him that I had a quarter inserted in my cart, and that once I returned it he was welcome to it. I made no motion to my purse, and loaded my few remaining bags of groceries one-handed into the back of my car without removing my eyes or body from facing him. The man chose to wait on the quarter.

It was a mild red flag. In my left hand, I already held my longest key between my index and middle finger in case I needed a quick makeshift weapon, and placed my thumb near the panic alarm for my car. I knew I could scream and hit the alarm to alert those around me of the situation if he became an issue. I also knew that I could jump into the back of my car, lock it swiftly, and possibly climb into the front seat to drive away if I was fast enough. I do these things unconsciously after past experiences and learning a few tips from a self-defense course. Still, it isn't ideal or foolproof. Cognizance, state of mind, and swiftness of decision are the utmost importance, and I knew that I had options; choosing could be done in the moment as fast as possible depending on what happened.

The stranger continued to talk and asked if I knew of a place around here where he could get cleaned up, like a church or something. I told him that there weren't any close by, but that there were probably some places downtown. I knew there were a few downtown that used to allow it, but I did not know of any at present. He would likely have to talk to someone who knew of such locations-possibly a bus driver if he had a bus pass. He disregarded the bus comment and said, "Ah, maybe girls or something, but I've been there and they won't let me." This further piqued my suspicion, but he did have a point; there were more resources and accommodations for homeless or displaced females within the community. I asked him if he had tried the local homeless shelter, and he informed me that he wasn't allowed to shower unless he joined their program. This also caused my hackles to rise, yet he still wasn't acting truly threatening. I responded with, "That's odd."

I knew limited information on various programs from the social service position I held years ago after graduating college, but I had not kept up with that type of agency awareness since leaving. I knew that more programs were available for women. I also knew that years ago, the only individuals that were turned away from the mission were violent, sex-offenders, or substance abusers. I had transitioned from that social service position to an administrative position within a law enforcement office years later that I recently left. I knew how many halfway house failures and prisoners that law enforcement office picked up from the homeless shelter on a regular basis. I also knew that the homeless shelter had changed management and supervision several times since my social service days, and that I actually didn't know any of their rules or standards of behavior. I also realized that I had no idea of how any of the social service locations were operating sine COVID-19, and so many things had changed for everyone since then.

I obviously did not let him know that I had any knowledge of such being the case or any information about myself. I began to return my cart to the store entrance while the man paralleled me at the same eight-foot distance away without leaving my eyesight. He made no movement toward me or my vehicle. I did not let my guard down, but his behavior did surprise me a bit. I was glad he wasn't moving closer.

A somewhat elderly gentleman accompanying his mother to the grocery store saw this man beside me, shouted that he wanted my cart, and swiftly took it from me. I was concerned about what to do since I had already promised the man now following me the quarter for my cart. I was ruffled despite being at the store's entrance with people and cameras close by. I still knew it was not the time to dig in a purse for change, then thankfully the elderly gentleman handed me a quarter for the cart. To his surprise and likely chagrin, he watched me approach the man now by the store entrance and hand him the quarter. I told the stranger that I was not educated on facilities and programs, but that I hoped the bus driver or someone else would better be able to help him as he took the quarter, turned his attention toward the store entrance, and I got into my car and left.

As I drove out of the parking lot with my full grocery load safely inside my vehicle, I watched the Good Samaritan who tried to come to my aid watch me and wave as he assisted his mother out of his vehicle. He had truly done the right thing in that situation by trying to assist a single woman with a "stranger-danger" problem. I knew I had placed myself at risk by conversing with the stranger, and promising and approaching him with the coin. In truth as cautious as I was with how I handled the situation, what I did was stupid and I was lucky for being able to make my escape. On the way home, I considered the situation.

I decided this explained the reason he stayed as far away from me as he did, though perhaps he noticed how on guard I was instead. He may have decided I wasn't an easy enough target and he would take what he could get (the quarter) instead. I won't ever know the true answer to that question.

I would not have been able to avoid this situation; there was no further preventative measure I could have implemented for this scenario. Because I had given him the quarter, conversed with him, and followed my word with action, he knew what to expect with me and did not push further.

I considered myself lucky and fortunate for leaving this scenario unscathed; however, questions remained in my mind. I would never know this stranger's background. While the man did not harm me, he still could have been violent, a sex offender, or a substance abuser. Based on my history in social services and recent law enforcement knowledge, a homeless shelter insisting he apply for a program was a red flag. However, I also knew how many prisoners had been taken from that same location. If I was homeless, would I want to be housed or shower with those types of people? No, that would make me fear for my life. Instead of being that type of treacherous person, this stranger could have been the opposite. There was no way to know who I was dealing with.

I drew some uncomfortable conclusions.

While I know nothing of this man's life or circumstance, there is only one true thing I can tell you for certain about him: He waited for a quarter. The lingering thoughts that finally captivated my attention were less about my safety, and more about hoping the man found someone who could help him with what he needed or at least gave him more than a quarter. How drastically do our perspectives change based on the circumstances we are placed in, and how much more grateful and aware are we when they do?

More stories from E.L. Martin and writers in Psyche and other communities.