With the hands of a sinner

by Speechless 9 days ago in depression 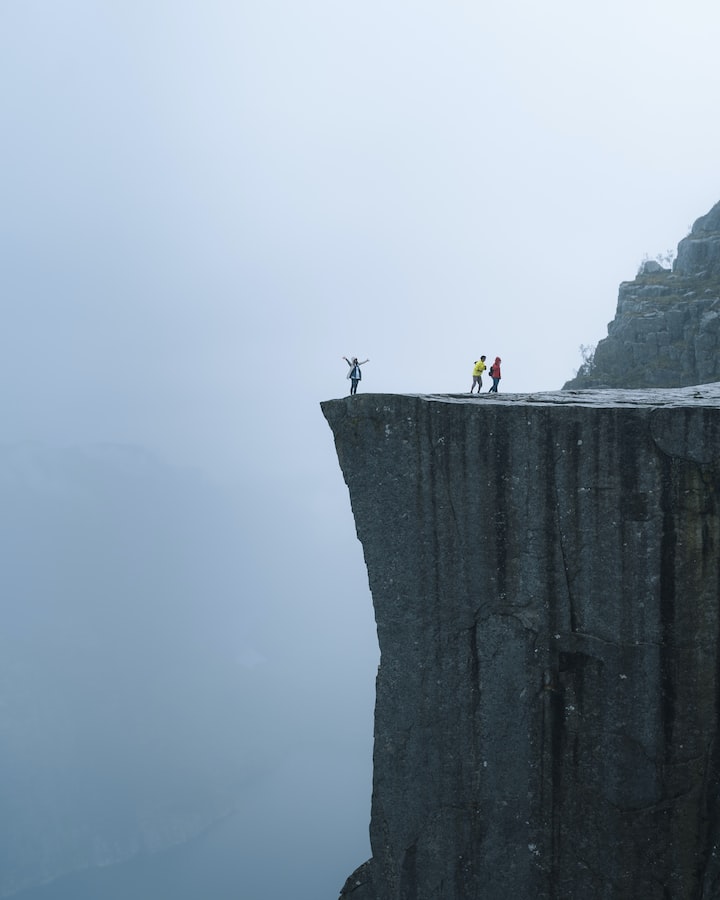 Photo by Valdemaras D. on Unsplash

Maybe it was just a hallucination or maybe it was the sun which began to rise and reflected in her eyes. Whatever, it was fascinating, beautiful.

Like many mornings I started running up the hills, my legs were always hurting and my heartbeat at the highest, from the heavy workout, I could not live without anymore.

But at the end, what took finally my breath away, was the view from the top of the mountain. So out of this world, I could stare into it's deepness forever.

My sweaty body and hair sticking to my face, I felt nearly embarrassed standing next to this beautiful creature. Her knee long green dress fluttered around her thighs. Her bare arms were hanging loose and relaxed next to her hips, her long hair brown as chestnut, seemed to wave with the wind.

She never seemed to notice the beauty of the country side, neither did she see me at first. Her eyes looked like they were staring into nothing. Her face was pale and as much as I could tell she certainly wasn’t happy.

Later that day I was sitting at my desk, going through some numbers for work. I used to love my job, I had a career until I lost all interest out of sudden. Every day seemed to go by in slow motion. But I was never able to share my feelings with anyone, which is why I chose running. The flat, I was living in , close to a small town center, which only offers one shop for food, one store for clothes and two pubs, was ever so empty. I wondered a long time ago when I became that lonely. Something began bothering me a long time ago, some emptiness I wanted to run away from as far I could. But my mind told me not to be afraid of it, I rather started liking it. I didn’t like talking to people anymore, they were just annoying me constantly, like little bugs I needed to squash.

I was thinking a lot about myself and my life. What it would be like if my family and partner would still be alive if I would not have turned into that person I am today. Something bad got into me and something I was never able to stop. This hatred which came over the years ate me up and ripped my heart into pieces. And there was I now, picking them up and trying to build them together. Without any success.

My hand balled into a fist. I wanted to destroy something. Hurt someone. I couldn’t bare this loneliness and guilt anymore.

But then I thought of the girl standing at the cliffs. She made me smile and I started to relax. She was so beautiful, that I wanted to touch her and I wanted to feel her skin and look into her stunning eyes. She reminded me of someone. Someone who used to be so happy and now needed to pay for a terrible mistake.

I rose early the next morning, waiting and pacing and pacing until the sunrise. My muscles were tired but desperate to move. Since a long time I was not able to run in the dark anymore, as I always thought something was following me, running next to me in the bushes and watching me. I was afraid of whatever it was, even afraid of myself. I didn’t understand myself anymore. Too many secrets, to many unsolved mysteries I have experienced and lived with.

The sun was up and I started my run to the cliffs. The air smelled fresh, like the poison of cars and living humans have been erased over night. The grass actually smelled green and the trees whispered in the mild wind. My hurrying footsteps echoed on the ground until I reached the forest which lead me up the hill. I was exhausted but I kept moving. I needed to see her, talk to her. There was a connection I couldn’t deny.

Finally I have reached the top and looked around. I spotted her closer to the edge of the cliffs than last time. My heartbeat fastened and I could hear the blood rushing through my veins. I took step by step until I finally stood next to her. I saw her chest moving each time she took a breath. She looked so sad and I could see she was crying. Silent tears were running down her cheeks, but she had no intention to wipe them away.

She turned her face in my direction and looked into my eyes with such deep understanding that I nearly started to cry myself. I smiled at her but she didn’t smile back. “It wont get better” she whispered. “it never will until you end it” her voice was soft and no more than a whiff.

I nodded, because I understood what she meant, I understood the deeper meaning of it and that I had to do what she wanted me to do.

I raised my hand over her shoulder. When my fingertips touched her naked skin, a strong feeling came over me. I hesitated first, because I didn’t want to loose control, but then I closed my eyes and let go. All what I have seen was neither the present nor the future. It was the past, so dangerous and cruel, it stopped the world from moving. I saw blood, lots and lots of blood, I heard screaming from people I couldn’t identify in that moment, they had no faces.

Their screams would follow me into my deepest nightmares. There were shadows wandering around. They were watching and haunting her. I cannot explain it but I could feel thoughts of guilt and shame, which made her so sad. The sadness was so dark, it was impossible to find a light.

A realisation like lightening came to my mind. Something I tried to run away from for a very long time. These flashes and bad feelings, they were not only hers, they were also mine. The ones I tried to bury with bricks I also used to build a wall around me. The unfairness and coldness I have done to others is now breaking through these walls and looking for revenge.

I opened my eyes and finally caught her sweet little smile. Now it was her turn. She raised her hand and I could see it was blood on there, which hasn’t quite dried yet. It wasn’t her blood rather from someone she must have loved. She touched my arm and nodded her head slowly. “You cant run away anymore, it will follow you forever and destroy you”

I didn’t say anything. My mouth was as dry as sand and the bloody handprint she left on my arm started to burn. “You know what you have to do”

With these words she turned around and got to the edge of the cliff. She opened her arms, lifted her chin and smiled. Then her body started moving backwards and forwards, like in trance. With the last move she was gone, falling down, falling and falling until she would hit the ground eventually and shatter her bones into a million pieces.

I just stood there speechless. Not able to move, not able to make a sound. I could feel her falling, I could feel the strong air trying to catch me. I couldn’t feel her body hit the ground, because I think I was not ready yet.

In shock I finally reached home, hoping it was just a dream. I ran into the bathroom and vomited the little breakfast I had. I begged my sanity, when I looked into the mirror that I was looking fine. But I didn’t. They were there. The prints on my arm were real. I have been touched by the hands of a sinner. I took a deep breath and looked straight into my eyes. So green – the colour of hope, the colour of life, with a shimmer of gold. The colour of courage and wisdom.

After a sleepless night, I got up early. Again I was pacing and pacing for hours until the sun started to rise. Finally I noticed the first light falling through the windows. I knew what I had to do. I knew I had to stop this misery which was haunting me and would haunt me until the end of my life if I didn’t end it now!

I smiled and felt happy for the first time, when I picked my favourite dress. It was green.

depression
Speechless
Read next: Never In the Cover of Night
Speechless