by Camilla Rantsen 8 months ago in eating

How I overcame my anorexia with help from vampires and comic books.

I was recently asked what my favorite comic book was when I was growing up. My answer: I didn’t read comic books growing up. They seemed to feature mostly ducks and mice in outfits, which unnerved me and so I took my shaken soul to other forms of reading material like Laura Ingalls, Astrid Lindgren, Daphne Du Maurier, Oriana Fallacci, even Erica Jong. (TOOOOOOO YOUNG. NOT READY. STILL NOT READY)

But I thought about it and in there, in the filing cabinet of my brain, there it was, a memory. I did read a comic book series for a period of time. It was called Sølvpilen. It means “The Silver Arrow” in Danish, and it featured a Native American man named The Silver Arrow, which you might have guessed. He saved a lot of things and, naturally, had a lot of pumas, not the sneakers, the animal pumas, which apparently were plentiful in North America according to this book. I don’t know why this was my one foray into comic books, but Silver Arrow was a very, very attractive Native American cartoon man, which upon further investigation was originally written in Flemish and now I worry how much Belgians knew about Native Americans.

Does any of this sound OK?

In my short-lived but feverish obsession with Silver Arrow, I created a small club called the “Puma Grotto.” It was a garden shed, which I decorated really beautifully, as grottos are known for Danish design. I think I was around 10 at this point. None of this is OK. I know that. My friends, who had been lured into a Soho House/ Fight Club-like membership to the Puma Grotto, eventually staged a revolution, citing my incessant need to talk about both the décor and the Silver Arrow. They felt we should branch out. I branched, to Prince, and Michael Jackson.

So, it turns out I did read comic books. And now I write them and I write about vampires. Why? I don’t know, I claimed as early as yesterday. But I do know that I have always been fascinated by my own nightmares. This is just getting sexier and sexier, isn’t it? I’m fascinated because they really scare me, but they also have a certain order to them. This… just explains so much. Hello, personal relationships. But the thing is, I have always had a serious free-floating imagination, and if I get a little bit of information or even snippet of an image, I can really build on it, and build, and build, and build, and build, and build. I can also do that with people, give you attributes you don’t have and you may not want, and then get really angry when you don’t have them. Or make very elaborate excuses for people I love, but can’t quite understand what they are doing. One could ask, 'but what’s exactly is that going help?' I’ve got an emotional short position going here, how dare you?

I digress. I do, all the time. Brevity is so 2018 and not very female. Or not very this female.

So I write about vampires. I had seen little snippets of Nosferatu. Don’t see it. It’s terrifying and they didn’t add a sexy 80s soundtrack like they did with Metropolis. It’s horrifying and brilliant, even in snippets.

But. More, importantly, isn’t vampirism just the ultimate eating disorder? And my vampires are just trying to live in the best way they can. So one drinks blood, no? Survival of the fittest? Circle of life? The Lion King? I don’t know, it was a cartoon.

I never really drank blood, but I did have an eating disorder. Yes, I had one of those. I was anorexic. It means that you don’t eat, ever. I have never been on a diet in my life. You just don’t eat. You get really thin. If you are especially good at it, your family grasps at straws and tries to find things that could help you, and usually when certain businesses, medical or otherwise, see you have an urgent need and you’re willing to spend money, they end up being more hurtful than helpful. First time I lost most muscle function in my body, lost my hair, lost friends. I was scary. I weighed 50 pounds. I was 5’6. I was 14—the ush'. Eventually, I sort of got myself together, I don’t remember how, but I got myself to a sort of a livable weight, but I do remember a certain kind of “treatment” that I got and I didn’t want to go back to him, the “doctor,” so I did what I had to do. I will write about this “treatment” another time, because it got somewhat gruesome and god forbid I should go there, I’m writing a horror comic book, for God’s sake.

I then got myself to London, auditioned for an acting school, got in and literally moved to a different country when I was 16 and lived by myself. I did well, I did exceedingly well, things couldn’t be better, they couldn’t, and so I broke again, I broke into a thousand pieces of smiling, good smelling confetti pieces. Anorexics really don’t do that much. We work really hard, smile a lot and smell good. I took a deep dive again and again, and then again, I worked hard, I smelled good, I smiled, again, again, and again…

And then Los Angeles chose me. Or I came here, but you know, the reasons for coming here always seem obvious, but we stay and then we realize that they were, at best, mysterious. I came to Los Angeles, no green card, didn’t know a soul. The thing about LA is that it is set up to perfectly to destroy you, in a really cinematic way, but, ironically, it also opens up a world of healing from the array of destructive things you may choose. I found my body in a city that is often against that sort of thing. I also found my mind, which I have learned is sort of a sexy beach hotel that I like to live in until the room service fucks up. You know what I mean.

That is why I think I write about vampires. It’s on the page, it’s in the books. And my illustrator has captured them so beautifully. And of course, they’re vampires in Manhattan. They need stuff to drink and they need to look good doing it. They’re alpha females and trophy wives. They work hard, they smell good, but they don’t smile as much. For them, that’s a lot more hazardous.

Here's a sneak peak of my comic book 'Swallow.' 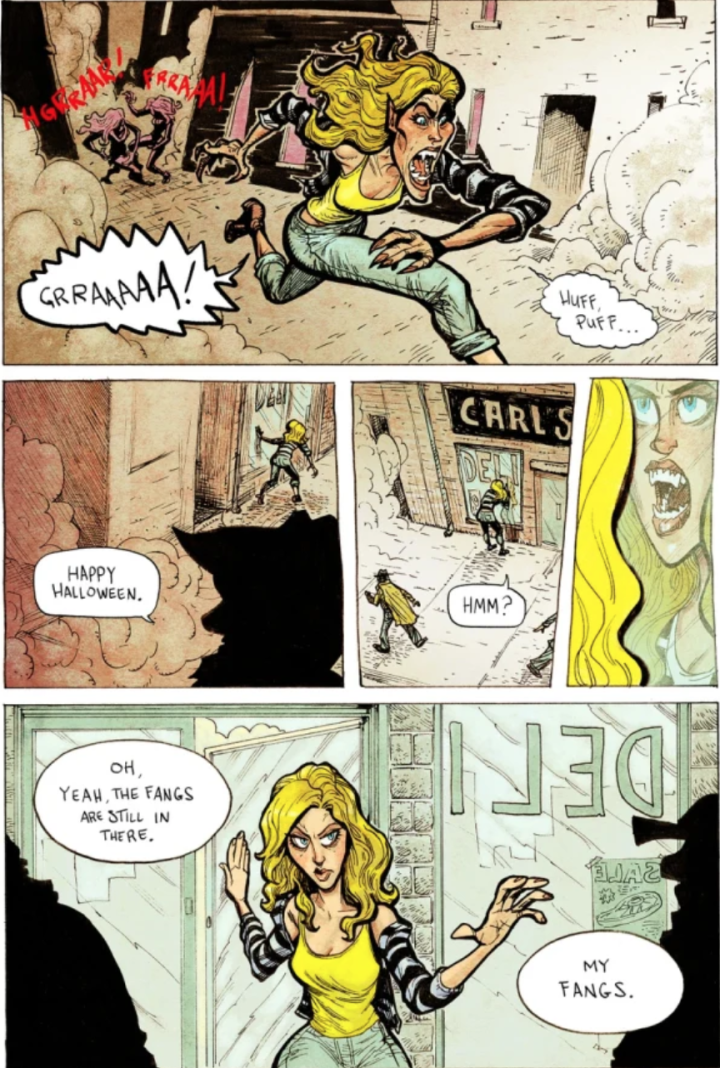