by Rick Adventure 2 years ago in humanity
Report Story 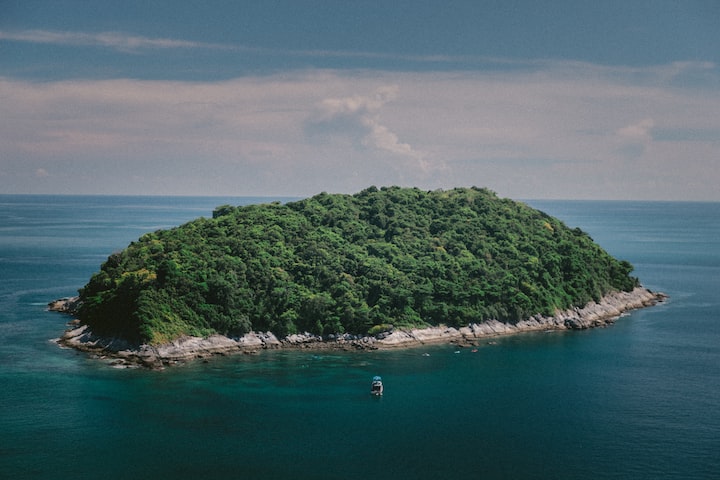 A mysterious voice thunders from the heavens, “Fair winds and following seas.” The inhabitants of the island stop in their tracks and stare into the sky.

The inhabitants of this island are not natives neither are they guests. They are there by choice and by decree. Exiled to this place by events unclear to any of them, eventually they find peace, resigning themselves to the fact that they will never leave. All of them except me. I resolved long ago that one way or another I would live up to my namesake, any outcome would be preferable to this existence. My name is R. H. Peterman. My father was a pessimist, my mother an optimist; they compromised and named me Rem, from Latin for purpose and Hevel which is Hebrew for meaningless. I prefer being called Peterman; my parents were philosophers, but generally I’m just a dick. I loathe my existence on this island; every day skews closer to purgatory, not quite hell, but too far from paradise to catch any glimpse of joy.

The island is small, as it could be walked in a day if traveling east to west along the shore on the southern end. The journey from the northern tip of the island to its southern end was far more arduous and long. The island was relatively tiny by continental standards yet diverse with life, geography, and natural resources. A river flows from a spring on the north end of the island and flows almost exactly through its center. The mouth of the river was surrounded by mountains that are challenging to climb but not impossible to traverse. As the tall mountains give way to rolling hills near the center of the island, thick forestation grows unhindered. The forest is alive with all manner of beast and bird from ibis to impalas, carnivores and herbivores coexisting in an unbroken food chain, recreating and destroying itself in the cycle of life and death. The base of the river is surrounded by rich delta soil, which could provide the inhabitants a cornucopia of herbs and vegetables both medicinal and editable, had we been so inclined and skilled to toil in the earth. But we are not. At least not yet. More urgent needs preoccupy our minds, or at least my mind. I’ll be damned if I spend one more day here!

“Fair winds and following seas” ring the redundant shibboleth— some speculate it to be the voice of God. I’m not sure, and I don’t much care. The voice is much louder today than usual. I meander down a well-worn path to a centralized tree to receive my daily allotment, a couple of berries that grow in abundance on the tree. No one is quite sure as to the substance of the fruit, but somewhere, someone discovered they were sustaining and filling, albeit chalky to the taste. The tree is protected by a sleeping bear; we are careful not to wake him from slumber. “Hang in there Peterman” retorts a fellow islander. I don’t recognize him. I’ll hang you! I think this but don’t dare utter as to not awake the bear. I pluck a couple of berries and move on. There is a long line behind me; I put the berries in my mouth, momentarily hiding them under my tongue, just long enough to turn my back and feign a sneeze. I deposit them into my hand. Returning to my refuge, I deposit them in my collection. Taken two at a time they keep the inhabitants of the island in check, rendering them virtually catatonic, but with the collection I’ve been amassing, I’m betting these berries will be my ticket off this island.

I gathered enough in my estimation to render my body buoyant, and tonight will be the night that I will toss myself into the sea. In all my years trapped here, on occasion a ship on the horizon has appeared, but without the collective will to call for help and rendered apathetic by the fruit of the enchanted tree the residents never responded to my exasperation. None wanted to be rescued. They thought it impossible, and most had come to prefer the predictability of the island to the chaos of the life they left behind on the other side of the sea. It was a Sunday. The religious remnant gathered around a fire, I could hear them singing as they did every Sunday,

“I'm getting ready to leave this world,

(I'm a getting ready to leave this world of sorrow)

Getting ready for gates of pearl;

(I'm a getting ready for the gates of pearl)

Watching, (both day and night)

I'm getting ready to leave this world.”

“Fools!” The universe rewards action not singing. One by one, I deposited the despised fruit into my mouth, the dryness of its aftertaste rendering my throat cottonlike. I lost count at eight as the monotony of the island faded to black.

I awaken to the familiar voice; “Fair winds and following seas.” I open my eyes carefully to a world that is familiar but unrecognizable. Did I make it off the island? Surrounded by so much whiteness, I struggle to get out of my bed; my familiar bed of leaves and branches is now a mattress with a single sheet and pillow. Everything is sterile and clinical. I stagger to the edge of my refuge; the opening now has a door, and it becomes clear to me that I am no longer on the island, or am I? Am I dead? I open the door slightly; a long hallway has replaced the well-worn path. I shuffle out the door and down the hall, I recognize some familiar faces but they are no longer clad in their island attire. I look down, my clothes are different as well. The ragged clothes rendered torn by our survival of the sea have been replaced with robes, gowns, and slippers.

“Nice day Peterman?” a passerby stares at me and smiles. “Nice day, my ass!” He frowns, I keep moving forward determined to figure out where I am. My ears are ringing, and my mouth is dry. I carefully navigate the long hallway holding tightly to the wall as to maintain my balance. As I approach where I remember the tree being, to my surprise it is gone, replaced with a desk with attendants in white lab coats and scrubs of assorted colors coming and going. They are all too busy to notice me. Did the berries render me invisible to them? To my right and left are multiple hallways all finding their origin in this central hive of activity, emptying into this dreaded end, sandwiched between steps for the able bodied and ramps for those whom mobility presents a challenge. The desk is populated with screens and blinking phones, a myriad of sounds emanating from their electronic sources communicating activity but never productivity. The faces of those sitting in front of the screens and answering the phones exhibit a total lack of empathy. They pass the time as mindlessly as the islanders intoxicated on the bewitching fruit of the enchanted tree.

I recognize the familiar shape of a panopticon. I recall my mother and father discussing with vigor Foucault and his Discipline and Punish. Fear grips my mind as I remember the details of that book. Will my fate be that of Damiens? I’ve committed no regicide! Will I be drawn and quartered? I try to move faster, avoiding eye contact with anyone, but my body refuses to cooperate. “Mr. Peterman are you ok?” The bear speaks! I have awaked the beast! The bear is a woman, rather portly with an unattractive disposition. She grabs my hand in an attempt to guide me. “I will not be handled, you grizzly!” I pull my arm violently away from her and push her as I turn to attempt my escape.

As I turn time stands still, as if I am moving at incredible speeds and everyone else is moving in slow motion. I notice the dazed and confused islanders sitting and finding amusement in what is transpiring. A happy and attractive weather girl smiles in front of the five-day forecast on multiple monitors. It is going to rain on Tuesday.

Where the islanders sit is decorated with tropical plants, all plastic, the walls are painted with animal motifs featuring a variety of monkeys, birds, bears, and elephants. This doesn’t make any sense. In the middle of this recreation center there is a small fountain, no doubt an attempt to render the space feng shui? Elements of wood, fire, earth, metal, and water conspire insipidly, but there is nothing inviting, nothing soothing, nothing enjoyable about the arrangement. It seethes with mediocrity, redundancy, and a general lack of imagination. It is the opposite of art, it is kitsch, offensive, and ugly. Odors repel my olfactory from every direction to the extent that bleach filled mop buckets carefully staged in dark corners is an appreciated momentary reprieve. It dawns on me that every detail of this place that I have hated since my arrival is made exceedingly worse by its reality untempered by my manic illusions.

Then a fog returns to my mind; time and space align, and my head pounds with pain as I hear the familiar words emanating from a speaker above me “Fair winds and following seas.” Stars appear in front of my eyes but beyond my grasp. I cannot think, I cannot make sense of my surroundings, I reach for something to hold, to steady my shaking, frail body, but no such solidity exists. I wobble forward and then back, flailing, treading the treacherous waters of this unknown sea. I have succeeded in plunging myself into the abyss! I struggle to breathe. I sink into what feels like freedom. I look up one last time as those apathetic behind the desk now rush towards me with urgency. Once again, my reality fades to black.

There is a ship on the horizon. My ship has come in!

After what seemed a lifetime of darkness, I’m able to open my eyes ever so slightly. A siren blares in my ears as a multitude of wires crisscross my body and electronic beeps populate monitors above me with regularity. An unfamiliar, kind face greets me, “Stay with us Mr. Peterman; we’re going to get you some help.” Petite fingers squeeze my hand, and for the first time in months, maybe years, I am comforted. I manage to catch a glimpse in passing as the horrific reality retreats from my sight. I read the words; “Island Oasis Retirement Home and Nursing Facility.”

More stories from Rick Adventure and writers in Psyche and other communities.