by April Perez about a year ago in humanity
Report Story

Every person has an unknown story. 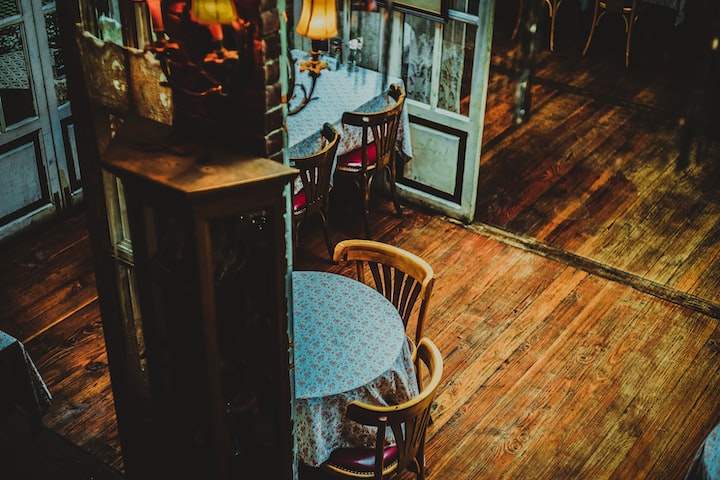 Photo by Kenny Luo on Unsplash

Salman's Shop, an odd cafe that served tea and coffee with quite peculiar dishes for the guests that sought sustenance from it. Kinds you wouldn't ever order with coffee or any of the teas sold there. Dishes like rotted fish gut fettuccine, jelly moose nose pudding, and pickled camel cream with lots of other unfitting alternatives.

The owner was somewhat of a stoic man despite his colorful menu, always serious without a trace of any emotion or personal opinions. Which made for excellent catering. Service was always straight to the point, yet polite.

The shop itself was rickety, creaky, very aged, and made purely out of pine wood. The wood was very rustic in appearance, and there were a few cracks and chipped pieces. It's walls gave a faint aromatic scent of pine cones that filled the tiny cafe with an unexplained warmth.

A nearby train accelerated with loud blaring beside the small business. It rattled and shook the building side to side like an ocean wave. Outside it looked as though it'd collapse but inside was different

Tea pots continued to whistle, tea cups were filled, dishes were piping hot and the consumers seemed unaffected. Almost as if time was frozen still.

Untouched and undisturbed by anyone from the outside, yet still had frequent visitors.

The place was an enigma itself, however. Being only opened during the blazing hot summer months from June to Mid August, Salman had many wonder how a shop never opened during the winter season could be so warm.

In the little town of Salman's shop, it was endlessly, scorching, and yet somehow with there never being any snow, nor hardly any rain...most of the inhabitants only hearing of the former, the shop was still warm in their minds.

"Evening gentlemen," a man with a kind face, brown coat and clear specs greeted as he closed the door behind him.

"It's a nice morning to order an earl grey and a steamy bagel, wouldn't you men agree?"

Peering into the cafe there were few tables and exactly three men sitting all together quite smashed at one area.

The owner, Salman, looked busy as he was busy mixing something together behind the bar counter. The spectacles man would have guessed but instead sat with his fellows.

"Course, Joseph, it's a fine day. But when is it never a fine day here? It's so peaceful." Delaney answered, one of his four best mates.

Delaney was a rather hard and quiet man, keeping to himself but still appreciating the company of others. Today he seemed content to speak.

"Only thing I need now is a Beautiful, jaw-dropping-"

"Pair of new teeth," Maxwell laughed. "Yeah, yeah we know you want a woman Delaney but you can't get enough of the brotherhood here."

"That I will agree with" another voice answered as Joseph smiled.

"You seem to be quick to fill your guts full, today, really eager Maxwell."

Maxwell grinned as Salman put five cups of fish gut fettuccine onto the table. The smell was strong, pungent and had a tough sting.

"That stench is so rancid, honestly. Maxwell, how do you eat that?" Jankel covered his face with a napkin.

"I..." Maxwell's muffled reply followed the sounds of him slurping the fettuccine quickly, his shirt becoming messier by the second.

"Well," Joseph coughed as he took out a menu. "Maxwell's wife doesn't cook very much, thought everyone knew that."

"Course I know why," Jankel laughed. "My sister can't cook to save her life. But neither could my mother, our father did all the cooking.

I once got food poisoning from my mother's food, you'd be surprised how bad of a chef she is. Feel bad for you, Max."

Delaney yawned mid sentence and kicked his black boots off as he wiggled his toes on the table. "If anyone of YOU dares to eat the food here and ENJOYS it, well I'd wager you don't know what real food is."

Before anyone could reply, Salman came up to the table staring intently at Joseph.

"Oh, hello Salman. Business is booming today, isn't it?" Joseph joked, as he stared at his three friends.

They shook their heads.

"Right," Joseph observed the emotionless man, eventually his eyes moved out of self-consciousness to trail up and down the menu.

"I'll just have a coffee, a simple black coffee no sugar."

"Joseph, you order the same thing everyday!" Jankel remarked. "Don't you get tired of it?"

Joseph shrugged. He never really thought about it much. If you truly enjoy something, when would it ever become tiring or a nuisance?

"I think if you truly enjoy something you wouldn't ever grow tired of it, maybe you'd decide to have something different. But eventually you, or at-least I, would always go back to the classics.

Besides you can't go wrong with a nice cup of coffee, it's simple and uplifting."

"That cup is more bitter than Mr. Salman's face."

A grunt was heard and when all the men turned to their right side, they saw Salman standing with an even more bitter face.

"Uh, sorry, sir..." Delaney apologized while sitting up straight and removing his feet from the dining table.

Salman nodded, leaving to the bar to fix up Joseph's order.

Maxwell and Jankel cackled hysterically as they prodded Delaney.

"You really acted like a nine year old school boy, about to get his backside spanked by mommy-"

Jankel was near tears as he leaned over Maxwell crying from his laughter.

"You know," Joseph whispered as he stared at his friends. "It feels odd, very odd...but I feel like I miss you all. Almost as if you aren't here."

Joseph looked outside, it felt like hours passed but was still very clearly day time.

He shook his head, with an eery feeling still lingering on his back. He felt cold.

Maxwell, Jankel and Delaney kept bickering as Salman returned with a cup of Joe.

"Thank you," Joseph answered as his fingers traced circles beneath the table.

"Uh..." He stuttered as his friends sat there staring at the newspaper. "It's too quiet, if you all noticed..."

"You can say a joke, say anything at all. How about you Maxwell?"

Joseph's heart sped up as he got no reply, unease inside his heart as to why they did not break the tension in the air.

"Am I the only one feeling this way?" He questioned in a whisper as he frantically wiped his forehead and sipped his coffee, before it turned into slurps then full on gulps.

Slamming his cup on the table, he shifted towards Delaney.

His voice trembled and his throat was parched as a desert.

Joseph relaxed. Seems like they were just relaxing and he worried for no reason.

"I was feeling pretty worrisome, paranoid even...you all weren't answering me. It was weird. Like you were frozen, almost. I mean...you weren't but...you were."

Joseph chuckled as he cleaned off his spectacles. "Silly things in the mind, Now that I think of it...how did you all get here today?"

None of them answered again.

Salman and Delaney were speaking, maybe he'd go join them.

"Salman, Delaney...care for a chat? Maxwell and Jankel are a bit of a bore. Think they're more excited for drinks than chatter."

Joseph leaned on the counter and watched as Salman mixed up two bottles of red wine.

"Well, Salman's occupied, right Delaney? We can talk then? There's this feeling that well...maybe you're all ignoring me?"

Delaney stared at Joseph with a smile. "Got to go to the bathroom, can't wait for those drinks."

It was like a slap in the face watching Delaney turn around.

"Okay..." Joseph felt his chest constricting, the hell was going on?

"Joseph!" Jankel called over as he waved the brown-coat man over.

"What team for football do you think will win this evening? I presume it will be the Sun Stealers."

Maxwell guffawed. "In your muddled dreams, it will be the Killer Knights to win."

Joseph replied. "I-I'm not sure, I don't watch football."

Joseph took his coat off.

He felt sweaty and warm, not the very nice kind that you'd get from a warm fireplace and a cup of cocoa, but an unbearable one.

"Are you all playing a joke?"

Delaney came back, yelling in triumph as he presented the drinks.

"I won't say cheers until I know you washed your hands, Delaney!" Jankel replied.

Joseph felt his blood run cold, and his heart was practically thumping out of his chest, and his coffee felt like it'd rise from his throat.

It's in your head. Joseph thought to himself. Relax, they're relaxed. They are having a good time, the games going to turn on and we'll party.

We will all go back to our wives, just fine. Just glad and meet again tomorrow.

"Well, Delaney and Maxwell, before the game starts do you want to go into my car for a quick smoke? Sorry, Jankel I know you quit."

"This must be some kind of damn awful prank you guys made up!" Joseph finally yelled as he balled his fists, crushing the cigars between his fingers.

"It's been...two damn hours, god knows how long, yet you are all ignoring me like children! Where's your sense!?"

Joseph sobbed as his tears plopped onto the table and into his empty coffee cup.

"You only answer if I ask about the stupid menu or food now, what am I? Are you tired of me?"

Joseph stared at them, his head felt like someone was knocking on it.

No one spoke, no one breathed.

The unsettling silence was there no matter how loud he screamed.

Joseph held onto Jankel and begged him to answer. Pleaded to his friends to even look at him.

His head was spinning and there was just too much silence for him to handle until he heard the sound of a quarter drop.

When his head lifted, he saw no quarter but then he fainted.

Joseph's eyes opened, he wasn't in Salman's shop but another cafe.

"Sorry! It's chaotic today." A waitress apologized as she picked up change off the floor and handed it to Joseph.

"Do you need me to call an ambulance?"

"Joseph stuttered, feeling very disoriented and confused. "What is the name of this place?"

"Sarah Loraine's Bakery, you come everyday at the same time. You always order a black cup of coffee, no sugar."

The waitress tucked her brown hair behind her ear and smiled politely.

"Why would I need an ambulance?" He asked, while staring at the small black notebook on the table.

"Well, you...told the staff, remember?" She looked at him sympathetically, and handed the notebook in his hands carefully.

"Just read this Mr. Joseph. It will remind you-"

Joseph neglected to glance at it.

The manager grinned. "Lucky, isn't he?"

The waitress wondered as she gave Joseph the check.

More stories from April Perez and writers in Psyche and other communities.