Since I got hit by that truck

by Dan Avesar about a year ago in trauma
Report Story 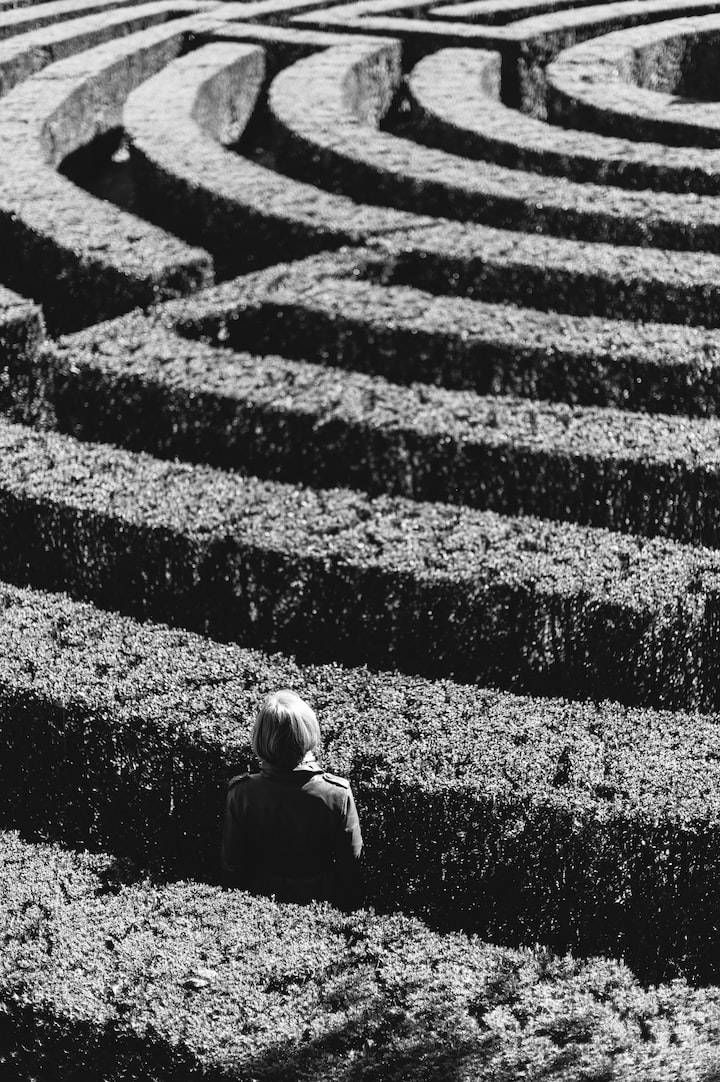 Photo by Maksym Kaharlytskyi on Unsplash

Everything’s been different since I got hit by that truck. That was a month ago. I’ve been holding it all in since then and I need to put it down. I’m going to write it here in my new little black book.

I woke again before dawn, not because of noise, I was just so cooped in. I had to get out, so I wandered over to campus. Between the halls and gardens it was nice to get lost in something grand, something other than me. It wasn’t until I got to the bookstore when I caught a glimpse of myself. I hadn’t done my makeup or hair since the side of my head went through that windshield. It looks like a tight-nit rat’s nest, and my headphones with the red and green bands on either side were like two beacons flashing WARNING WARNING WARNING. I haven’t changed my sweats in weeks. Of course I was wearing a mask, pretty much a total mess.

It was through my reflection, past the lovely winter display where I saw it. It was just on a shelf, but it spoke to me. I spent all my cash and I got it, this little black book. I guess that makes this entry # 1.

It happened that morning, I was so close to getting ahead. My bills were paid, I’d balanced my accounts, and was finally going to start shopping. One more good day and I’d be set for the month. I remember it clearly, I was sipping my latte, trying to get every last drop before tossing my mug inside that new canvas bag that Nancy got me, the one with purple and green stitching. I was in front of my favorite little market when I heard it, a deep rumbling. I didn’t see it, I just heard it. I should have looked.

The next thing I remember was the blood, it smelled like wet rusty metal, dripping on the pavement. Then, an ambulance came. The medic was laughing about how I seemed so chipper. But he was the talkative one. He knew an awful lot about women’s basketball. We chatted about their fabulous center and that new coach.

The hospital was a blur. I got so sleepy, but they wouldn’t let me rest. They did a brain scan and kept me in one of the non-Covid rooms overnight. I guess I consented to receiving blood. The needle went in, like in slow motion. The doctor said the brain images looked clean, plus I had no insurance, so they let me go. The doctor thought my backpack must have taken the brunt of the force.

When I got back I Googled ‘bleeding from the ear.’ It said seek immediate medical attention. Then I slept.

Nancy came over that night and I told her what happened. She was hysterical, but I convinced her I was okay. She put me back to bed. The next time I saw her was a week later. She brought me those tasty egg sandwiches, the ones in the soft hot dog buns from the gas station.

Everything’s been different since then.

It’s not a normal tired. It started in the ER. I watched as everything slowly slipped away. I tried to focus, to gather myself, to talk, to sit up, to do anything. But I just kept slipping. The slipping was me, or my mind. It’s hard to describe. By the time I got to the doctor I was dragging, like a wet blanket trying to pull myself across the floor. I didn’t want to be like that, but I couldn’t fight it.

They thought I had Covid, but I tested negative.

That night, the noises in the hospital kept ripping me awake. Beeps from the monitors, the open and shut of doors, and that nurse with the shrill bird-like voice. It all cut into me. When I got home I finally slept, but then more of the same. When Nancy emptied the dishwasher, the clinking of the dishes was so sharp, stabbing into my head, pulling me out of the deepest slumber. Since then I can feel the beeps of the trucks backing up in the alley behind the bars. People yelling and screaming, getting drunk, having fun. I guess it’s always been there, but now the noise rips at me, into my head in a way I can’t even explain. I can’t tune it out.

Those first few nights I couldn’t deal with it. I tried to Google it, to figure out what to do. Nothing helped.

Ear plugs, that was the worst. My pulse pounding between the foam and my ear canal was so wild, so everywhere, so overwhelming. The doctor had said not to put earplugs in the ear that got hit but I tried it anyway. It hurt.

I found this old box, still tapped up. It had my white noise machine, the one Auntie Lan gave me when I used to study in the back room. Even that dull noise was too much. Finally I found those old headphones that Kyle loaned me, the noise cancelation-ones. That worked. I haven’t taken them off since, except to shower. I just sleep on my back now. No music, just constant noise cancelation. That has become my protection.

I slept the rest of that week, but that was still horrible. After the second night of waking up drenched in sweat I had to fold up my purple blanket and grey fuzzy comforter, the ones that Auntie Lan bought me when I moved out. I love those beddings but I just get too hot. Now I sleep with a sheet.

About two weeks after my injury I tried to work. Instacart was showing lots of orders and I just needed one more good day. As I logged into my account every command was so hard to do. I should have stopped there, but instead I picked a medium size order and walked over to Safeway.

Every step was like moving through mud, not just with my legs. I mean every item I reached for, every act of looking ahead, pushing the cart, everything was a colossal hurtle. I kept going, I couldn’t accept it, I thought it would get easier but I just got slower and slower. I had to double check each item, not because I forgot, but I got so nervous that I'd made a mistake. By the time I checked out I was exhausted. Then it hit me, I didn’t have a car.

Nancy saved me, again. She picked me up and delivered the order. I haven’t been out since, until today.

I stayed in bed, in a haze for days, curled up in my big purple blanket and grey comforter. At least I was safe. Nancy brought over Dominoes and I learned about mental rest from a website about concussions. Mental rest means do nothing. I guess it’s supposed to help but I was going nuts.

One night I took off my headphones and sat in the noise. The screech of cars, honking, people hollering, sounds from the street. I can focus on it like never before. The more I focus on the noise the clearer the build-up in me becomes. I can’t explain it, and I don’t like it, it’s like a build-up of uneasiness. It gets worse and worse and then I put my headphones back on, and it just washes away.

Eventually I moved to my favorite spot in the apartment, my little nook with the red table and my white chairs from back home. They inspired my red accent wall. I'd sit there every morning, watching the light coming in from the far window. Around noon when the light was strongest I'd open all the curtains and windows and let the noise from outside overload me, like a flood, but I learned to bear it.

One morning, waiting for any noise, I was in the silence when it hit me. The strangeness, the feeling in me, it’s not just because of the noise. It’s something else, something has changed. My mind is not my mind, or some part of my mind is not the same. The way it once was inside my head is different. It’s not me anymore.

I wasn’t trying to notice it, but just being in the silence, doing nothing, it became so obvious. Now every time I focus on it, it's clear as a bell. I am certain. My mind is not my mind and I don’t even know what that means.

Okay it’s been a month since my last entry, two months since the accident. Noise is still everywhere. It’s still hard to do anything. I can hardly write. If I text for five minutes I’m exhausted.

Nancy drove us to a free clinic with a neurologist. The entire drive was a rehearsal, going over how to explain what has happened. But that doctor had his own ‘personal diagnostic test’. It started with a bunch of questions about today’s date, who is the president? What city are we in? As he checked my ears he dropped three different three word lists. All easy stuff.

He asked other questions, like have you ever had a concussion. After three years of rugby and growing up playing ice hockey with my brothers, of course I’ve bumped my head, but it was never like this.

Anyways, he asked me if I could recall the words. Those three word lists. Since they fit into three totally different categories I grouped them accordingly. He nodded. It seemed like we were done. That’s when I started bawling right there in the exam room.

He didn’t even care what I had to say. He didn’t even care about how my mind is not my mind and about the noise. “Oh that’s interesting,” he said, “that sounds normal for a concussion,” he said. “Just give it more time.” He thought I should be happy that my memory works. My memory seems fine because it is fine. It’s always been fine. Then he asked “Honestly, are you sure there isn’t anything else bothering you? We can talk about it.” The way he said it, the way he looked at me. That’s when I knew, he had no idea what I was talking about. There’s no room for anything else because this is everything.

I got home and called Auntie Lan. I’ve been avoiding her calls but I needed to hear her sweet voice. I told her about the accident, about all that happened, and about what the doctor said. I told her about how my mind does not feel like my mind anymore.

“Then whose is it, honey? She giggled.

“It’s not like that.” I was crying again. “Of course it’s not someone else’s mind. It’s just not me.”

It was like a dream, or maybe a bad joke. A summons came from a law firm. Nancy took me to this office downtown. The decor was beautiful, all checks in dark wooden frames. Millions of dollars along the walls. I haven’t worked in almost five months. If not for the new Covid anti-eviction laws I'd be homeless.

Nancy summed it up best. “The market’s security cameras would have caught the plates of the truck that hit me. Since they neglected their security system they were afraid of being held accountable.” Makes sense, I guess. Anyway, they gave me a settlement. A check for $20,000. It’s blue and gold.

I don’t know what to do, but I have to do something. I can’t stay like this.