But fires tend to start small 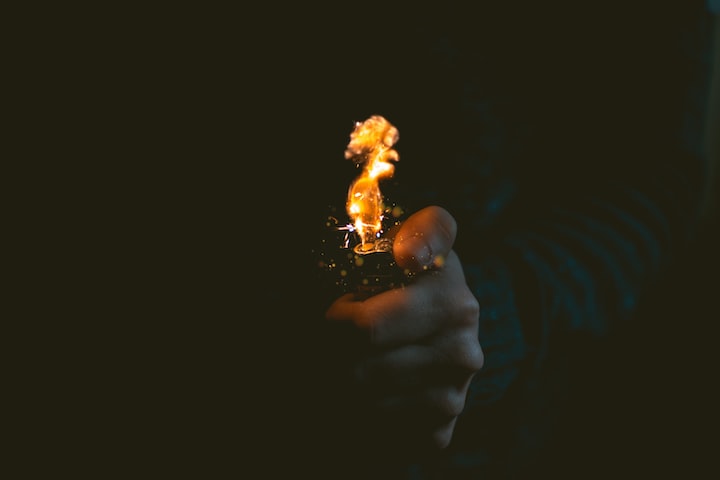 It’s early morning and mum and dad are asleep. I tiptoe from my bedroom down the long hallway and pause at the living room door. A light film of cigarette smoke hovers around the room, thickest just below the ceiling where it has gathered like a filthy cloud. I walk in and sit in front of the TV, switching the channel to the morning cartoons. There is shattered glass all over the linoleum floor in the dining room adjacent, and somehow also stuck to the roof. There are holes scattered around the walls too that would fit dad’s fist like a glove. Posters and smiling family portraits will be placed over the holes later today and eventually, someone will plaster them.

I try my best to focus on the cartoons but my eyes flicker back and forth to the dining room, counting the empty beer bottles.

Dad walks into the living room. He halts at the sight of me. He’s shocked to see me up so early. He says something about not being able to sleep, I think it was “Mum keeps stealing the blanket”. He leaves.

When mum wakes up sometime later, we drive halfway to Nan’s house before we catch up to him, walking along the roadside. I sit in the car while they yell at each other. He grabs her and pushes her to the ground. Later, mum picks the glass off the roof with a butter knife. Then lies on the kitchen floor and cries. I curl up beside her and tell her not to worry. I know we will be back together again in a few weeks once the holes in the walls have healed.

Not long after my eighth birthday, Mum and I move into an apartment block on the other side of town. A fresh start. Our apartment smells like wet carpet and permanent markers, and the neighbours stole mum’s car last week, again. Mum says it’s all we can afford, and I understand--most of the time. Today it is so hot though, and I just want to go back to the old house, back to the air conditioning.

Mum plonks a wet washer on top of my head, "go outside and run under the sprinkler with Brody”.

Mum’s best friend Mel is here, and they want to gossip. Reluctantly, I agree to leave them alone. Brody is my best friend, but he is two years older than me, so I don’t know if I am his.

I knock at Brody’s door, then we head into our shared apartment backyard. Our favourite game to play is Snake. We put the hose on high pressure and then let it go so that it flings itself into the air and sprays water around in every direction. The name of the game is that you have to dodge the snake and if you get bitten you lose.

“Ready!” I reply. The hose coughs a few times and then the snake jerks to life.

“Let ‘er rip!” Brody yells and I drop the hose screaming. The snake flies around thrashing and spraying water everywhere. Brody and I jump and twist, as the snake snaps at us. Water sprays me in the face and as I rub my eyes, Brody yells out. I open and see the snake winding up, ready to drop on top of me. But instead it falls to the ground, completely lifeless.

“Turn that bloody hose off you kids! It’s a waste of water!” The old lady with no teeth on the bottom floor turns the tap off and bee-lines back to her apartment. Brody and I stand still, catching our breath and letting reality come back to us.

“Come on.” Brody frowns and beckons me over to sit in the shade. I follow loyally.

“Guess what, my dad is getting a motorbike!” He grins, putting his arms out straight, leaning back against the brick wall and giving a few loud revs to his imaginary Harley Davidson. He has bruises all over his arms.

“I heard my mum say to Mel that your dad hit you.” It's not a question.

Brody keeps revving at his motorbike.

“Yeah, but he was drunk,” He glances at me for a second before turning his eyes back to his wheels. I nod.

“Anyway, do you want to play families or something?” He asks, “I’ll be the dad and I ride the fastest motorbike in world!”

“Okay, I’ll be the mum, but my name is Buffy and I hunt vampires.” Brody rolls his eyes at me, and we argue about whether I can be a vampire hunter in his game.

The first secret I keep from my mother is that I whisper swear words to myself when she gets out of the car to open the back gate. Then, I smile triumphantly from the back seat as if nothing happened.

The second secret I keep from my mother is that I made my little brother cry by calling him all the words I had heard my parents yell. Then, I frightened him into not telling on me.

The third secret I keep from my mother, I do it for Brody. I don’t tell her about that day. He shoved me against that brick wall and hit me until I agreed to play by his rules. To his credit, he played families pretty well, based on what we both knew.

At nineteen years of age, this is the first time I’ve seen dad cry. The door is ajar, and I can see him sitting in the dark at the dining room table. A burnt-out cigarette is hanging from his fingers; ash has fallen straight onto the table, but I don’t think he has noticed. His shoulders heave with jolting but silent sobs. It makes me angry. What does he have to cry about?

With a fire in my gut, I knew that if I left it would finally “give him something to cry about”.

When I finally stopped running, it felt like I had gravel in my throat every time I said his name.

There is nothing hanging over dry-wall holes in my own home, and I don't keep secrets. But there is a family portrait that stares back at me in the mirror now and then: Mum’s hair, a jumbled mix of a nose, my father’s eyes, and a carbon copy of his smile—One we never shared enough of—playing families.

Stories that have either been written over a bottle of wine

or while I should be doing my assignments.

More stories from JT and writers in Psyche and other communities.