Objects in Our Rear View Mirror

But it was long ago, and it was far away Oh, God it seems so very far. And if life is like a highway, Then the soul is just the car, And objects in the rear view mirror may appear closer than they are . . . - Lyrics by Meatloaf 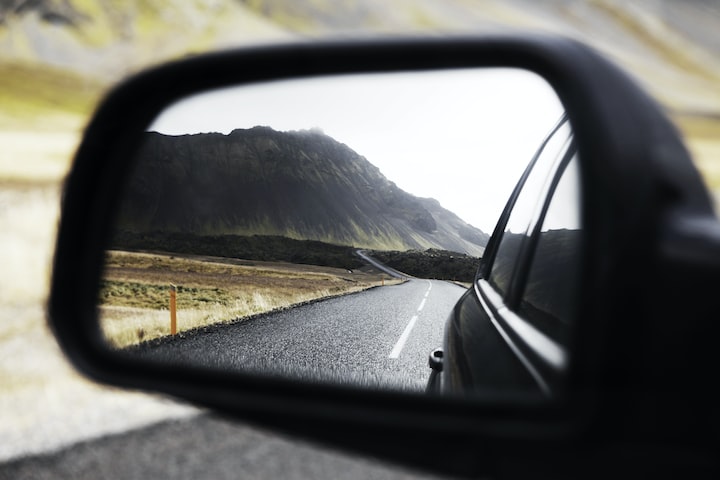 Photo by Kalle Kortelainen on Unsplash

The popular rock personality “Meatloaf” is by no means a trained psychologist. Nor is he a qualified researcher in the social science arena. He has not attended graduate school. He has no clinical experience. His message is poetic and anecdotal rather than based upon statistical and psychometric standards. He is simply a musician. And yet, his lyrics “Objects in the Rear-View Mirror” tell the tale of the profound effects of traumatic life experience, specifically including child abuse, on later, even much later, adult functioning even more poignantly than the finest and most current publications in the field. Simply put, he argues that one does not simply “get over it”, but rather carries the pain and confusion of early hurts down the road of life for a very long time. This is, of course, something survivors know instinctively.

Childhood is a time of rapid growth and development in the most basic and fundamental aspects of life. It is where the groundwork is laid for the formation of the adult personality. Logically then, a disruption at these critical stages would have profound effects throughout life. Dysfunctional actions cause dysfunctional reactions. When these reactions become incorporated as longstanding patterns of behavior in order to cope and adapt to a skewed reality, “normal” behavior is eclipsed. It has to be that way — for survival sake. Survivors of childhood abuse react to the world differently than “normal” people because they have come to know a much different world — one of insecurity, pain and fear — a world that makes their behavior logical and necessary.

It is generally agreed upon by practitioners from almost every theoretical orientation that in one form or another an individual develops basic and relatively pervasive assumptions about self, others, the environment and the future based upon messages incorporated and coping strategies learned in childhood.

Beginning with early Psychoanalytic thought, Freud clearly argued that adult psychopathology resulted from conflicts originating in childhood. He made constant reference to the significance of the child’s relationships with crucial figures in his/her environment.

Alfred Adler, in his formulations of Individual or Self Psychology, posited the relations within the family as the primary determinant of the lifestyle patterns adopted for adult functioning.

Erik Erikson constructed a developmental schema based on the resolution of fundamental self tasks, and further theorized that their unsuccessful resolution would lead to repeated dysfunction with regard to that specific issue.

Humanist Carl Rogers, who focused minimally on past experiences, acknowledged the contribution of parental conditions of worth in shaping one’s view of self and interpersonal relationships.

Even Behaviorists, including B. F. Skinner, account for the influence of early systems of reward and punishment as influential in directing later behavior.

Thus, it becomes clear that, regardless of the specific mechanism by which it occurs, the many aspects that together form a functioning adult are molded by the experiences of childhood. Following this, dysfunction or trauma in any one of the many areas of development would result in pathology in related areas of adult functioning because psychological defenses formed in childhood for survival become increasingly maladaptive in adult life. These maladaptive responses which have become so pervasive and innate take symptomatic forms that mimic psychiatric disorders.

In this way much misdiagnosis occurs as concepts of personality organization and development under ordinary circumstances are applied to victims without understanding the effects of extensive and long-term trauma on basic maturation and personality formation. These diagnoses do not take into consideration the true etiology of symptoms which once represented adaptive survival mechanism and later become maladaptive pathologies. This is the legacy of a child abuse survivor.

In the highly acclaimed recovery book, The Courage to Heal, authors Ellen Bass and Laura Davis recognize the long-term and pervasive effects of child abuse, stating, “It permeates everything: your sense of self, your intimate relationships, your sexuality, your parenting, your work, life, and even your sanity.”

Perhaps, however, the best indication, or “proof”, if you will, of the tragic effects of childhood abuse on adult functioning comes not from a clinical description of ensuing syndromes but, rather from the words of a survivor:

“People have said to me, “Why are you dragging this up now?” Why? WHY? Because it has controlled every facet of my life. It has damaged me in every possible way. It has destroyed everything in my life that has been of value. It has prevented me from having a comfortable emotional life. It’s prevented me from being able to love clearly. It took my children away from me. I haven’t been able to succeed in the world. I know that everything I don’t deal with now is one more burden I have to carry for the rest of my life. I don’t care if it happened 500 years ago! It’s influenced me all that time, and it does matter. It matters very much.”

How can it be that we continue to consider it a revolutionary theory that “Prolonged severe childhood abuse may play a vastly underestimated role in the development of many psychopathologies now ascribed to biological factors, intrapsychic conflicts or standard family-of-origin issues”.

Isn’t it obvious when we listen to those who have been there and survived to tell about it?

More stories from Donna L. Roberts, PhD (Psych Pstuff) and writers in Psyche and other communities.