by Sarah Porter 6 months ago in recovery

In a season of change, focusing internally can be just as important. 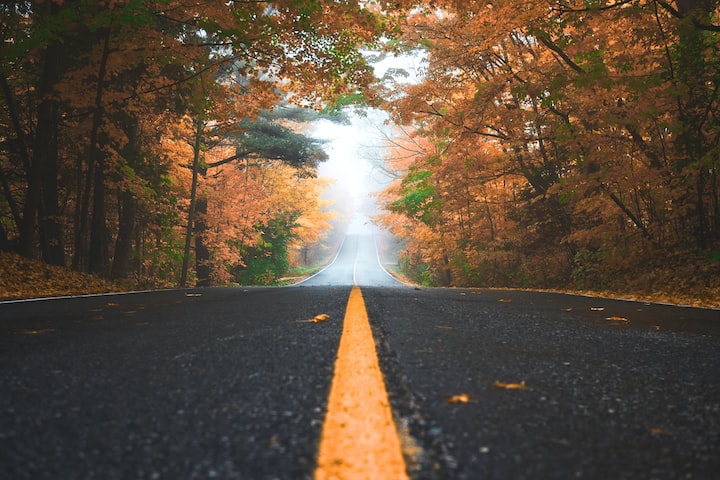 Photo by Patrick Tomasso on Unsplash

CW: Mentions of suicide, anger management issues. This piece was inspired by the Reedsy prompt "Start your story with the line, “By the time I stepped outside, the leaves were on fire.”

By the time I stepped outside, the leaves were on fire.

I had only caught glimpses of the upcoming equinox during my six month stay at the Cedar Crest Residential Treatment Center: nurses shaking off wet umbrellas in the lobby, my psychiatrist meeting me with fallen green leaves stuck to his shoes. With no windows— that would be a hazard to us, after all— in the facility, these small clues of autumn were the only evidence of this literal change of scenery.

My view, however, had not changed during my stay. The cream-colored walls of my treatment room were not designed to inspire or provoke feeling; rather, to remain a constant reminder of why I was there: stability. The most dramatic change I was subjected to was the daily shift from my fluorescent-lit room to the warm, comforting glow of the lamps in my psychiatrist's office.

You can imagine, then, the sensory overload I experienced when I finally left the hospital. Upon my admission, the overcast, dreary skies of late March were still hanging overhead. Now, the landscape was covered in a diverse, exploding assortment of crimson flaming leaves, each a reminder of the season’s teaching: change.

The world, it seemed, had continued to spin while mine had screeched to a halt.

It wasn't as if I were completely free; I was still required to attend daily group sessions and individual counseling twice a week. But privileges existed now that I hadn't had during my inpatient stay. I could dye my hair, go for walks, impulse buy on Amazon— normal things. Normal, everyday, not-locked-up things. While inpatient care at the treatment center was beneficial, enlightening, and most of all, necessary, the tactics required for the intense nature of this type of care weren’t exactly liberating.

My first follow-up appointment was scheduled for the afternoon of my release. It seemed to double as a reintegration into my normal life as well as a safeguard to ensure I didn’t do anything drastic in my first few hours of freedom. I didn’t mind, as it allowed me a brief reprieve from the introspection my treatment had focused on and granted me what I’d been without for the past six months— a distraction.

I settled into the bus stop bench outside the treatment center, my plastic shopping bag full of personal effects next to me. The windowed, turquoise shelter contrasted perfectly with the maroon and orange fallen leaves stuck to the clear glass. I sat there, marveling at their brilliance until my bus arrived.

“How does it feel to be out of Cedar Crest, Alexandria?”

I shifted on the couch, unable to determine whether this was some sort of trick question. “What do you mean?”

“Well, it has to be strange,” Dr. Carmine began, “to be out on your own again after so much time in treatment. Have you had any difficulty adjusting?"

Another trick question. “It’s… definitely different. I wouldn’t stay I’m struggling, but it’s taking a bit to get used to.” There, a diplomatic answer. Truthful, but not concerning enough to send me back to the inpatient facility.

Dr. Carmine nodded understandingly, as if she’d ever been in my position. “That’s completely fine. Nobody expects you to go back to your normal pattern of life right away.” She turned away to type something into my online record. “Regardless, I’m glad you’re doing better. Let’s go ahead and knock out some of the screening questions, okay?” I nodded. “In the past week, have you wished you were dead, or wished you could go to sleep and not wake up?”

“In the past week, have you had thoughts about killing yourself?”

“In the past week, have you felt that you or your family would be better off without you?”

“Good.” Dr. Carmine determined, and she began to type away at her keyboard once more. “Let’s talk about how you’re feeling some more. Are you still feeling angry?”

After my appointment, I stepped back outside into the blazing landscape of autumn. Dr. Carmine’s question continued to haunt me, despite my ability to dodge it during our session.

Was I still angry? Was I still an angry person? My hospitalization was a result of a whole variety of issues, but antagonism was at the forefront. I had spent six months solely dedicated to existing in that facility, and if that hadn’t fixed things, I don’t know what would.

Defeated, I slumped against the building and sank to the leaf-littered ground. Had I changed? You hear stories of people that spent their whole life knowing they were wrong, knowing full well that they caused people harm, and yet did nothing to adjust their actions or circumstances. Would I be one of those people, too indignant to change or too ignorant to notice? Should I have even been released?

I looked down at the fallen leaves that had attached themselves to my shoes. Reminders that the world had continued on, while I apparently had remained stagnant. People weren’t like leaves— they didn’t automatically change over time because nature told them to. It had to be a choice, a deliberate decision to adapt. I don’t know if I had ever made that call.

If I hadn’t, I was choosing to do so now. Pushing myself off the ground, I picked up my bag and headed towards the bus station.

The clean, neutral walls were a comfort now. I previously had considered them plain and uninspiring, but I now understood their true purpose. I wasn’t back in here to focus externally and on my release— it was to reflect on myself and focus on what I could change for my own sake.

The appearance of my treatment room didn’t matter. The décor of my psychiatrist’s office wasn’t important. The changing seasons outside of Cedar Crest Residential Treatment Center had no effect on me. Everything outside of my control would change, and I couldn’t affect that. But here, with no distractions from the outside world, I could focus on what was genuinely important— new growth from nothing.

See all posts by Sarah Porter →