My Own Giant Beanstalk

by Emma Louise about a month ago in family
Report Story 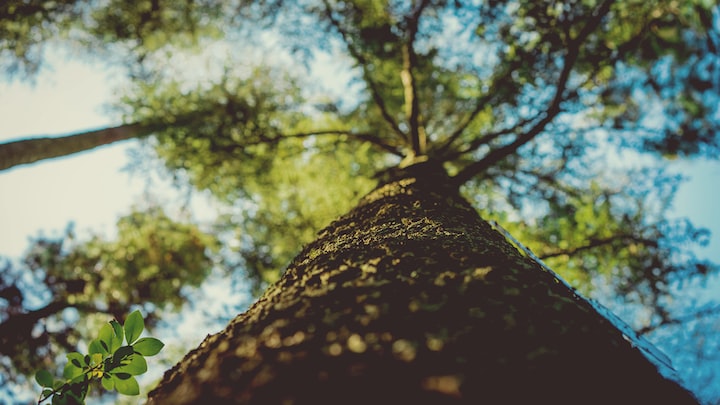 Photo by Irene Dávila on Unsplash

Jack’s mother, or someone similar, scattered some magic beans and one landed in the pit of my stomach - in my sacral space. The seed grew and thrived and blossomed over time. It’s roots grew down out of my root chakra and into my legs, it’s tendrils eventually emerging from the soles of my feet and continuing downward, down, down, down. Not into the soil of the earth but into THAT time. I am fixed in that moment in time. Stuck. It’s trunk replaced my trunk, filling me completely. It’s spiny branches have replaced my own arms and it grew out of my finger tips, which now tremble often when they didn't before. It’s branches climbed for the skies and filled my neck, head and the entirety of my brain. The synapses that once fired with jokes, memes, fun, laughter, joy and often laughed at times that were inappropriate have been replaced with the vibrating branches of fear, worry, anxiety, dread, horror, nervousness and terror.

My son had a seizure, then another. ‘They’ said it was “one of those things“ but I’m not really sure what that means. I use that phrase when describing gadgets, a thing, or new fads I saw in days gone by when I enjoyed life. I’d say, “Ooo, I need to pick up one of those things!” and I’d run back down the toiletries aisle and pick up a chap-stick, or I’d return back to the stationary aisle and throw a Hole Punch into my trolley because THEY are “one of those things”. It turned out ‘they’ were wrong because it happened again, and again. ‘They’ said he has epilepsy. Ohhhhhhhhh, i’ve said it now! That word! It wakes the Beanstalk with gale force winds and shakes every part of me. When strong winds blow in your face they push tears from your eyes, the same is true when gale force winds come from within your face. I vibrate, and tremble at the word. The funny thing is I am full of epilepsy. Yet, when I am frightened of saying the word.

Jack? If you are out there, waiting to chop down mighty beanstalks I don‘t actually want your help just yet. I’m pretty sure I need to stay right here. This beanstalk keeps me in a state of hyper-arousal which is essential. I keep my stairs vacuumed, wear a full set of pyjamas (instead of some mis-matched unsightly ones). I lay an outfit over the end of my bed and leave my shoes off the shoe rack and just behind the door so i’m ready. As soon as the monster who’s name is Tonic Clonic comes and eventually goes I can get myself dressed for the hospital. It’s hard for me to remember a time I was so nonchalant and simply went to bed - was I ever so carefree?!

‘They‘ have medicated my boy. I am grateful, incredibly so, but equally I find it hard to understand why, after all, he isn‘t … the E word. It must be something else! Is my God punishing me? Is it because I had Hyperemesis Gravidarum and I caused this with all my vomiting or the anti-emetics I reluctant but desperately took? I fell on the train platform when I was 5 months pregnant - did that slip cause this? Is it because he simply got too hot? Is it because of something I did or didn’t do?

I wake up from the cat naps I now call sleep at around 2am and stay awake until at least 3:30am. I wake again at 6am and stay awake and alert until 6:50am. I sit there bright eyed, ready, listening so intently incase that monster crept in through an open window at some point and hid under his bed - waiting until Tonic Clonic Time. Once these times have passed I wait until 8am, which is when he takes his morning pills. I wait until I hear him take them, I act relaxed and surprised when he says, “Morning, Mum. I‘ve just taken my meds” and I say, “Oh! Meds! Goodness, I forgot - good lad” or different variations of it. Then I wait until 7:30pm when he takes his evening meds and I say, “Oh Meds time again? Wow, Great, thanks for telling me”, what he doesn’t know is I have an alarm set for 7:59am, 8:01am, 7:29pm and 7:31pm. These remind me to listen for him pottering around near the cupboard where these pills are kept. Not that I need reminding, but I can‘t turn these alarms off. Absolutely not. The vibrations match the frightened fizz of my brain.

My optic nerves are thin spiny branches of my anxiety beanstalk and I see things differently now. I see other teens in the shops, or on television and I wonder if they have had seizures? Or if they’ll start having seizures? Or how they would BE if the Tonic Clonic Monster visited them? I see mothers in films and wonder how they would act if their teen went through this, or how they would act if they were the mother to my son? Or I see how relaxed they are with their teen - and I see that I am not. I look at items in grocery stores and wonder if they might be a trigger. I see the sun and remember my son has to avoid this now because the medication means he cannot expose his skin to the sun. I see our fluffy cats - which get locked downstairs each night - so I can open the front door ready for the paramedics. I hear music and wonder if it doesn’t activate some fizziness in his brain, I hear a storm and become frightened that the eletrical energy won’t welcome in the monster. I see lights flashing and pulsating quickly - like my heart rate - and I hope my boy doesn’t see them. My beanstalk is a parasite which has infected ALL of me.

Is there a Jack somewhere who can come and chop down this majestic beanstalk and release me? Not yet of course, but maybe one day. Am I in there? Is Emma locked in a tiny space vacuum sealed so minutely I can fit into a crack of this horrific dark trunk. I wonder if I‘ll expand when the seal is broken just like the duvets I ziplocked and sucked the air out of. Will I return to my old self and I’ll laugh at silly things, I’ll find the good in all I see, I’ll giggle far too often for a woman of my age and I’ll say “Hello” to passers-by even though they often look at me with shocked expressions because it isn’t really what Hampshire folk do but I do it because I’m a Northerner and it’s what Northerners do? Also, there’s a possibility I am no longer in there. What if this parasite consumed and destroyed me. What if Jack chops me down and I emerge tiny and trembling and I don’t swell to my former glory like that duvet. For now I think I need to stay exactly as I am. I’m not happy here, not at all, but I am ready in case you-know-who shows his ugly face..

To those who love me - thankyou for being patient with me. For those who knew me before - I am sorry I can’t meet up or go to the pub. For those I’ve met since this happened - Thank you for liking this infected version of me.

All of my stories are selected from the filing cabinets of my own brain, they’re all true.

Instead of juggling my emotions alone, i‘ve decided to share them with you.

More stories from Emma Louise and writers in Psyche and other communities.