Lost in the Wild

by Avery Cecil 10 months ago in trauma
Report Story 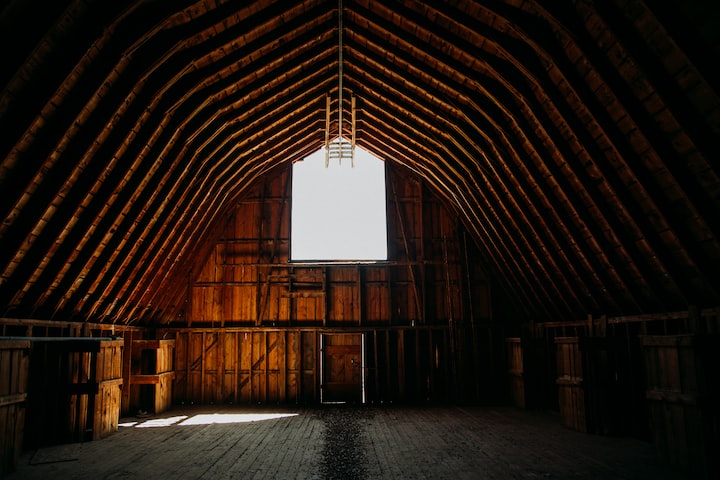 Photo by Conner Baker on Unsplash

She woke up softly, to the scent of sea salt, cow pies, and alfalfa. It was a distinct smell, one she had come to know well. A single ray of sunlight beamed brightly through the gnarled wooden planks and the gap between two of the old weathered boards. She grimaced as she rolled to her side, her hips sore from the solid ground she slept on. She slowly brushed some hay away from the edge of her dwelling to reveal a series of notches as she carved one more with a small jagged rock; 42.

Forty two days she had been in this place; she had lost track of the days of the week. She still fumbled through her memory hoping to recover what day it may be. She took a deep, ragged breath and sat upright.

This was a place where wild things grew, long blades of grass made their way through the cracks in the foundation. Mushrooms grew in one of the dank corners of the room. There were other small growths, insignificant in size or genus but they were the only other color in this place. Sometime last week a single wildflower, bright yellow and resilient sprouted at the edge of the room that faces the sea. Without sunlight it wilted and withered away as quickly as it had grown. She had weeped at the loss of it, it was her beacon of hope in a dark place. How unreasonable this would seem to anyone else; why such an insignificant death was so profound to her. She smiled to herself as she tucked her knees under her bottom and peered out of the gap in the planks. It was beautiful out, the sun was shining over the grassy plains, cattle grazing lazily by the seaside. She imagined herself at the shore, feet in the water, the feel of the hot sun beaming down on her face and shoulders. Forty two.

She knew today was the day, her least favorite day, the end of a week. She pushed it out of her mind and reveled in her fantasy of the sun and sea.

Some time later she heard soft footsteps, an unseasonable chill descended upon her as she felt the hair rise on her arms and the nape of her neck. She stared at the entryway and drew her knees to her chest as she awaited the arrival of the owner of the footsteps.

A figure appeared; tall, slender, face drawn and gaunt. In pointed silence, the woman crossed the threshold and set a bucket down before leaving to retrieve the stool. She set it in the middle of the room and nodded her head. The girl knew she was to get up and sit although it had never been spoken. She moved slowly, rising to her knees and then to her feet; she made her way to the stool. She knew not to sit, the woman would remove her clothes first, then she could sit.

With sure hands the woman removed her ragged gown and motioned for her to sit. She sat, hugging herself, clutching her arms around her nakedness as if it were the first time. The woman removed a sponge and a bar of soap from the bucket and began the tedious “wash”. She cleaned her thoroughly as always, the girl stared down at her feet watching the dirt streaked suds make their way down her legs to pool on the wooden floor. The woman washed her hair, her long skinny fingers probing to and fro along her scalp. She rinsed the soap off of her and dried her with a large cotton towel before placing a clean frock on her. Once dried and dressed she pulled an old comb from her pocket, the same as always, and brushed the tangles from her hair.

Today, the girl decided to ask, “why am I here” she whispered. The woman stopped combing, silently she put her hands on the girls shoulders. She didn’t expect an answer, forty two days and the woman hadn’t uttered a single word to her. “Please” she whispered, “I don’t understand”, her lip quivered and her eyes filled with hot tears. The woman walked around to face her, her dark eyes were sunken into the pallid skin of her face. “You’ve always known dear” she responded quietly before placing a cool hand on her cheek. The cold skin of her palm sent a jolt through her as if she had fallen into the icy waters down by the sea.

She tried to scream in shock but her lungs felt full and heavy, leaving her unable to utter a single word. Water began to fill the old barn, the woman slowly backed out of the room. Bewildered, the girl who could not scream ran for the door and she tripped, her foot was caught. She scrambled to find what was holding her back; she was chained to the floor. The water was rising quickly and panic took her. She desperately pulled at the restraint, the water rising to her waist and threatening to overtake her entirely. She began clawing at her ankle, her jagged nails digging into her skin as she tried to escape. The water was rising too fast and she couldn’t escape, she couldn’t breath, she couldn’t scream. The water came over her and she flailed wildly to keep her head above the surface. A hand appeared, she reached for it, relief close by as someone reached toward her.

Her hands were not found by his, rather he laced his fingers in her hair pushing her down. Her hands came to his in an attempt to pry his fingers away from her head, but her efforts proved to be futile. Her world was thrashing about her as she drew the breath that filled her lungs. Sputtering, gagging, choking under the water she grew heavy and then she became limp.

She woke up softly, to the scent of sea salt, cow pies, and alfalfa. She had lost track of how long she had been in this place.