by Obajuwon Israel 2 months ago in trauma
Report Story

How emotional abuse does damage 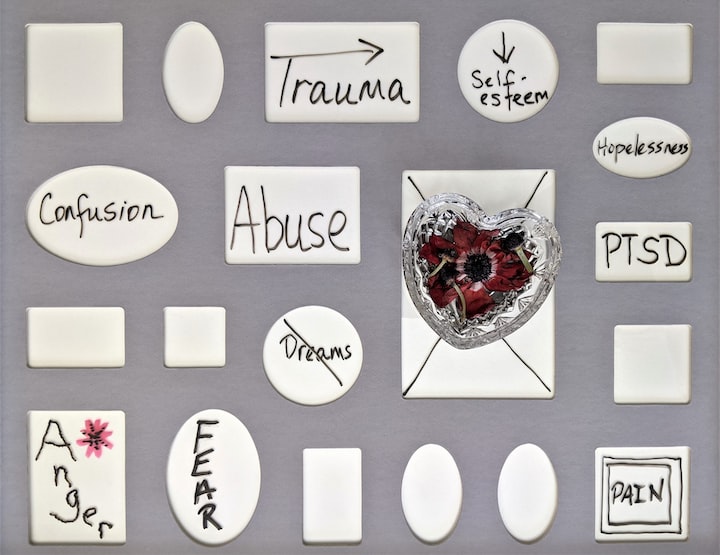 Photo by Susan Wilkinson on Unsplash

What Is Emotional Abuse?
When most people think of emotional abuse, they usually think of one or both partners belittling or criticizing the other. But emotional abuse is much more than verbal abuse. Emotional abuse can be defined as any nonphysical behavior that is designed to control,intimidate, subjugate, demean, punish, or isolate another person through the use of degradation, humiliation, or fear.
Emotionally abusive behavior ranges from verbal abuse (belittling, berating, constant criticism) to more subtle tactics like intimidation, manipulation, and refusal to be pleased. Here are some examples of emotional abuse in intimate relationships:
• Humiliation and degradation
• Discounting and negating
• Domination and control
• Judging and criticizing
• Accusing and blaming
• Trivial and unreasonable demands or expectations
• Emotional distancing and the “silent treatment”
• Isolation
Emotional abuse can also include more subtle forms of behavior
such as:
• Withholding of attention or affection
• Disapproving, dismissive, contemptuous, or condescending looks, comments, and behavior
• Sulking and pouting
• Projection and/or accusations
• Subtle threats of abandonment (either physical or emotional).
Emotional abuse is not only made up of negative behaviors but negative attitudes as well. Therefore, we need to include the word attitude in our definition of emotional abuse. A person who is emotionally abusive need not take any overt action whatsoever. All he or she needs to do is to exhibit an abusive attitude. Here are some examples:
Believing that others should do as you say
Not noticing how others feel
Not caring how others feel
Believing that everyone else is inferior to you
Believing that you are always right
So emotional abuse is any non physical behavior or attitude that is designed to control, intimidate, subjugate, demean, punish, or isolate another person. But there are also some types of physical behavior that can be considered emotional abuse. These behaviors have a name: symbolic violence. This includes intimidating behavior such as slamming doors, kicking a wall, throwing dishes, furniture, or other objects, driving recklessly while the victim is in the car, and destroying or threatening to destroy objects the victim values. Even milder forms of violence such as shaking a fist or finger at the victim, making threatening gestures or faces, or acting like he or she wants to kill the victim carry symbolic threats of violence.

How Emotional Abuse Does Damage
The primary effects of emotional abuse on the victim are depression, lack of motivation, confusion, difficulty concentrating or making decisions, low self-esteem, feelings of failure or worthlessness, feelings of hopelessness, self-blame, and self-destructiveness. Emotional abuse is like brainwashing in that it systematically wears away at the victim’s self-confidence, sense of self-worth, trust in his or her perceptions, and self-concept. Whether it is by constant berating and belittling, by intimidation, or under the guise of “guidance” or teaching, the results are similar. Eventually, the recipient loses all sense of self and all remnants of personal value.
Abused partners tend either to take on the criticism and rejection of their partner or to be in constant turmoil, wondering things like: Am I as bad as she makes me out to be, or is she just impossible to please? Should I stay in this relationship, or should I go? If I’m as incompetent as he says I am, maybe I can’t make it on my own. Maybe no one will ever love me again. Ultimately, given enough time, most victims of emotional abuse come not only to blame themselves for all the problems in the relationship but also to believe that they are inadequate, contemptuous, and even unlovable.
Emotional abuse is considered by many to be the most painful form of violence and the most detrimental to self-esteem. Emotional abuse cuts to the very core of a person, creating scars that may be longer lasting than physical ones. With emotional abuse, the insults, insinuations, criticism, and accusations slowly eat away at the victim’s self-esteem until he or she is incapable of judging a situation realistically. She may begin to believe that there is something wrong with her or even fear that she is losing her mind. She has become so beaten down emotionally that she blames herself for the abuse.
Emotional abuse poisons a relationship and infuses it with hostility, contempt, and hatred. No matter how much a couple once loved each other, once emotional abuse becomes a consistent aspect of the relationship, that love is overshadowed by fear, anger, guilt, and shame. Whether it is one or both partners who are being emotionally abusive, the relationship becomes increasingly more toxic as time goes by. In this polluted environment it is difficult for love not only to grow but to survive.
At the very least, emotional abuse causes both the abuser and the victim to lose sight of any redeeming qualities his or her partner once had. The more a partner is allowed to degrade, criticize, or dominate her partner, the less she will respect her partner. And the more a partner is emotionally abused, the more he will slowly build up an intense hatred toward his abuser. The disrespect and hatred each partner begins to feel leads to more and more emotional abuse and to each partner justifying inappropriate, even destructive, behavior. Over time, anger can build up on the part of both abuser and victim, and emotional abuse can turn to physical violence.
When emotional abuse is mutual, it becomes a matter of survival, as each partner has to constantly fend off the criticism, verbal attacks, or rejection and shore up enough strength to go on with daily tasks.As the emotional abuse takes its toll and each partner becomes less and less self-assured, each clings to the relationship even more. A destructive cycle is created—even as the relationship becomes more and more abusive each person becomes more dependent on his or her partner. And as the relationship continues to deteriorate, each partner feels further justified in becoming even more abusive.
Whether you suspect you are being emotionally abused, fear that you might be emotionally abusing your partner, or think that both you and your partner are emotionally abusing each other, this book will help you. If you are uncertain as to whether you are being emotionally abused, you will learn important information that will help you decide once and for all. If you fear that you might be emotionally abusing your partner, you will learn exactly what constitutes emotionally abusive behavior as well as what causes it. And if you think you and your partner are emotionally abusing each other, you’ll learn how to stop triggering one another, how to stop bringing out the worst in one another, and how to develop healthier ways of relating to each other.

More stories from Obajuwon Israel and writers in Psyche and other communities.