Did I Have an Online Chess Addiction?

by Alex Cooper about a year ago in addiction
Report Story

I had to check myself before I wrecked myself 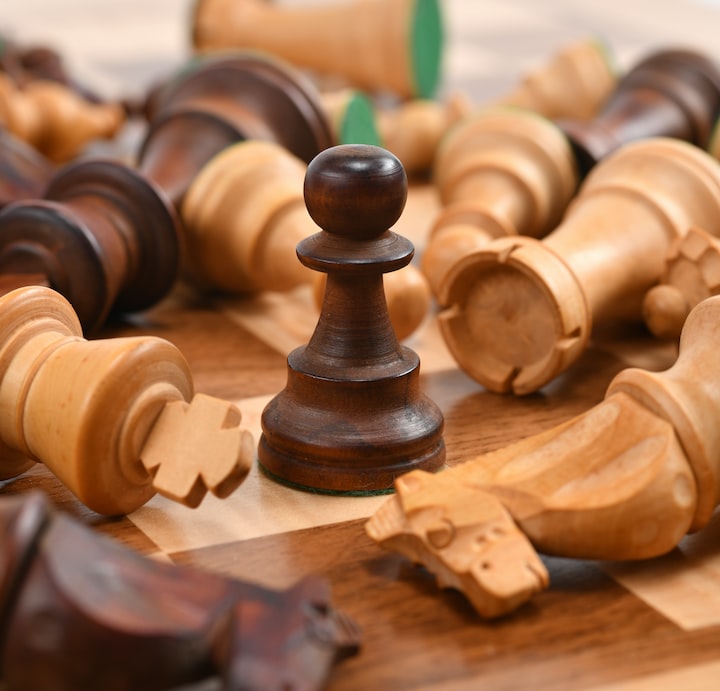 Recently, I fulfilled a modest ambition — reaching a rating of 1500 in online bullet chess in a little under a year.

But at what cost? My humanity.

OK, that’s a bit dramatic. But I closed my account on Chess.com, and I think it was for the best.

Online chess taught me a lot of things about myself — mostly that I’m an asshole, a hypocrite, and have the attention span of a hummingbird on crack. The only thing I became a Grandmaster in was procrastination.

Here’s a brief history of my descent into madness.

I started playing online chess back before The Queen’s Gambit made it cool.

I had little interest and had only played a handful of games as a kid, but I had interacted with a few chess enthusiasts (including a childhood friend of Magnus Carlsen) so Quora kept pushing chess content my way.

I figured I could do with an intellectually stimulating hobby, so I made an account on Chess.com. After watching a couple of YouTube videos on strategy, I was ready for the big leagues.

Around the time I started, COVID became ‘a thing’ and suddenly I was stuck inside all day with very little to do.

What else was I supposed to do? Work?

My online chess journey began with 10-minute games. Worryingly, my attention span seems to get worse the older I get — 30-minute games would have been torture, and don’t even get me started on one-move-per-day ‘daily chess.’

Even during 10-minute games I’d lose concentration and start flicking between tabs while waiting for my opponent. It didn’t take long for me to move down to five, and then three-minute games, AKA blitz chess.

My ‘study’ was very sparse, but I memorized the first few moves of at least a couple of openings. I learned one cool trick using the Queen’s Gambit as White, where I’d capture at least a minor piece with my queen and look like a genius. It only worked if the other player went along with it for about four moves, though, which happened maybe once every 20-30 games.

Despite my lack of interest in learning the game, I got very competitive. There’s something weirdly damaging to one’s pride in getting utterly dominated in a chess game.

And I couldn’t help but take it personally, especially when someone would keep putting me in check repeatedly. Opponents weren’t nice people on the other side of the world wanting a friendly game — they were evil antagonists actively trying to belittle me and destroy my confidence.

My ego wouldn’t allow me to close the laptop after getting called ‘noob’ one too many times by some 14-year-old in Nepal, so I persisted until I was at least vaguely competent.

I got good at recognizing other countries’ flags, too.

All Aboard the Bullet Train

I got up to a rating of about 1250 before I found even three-minute games too slow-paced for my liking. So I moved on to bullet chess—one minute per side.

I made decent progress initially, thanks mainly to good reflexes.

I noticed that a lot of tactics went out of the window at these lower time limits. My intricate Queen’s Gambit setup never worked, so I started using something more basic.

Many opponents had preset openings they tried to get out of the way as quickly as possible. Sometimes I’d try to exploit this with my bishop, attacking their queen (but also risking being taken) and hoping they’d move another piece before they realized what had happened.

Sometimes I’d protect the bishop with my knight before moving it there; sometimes I’d risk it all.

I won (and lost) a lot of games with this tactic. I’d always get irritated when my opponent failed to resign after losing their queen. Then again, I wouldn’t resign when I lost mine.

My French defense was rock solid in 10-minute chess, but in bullet chess, it would quickly devolve into the English chaos theory, a term I just made up which means: ‘if I don't know what I’m doing maybe my opponent won’t, either.’

My Rating Went Up, But I Got Worse

You might have noticed that playing a terrible move and hoping the opponent doesn’t stop to think how terrible it was isn’t a good strategy.

I only started those bishop shenanigans because I was sick of always losing my queen to the same move. “Never assume your opponent’s move will make sense” is a good rule of thumb.

Another good rule of thumb is “don’t think before moving any piece.” This is a solid tactic when you’ve been outplayed; sometimes sheer speed wins out over strategy. Moving a king back and forth requires fewer mental calculations than trying to win a game without stalemating.

I’d get furious when I outplayed someone for most of the game, only to lose on time when they started spamming completely nonsensical moves quickly.

But then I’d do the same thing myself in the next game. It mostly evens out.

Did I mention I’m a hypocrite?

Just a few games before I work.

That was a silly loss; I’ll play until I win one.

I’m on a winning streak; I’ll play until I lose.

If I did a bit of work, I’d reward myself. A few hundred words? A few more games.

I felt no joy in it. I vaguely wanted my rating to go up, but I wasn’t learning any new techniques. I’d churn out games like a zombie, not caring that my skill level had plateaued.

One day, with a 6-game win streak, I crashed through the 1500 barrier and soaked in the imaginary applause.

I peaked at 1524, which put me in the top 8% of Chess.com online bullet chess players. Not bad, I suppose, but not great compared to someone who actually studies the game seriously.

When my inevitable losing streak happened again, I had a moment of clarity.

I’d reached this completely arbitrary goal, and what had been the point? I wasn’t interested in dedicating time to learning and improving; I just wanted the instant gratification of winning.

Bullet chess meant I could have that winning feeling repeatedly, even if I lost just as often.

I’d started playing online chess to have some kind of intellectual hobby, but all I was doing was procrastinating. No matter how well I played, I’d just end up feeling guilty that I hadn’t been more productive.

So I closed my account. I’m never going to excel, and I don’t have a deep passion for the game — I just have a competitive nature and an addictive personality.

Do you know how long it would have taken me to write this article if I hadn’t recognized my online chess addiction and closed my account? Eight years.

Jokes aside, I wasted so much time absent-mindedly clicking onto the site and playing a match or 10 every time I couldn’t think of something to write.

It’s like my brain was on autopilot. Just like you train your fingers to type or play a guitar riff without thinking, I had trained my fingers to open my chess account and start a game before I knew what was happening.

There’s nothing stopping me from creating a new account and working my way back up, but even the small barrier of having to create an account and start from a low rating is enough of a deterrent.

It’s like having junk food. If it’s there in front of me, I’ll demolish it, but if not, I won’t buy it.

I figure I’m good enough to mildly impress anyone who’s studied no chess theory, or surprise family members who haven’t played me in 15 years. And that’s enough for me.

Procrastination hasn’t been defeated, but at least I’ve put it in check.

More stories from Alex Cooper and writers in Psyche and other communities.