Brainstorms II: the Fundamentals of Depression

by Laura Sotillos Elliott 7 months ago in depression

Okay, so I got a bit carried away in my first post, starting with something as specific as the implication of the immune system in depression. Maybe I should have started with something a bit more general, like the systems involved in depression that have been established for years, and then moved onto more current topics. So that’s what I’m sharing with you today! I hope it’s still interesting to all; at least it will give us a more stable grounding on what depression is caused by. Specifically, you’ll find three more traditional hypotheses that try to give some explanation to the root of depression.

The first hypothesis is called the monoamine hypothesis. It points to monoamines (one of the types of chemicals that neurons use to communicate with each other, which are generally called neurotransmitters), or rather to the reduction of monoamine levels in the brain, as the cause for depression. Monoamines include adrenaline and noradrenaline (the “fight or flight” hormones), and dopamine and serotonin (the “happy” hormones). Serotonin is at the center of the monoamine hypothesis. Scientists gathered, slightly by chance, that serotonin is somehow involved in depression, but the how is still unknown. How are we sure that serotonin plays a role in depression, then? The monoamine hypothesis arose when researchers found that several drugs targeted at other diseases, such as high blood pressure or tuberculosis, also improved depression symptoms. Later on, they discovered that these drugs modulated serotonin levels in the brain, and that these were linked to the depressive symptoms. If we go into a bit more detail, the relationship between serotonin and depression goes like this: patients with depression have lower levels of serotonin than the healthy population. If we artificially increase serotonin levels using, for example, a drug, the patient’s symptoms revert, at least partially. Seems pretty straight forward, right? I also got excited about this clear-cut answer when I first heard about it, but, unfortunately, it gets more complicated. For example, drugs targeted to increase serotonin levels take weeks to improve the patient’s symptoms. If serotonin was the only player in depression, drugs that act by rapidly increasing serotonin levels would cause practically immediate benefits, but this is not the case. And if this was the only reason for someone to have depression, there wouldn’t be so many treatment-resistant patients. Therefore, serotonin cannot be the only player in depression. Thus, researchers had to keep on looking.

The second hypothesis is the diathesis-stress hypothesis (diathesis simply means hereditary, or in other words, transmissible from parents to their children). If we translate this into approachable language, the name of the hypothesis stands for “hereditary stress susceptibility” hypothesis. Stressful events start the production of “stress chemicals” in the brain and “stress hormones” in our body that prepare us to fight or escape from a stressful situation. Stress, anxiety, and depression are actually very tightly linked. However, everyone has gone through stressful situations, but not everyone has developed depression. So what predisposes someone to get sick after stress? Many things: the type of stress, the duration of the stress, or a biological predisposition to react badly to stress can condition someone to develop depression. Why? Because if we are stressed too soon or for too long, the mechanisms employed to deactivate the stress system get out of control, and they cannot properly stop our stress response; this, in turn, may lead to changes in neurotransmitters, including serotonin and other monoamines. As we saw above, lower levels of monoamines can cause mental health issues, like depression.

The third hypothesis is a bit more general. It proposes that depression is actually a neurodevelopmental disease, which means that the foundations for the disease are established during the formation of the nervous system. The brain takes a long time to develop, and is in fact constantly evolving. But there are three major periods, which are called critical periods, in which the malleability of the brain and its development are at its highest, and this hypothesis supports the idea that the foundations for depression are established in at least one of these critical periods. However, this tells us little about what factors need to be present during those critical periods to lead someone to depression. The neurodevelopmental hypothesis needs the other two hypotheses we have talked about (and more) to explain itself. 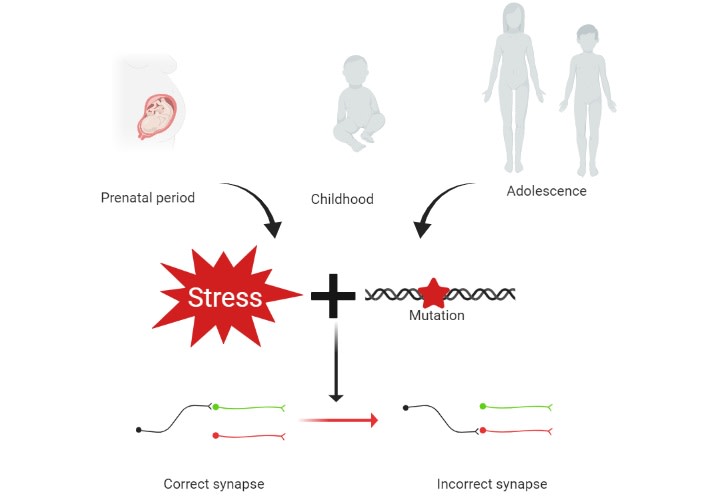 The incorrect connections formed when the combination of stress and mutations occur during the critical periods of brain development can promote the appearance of depression later in life. Graph created with bioRENDER.

Stress during the prenatal (before birth), childhood, or adolescence stages, the critical periods for brain development, can increase the chances of suffering from depression. When stress occurs at these ages in people that have a biological predisposition to depression, they might condition them to develop the disease later on. This is the case for certain versions of the BDNF gene, of which we talked in the last post, or certain serotonin-related genes. Add to this that serotonin is very important in the formation of the correct connections between neurons in the developing brain, and you have a very nice way to combine the first two hypotheses for depression (monoamines and stress) with the neurodevelopmental hypothesis. Basically, what this last hypothesis is saying is that when stress and certain versions of some genes combine early on in life, the nervous system develops with a pattern of neuronal connections that is faulty. Later in life, these faulty connections will manifest in the form of depression.

But hold on, there’s even more! Remember how the immune system was involved in depression at many levels? Well, lo and behold, microglia, the immune cells of the brain, are also important to create healthy neuronal connections during development.

Is this the whole story? No, probably not. As I said in my first post, depression is a complex disease, which means that there are many factors contributing a little bit to our risk of suffering depression. The combination could be different for different people, both in quantity (how many “defective” genes the person has, or how severe the stress the kid suffered was) and quality (what genes are “defective” or what type of stress it was). In fact we still don’t understand any of the factors completely; for example, we still don’t know why so many patients are resistant to the drugs that are available now to treat depression, or what to do to efficiently help them. That is why research is ongoing.

But there are also many things that we do know that we have still not covered here: sex differences, the influence of social media... Stay tuned to learn about all of this and more!