A reflection on this past year

by Grace Linn 3 months ago in selfcare 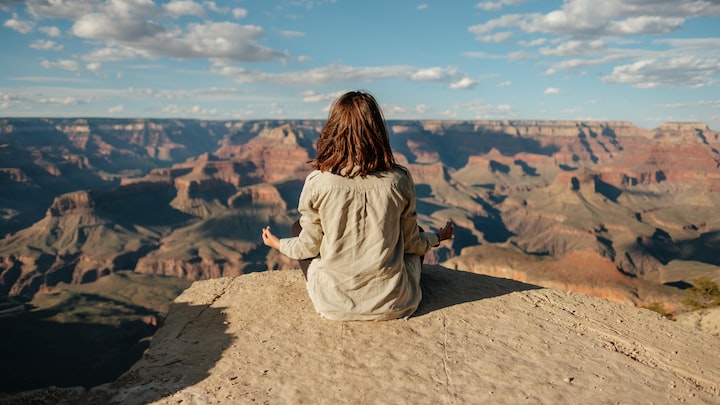 "You need to smile more."

That's what the 30-some year-old tall man said to me. He had short, red hair, and tattoos on the right side of his neck. He'd uttered the sentence with a condescending look too.

Of course, I am not the happy, prancing, delicate wallflower of a housewife that so many his age expect me to be. I don't walk around with a look of sheer joy on my face 24/7, ready to serve my spouse like a waiter at Texas Roadhouse, without a moment's notice.

I am 24, single, and carefree. I struggle with chronic anxiety and depression. Some days I have enough energy to run a marathon, and others I can't even get out of bed. Even on the good days, I can't control the invasive thoughts that perturb my mind. I've made strides in my mental and emotional states, but not without challenges along the way.

Why the hell do people expect us to be functioning at 100% all of the time?

That man didn't know anything about me, not even my name. He was someone I happened to be working near at this job, a book-printing plant. It was an "in-between" sort of job, meant to hold me over until I could find a more direct opportunity. It didn't make much money, nor was it close by, as my drive was 45 minutes one way.

I couldn't even afford to pay my bills with this job.

The pandemic had began to grip the nation, and the previous place I worked at was wearing down on my soul, to the point where every ounce of happiness from me was truly gone. I had no spark, no desire to do the things I enjoyed. Having put in two years of working there, I left with only an awkward phone call as my notice.

After the daunting task of job-hunting, a temp agency got me to the book plant. It wasn't the only in-between job I had, there were others I jumped back and forth from until February of 2020. I worked in a call center for two days and I did two weekend shifts at a warehouse. My feet were tired, but so was my mind. I was tired of switching so much.

Fortunately, I had a successful interview with the sealing systems company that employs me to this very day. I was elated, this was going to be my highest paying job, and it was located just three miles from home. It felt like my life could finally settle down.

It's funny how life works, isn't it?

Just as I was settling in to this new job, another blow was struck. My relationship of a year and a half was ending. It was my longest one, perhaps my most serious one as I lived with this person. He had become so engrained into my daily life that it was nearly impossible to purge him from my mind.

I was optimistic that we could cohabit the same space while I tried finding a new place, but alas it didn't work out like that. I ended up sleeping on my friends' loveseat for two straight weeks while we scrambled to find an apartment for all three of us. My stuff in the meantime I had to move to a storage unit as my ex had proven he couldn't be trusted to not touch it.

On top of this, the business at my employer was slowing down greatly. Every employee was mandated to take a week-long furlough. My money was low, the expenses were high, and I spent all of my free time on a loveseat I called home for two weeks.

We moved into the new apartment as soon as we could. It was a sweltering day in July, but at least the sun was out. Moving is a behemoth of a task, but I was grateful to live with friends and be able to sleep in my own bed. For the moment, everything seemed okay.

I faced every emotion on the spectrum while trying to heal over my breakup. And often to avoid dealing with that pain, I sought the attention of others. Mostly they were people who cared only about themselves, and often times I would be left in the cold, feeling heartbroken and alone.

I grew weary of feeling like I was losing every single battle. And unfortunately toxic person after toxic person took my mental state down the tubes. To a point where I was even admitted into a hospital.

Now, I know what you might be thinking. Looney bin. My three days spent in there tore apart that stigma. After hearing everyone else's stories, I realize that the people in there were all strong humans that were merely trying to cope with life that need an extra hand. No one was "crazy" or "far gone", like maybe the media has influenced you.

After I came home from my stay I vowed to get my mental health on track: and I really meant it. I enrolled in counseling and prescription medications, as well as journaling in order to really discover who I was inside. I began to declutter the gunk from my head that was weighing me down. I deleted toxic people from my life, and truly started to focus on myself.

Now this wasn't without hiccups either of course. A toxic relationship might have snuck its way in there. But I had enough strength to leave and keep my life on track. And that's what mattered most to me, was the ability to bounce back.

This journey of finding myself has lead me to wonderful things. I had heard of Vocal a couple years ago but never felt like looking into it. And after the name randomly popped into my head one day, I decided to finally create my account. My first story was about how I adopted my cat Delilah, and although it fell short of the minimum 600-word requirement, it was published anyway for being special content.

From there, I was finally able to put to paper the creative thoughts that struck my mind on a daily basis. I really fell in love with creating stories and knew that this was what I wanted to do for the rest of my life.

Another leg of that self-discovery journey was deciding it was time to leave the town I had lived in for the past 5 years. Fort Wayne, Indiana, the second-biggest city in the state. So many life-changing events had come my way as well as heartbreaks that I knew deep down it was time to leave this city behind.

I move in the next month to Ohio, in a smaller town that's about an hour away from Cincinnati. I am scared, but excited. I will live closer to my two best friends and will have a new lease on life. This is a frightening but necessary step to take in order for me to grow.

And because of this growth, I think of that man from over a year ago who told me "I need to smile more." I think of how much I have overcome, and how my confidence has skyrocketed since then. How I wish back then I would have said:

I will smile when I truly feel that way on the inside, and I don't work at this job to please you.

It isn't my job to satisfy anyone else's needs (especially if they are that ignorant). If I have learned anything this past year, it has been that first and foremost you need to take care of yourself. Not just your physical needs, but your emotional and mental ones as well. When you don't, you are not giving yourself a fair chance at a thriving life. It isn't fair to you.

And the breakthrough moment that begins it? Is truly feeling like you deserve better. Not that fancy chauvinistic bravado attitude, but an inner feeling of confidence that makes you feel like you deserve from the world what you are giving it.

The best thing you can do for yourself, is take care of yourself, inside and out.

Receive stories by Grace Linn in your feed
Grace Linn
Read next: My Story