If like me during lockdown, you became a stay-at-home mixologist, then you are probably looking for new ways to shake up this weekend’s cocktail night. 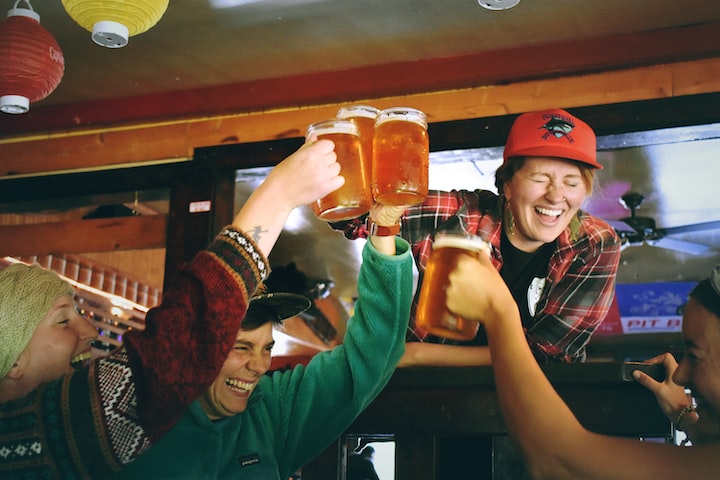 Photo by Drew Farwell on Unsplash

As an international flight attendant, I flew with flight attendants from 140 different countries and the one thing we (almost) all bonded over while gossiping in the galley was drinking. I asked a handful of my non-American friends what their favorite drinks from home were and put together a short guide for you to get inspired by. From homemade liqueur with granny’s garden blackberries to vodka bottles containing grass blades, I guarantee you’ll learn something from this list and find a new favorite drink.

Licor Beirão is a sweet alcoholic treat that was originally made in the 19th century to cure stomach pain. Now it is Portugal’s favorite spirit and can be served in many different cocktails or simply on the rocks with a slice of lemon. Vinho Do Porto or Port Wine is a sweet, rich, fortified wine. It usually has flavors of berry, caramel, and cinnamon in it and pairs well with richly flavored cheeses, caramel and chocolate desserts, and sweet smoked meats, such as barbecue. While port may taste like a delicious red wine I highly recommend going slow with it and not drinking the entire bottle in one night.

“Berliner Kindl” translates to “child of Berlin.” This is a sour, cloudy, wheat beer that was created in 1872 and remains the number one beer in Germany today.

Named after its iconic mountain, Kilimanjaro beer is a pale lager, and like most beers tastes best when ice cold. It is Tanzania’s most sold beer to both locals and tourists and is my personal favorite, along with Serengeti. I recommend having a Killi on a hot day while enjoying the outdoors, at a picnic, or relaxed hike.

Arak is a traditional Middle Eastern alcoholic beverage that is served with water and ice. When mixed with water it turns white and is known as “The Milk of Lions.” It is specifically made with grapes in Lebanon, and you would typically drink it with a Mezze platter.

Żubrówka is a flavored vodka liqueur made with bison grass from the Białowieża Forest in Poland. Each bottle has a single blade of bison grass in it. Because of the bison grass, Żubrówka was actually banned in the U.S. for years because it contains coumarin, a moderately toxic chemical that occurs naturally in bison grass. However, in 2005 developed a formula without coumarin so that it could sell Żubrówka to the U.S.

Bajtra, also known as prickly pear liqueur is a syrupy liqueur made out of cactus. I recommend it mixed with either prosecco or Campari.

Pisco is a high-proof brandy made in Peru from distilled grapes. I recommend making a Pisco Sour, which consists of lemon juice, simple syrup, and an egg white. Chicha de Jora is an Inca beer made from a specific type of corn fermented. Anis Najar is a very high-proof licorice liqueur that is similar to absinthe (drink if you have a strong stomach).

I started asking my fellow flight attendants and passengers from other countries what drinks were special from their home country when I was deciding how to stock my home bar in my new apartment back home in the U.S. I absolutely love it when a friend would visit their home country and bring me back a bottle of the traditional alcohol from their village thousands of miles away and it would taste like something I had never had and have a whole story behind it. Besides being a great conversation starter, it’s a fun way to bring back travel memories or feel like you’re experiencing something new - even if you’re on your couch in your pajama onesie on a Wednesday night.

The Czech Republic has the highest beer consumption per capita globally with beer being cheaper than water! Pilsner Urquell is the first Pilsner created and Slivovice is a plum brandy made as a way to deal with an excess of plums.

Lambanóg is a liquor made from coconut palm sap, it is also a wine. It is a slightly sweet spirit and is usually taken as shots. Think of it as your Filipino moonshine.

When I asked my Brazilian friend to explain the drinks she said, “the positive side is that the last ones are strong and very cheap. The negative: you may wake up on a random sidewalk on the streets the next day with a caramel dog licking your face.” Moving in a different direction, the drink Catuaba is named after the herb which is known in Brazil as an aphrodisiac. This along with guarana, a caffeine-rich Brazilian plant, are infused into red wine to make the drink. So, if you have a date coming up...

Guinness is a dry, Irish stout with a coffee-like flavor. Although easy to find in the U.S., it is a well-known fact that Guinness tastes better in Ireland. Baileys is a popular, sweet Irish cream liqueur. Jameson is the most sold Irish whiskey brand in the world. Mix the three and you get an “Irish car bomb,” a fun drink to make with friends, you have to chug it before the Baileys curdles.

Pretend you are on vacation in Bali with an ice-cold Bintang or a glass of Anggur Merah. Anggur Mera, also called “Amer” is made from kolesom wine and was actually created to be used as medicine. It is sweet and refreshing, however, it is deceptively strong and I guarantee you will feel the effects after one glass.

I saved the best for last, my personal favorite drink on this list is Rakija. Rakija is a fruit brandy usually made at home, although it can be bought at bars and stores. The most popular flavors are honey, cherry, plum, apricot, and pear. You will find Rakija in almost every home in the Balkans, and it is appropriate to drink it at any time. It is usually drunk as a shot and always with cheers, “Živjeli!” pronounced “Ji-vo-li.”

I hope you give at least one of these a try and the next time you meet with a friend who has come back from traveling, ask what they drank - it may end up being your new go-to drink, enjoy!