by Aunidan Christi KPGS about a year ago in art

The mural street artists, or artists who did all the murals and pieces of street art in and around Commercial Court, Belfast, Northern Ireland are excellent artists, especially when it comes to painting Northern Irish and Celebrities from the Republic of Ireland, though I will let you figure out who the celebs are.

Big Brother is watching you. 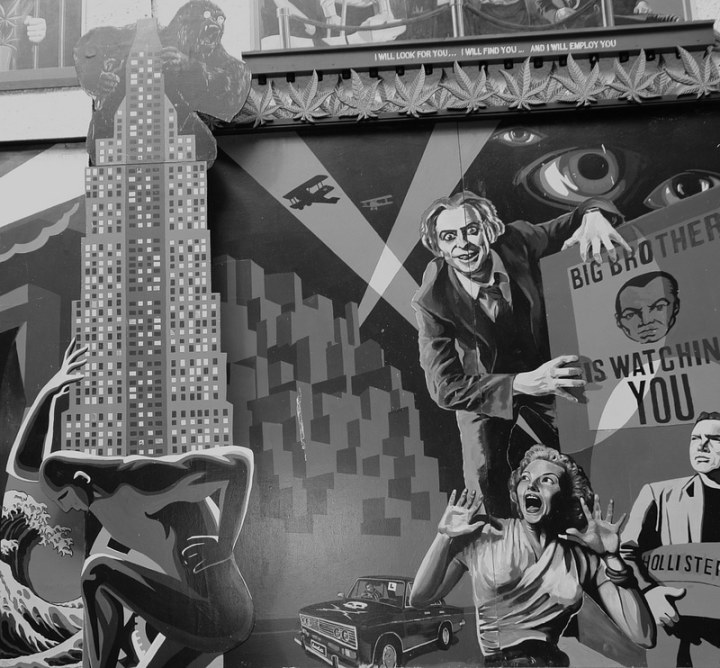 The artwork always captures my eyes and imagination, and at times the mural or piece of street art looks better in black and white, possibly because of the period in which it is set. 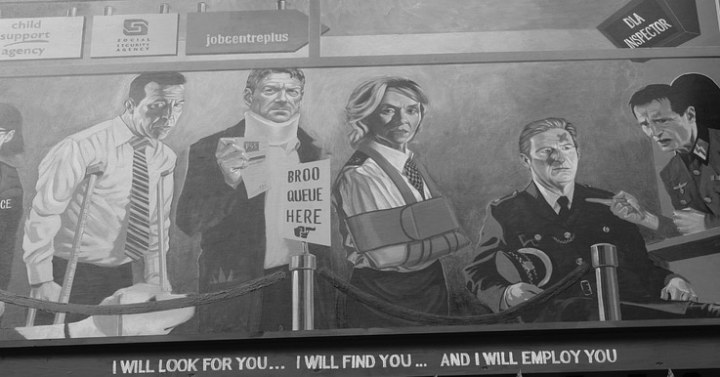 There is always a bit on Northern Irish humour in the street art I photograph, and this mural and piece of Belfast street art is no different. 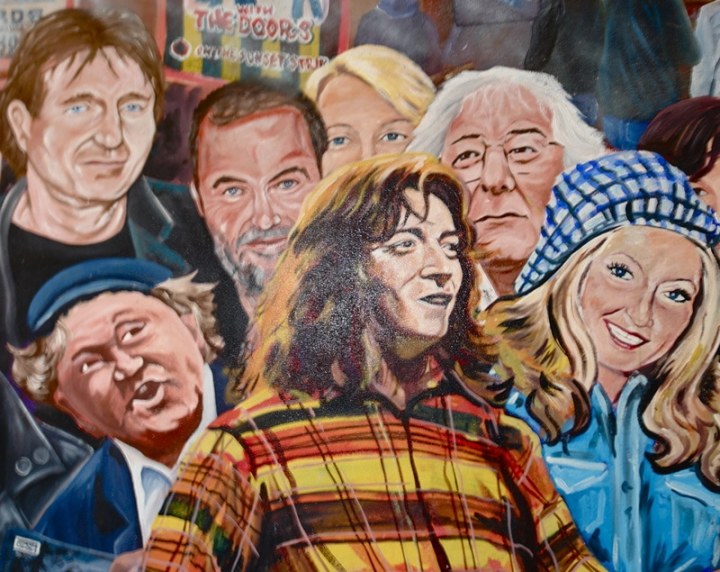 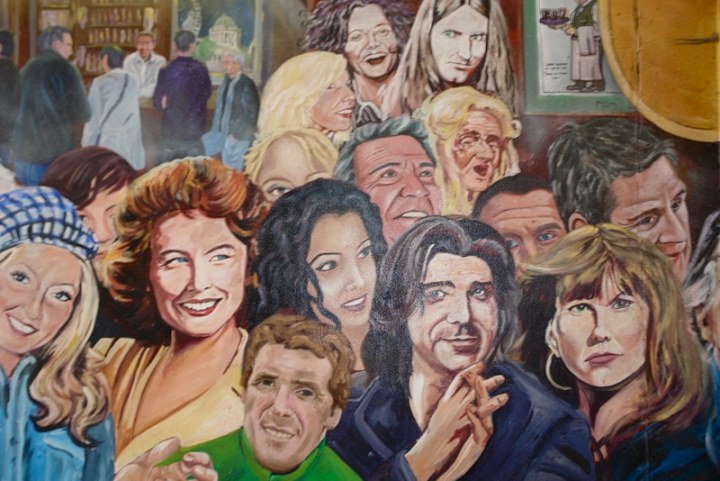 I wonder, how many of the above can you recognize and name? 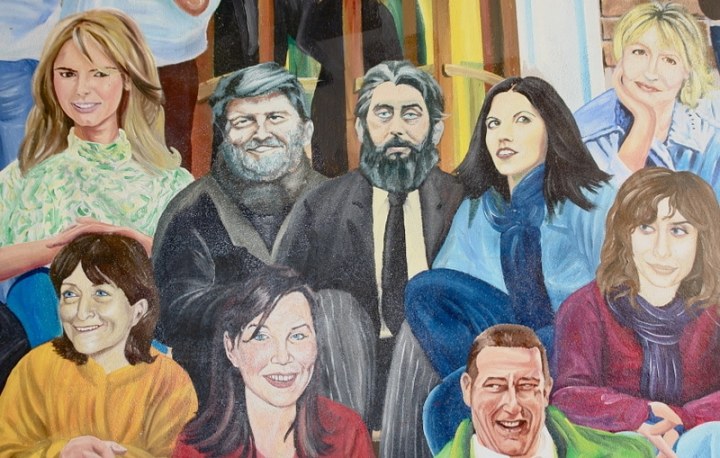 Who do you know?

The mural and street artists are truly talented souls and capture the famous as well as the common man and woman perfectly, and it is an honour to photograph and record their beautiful art work, which I love doing, and have done over the years. 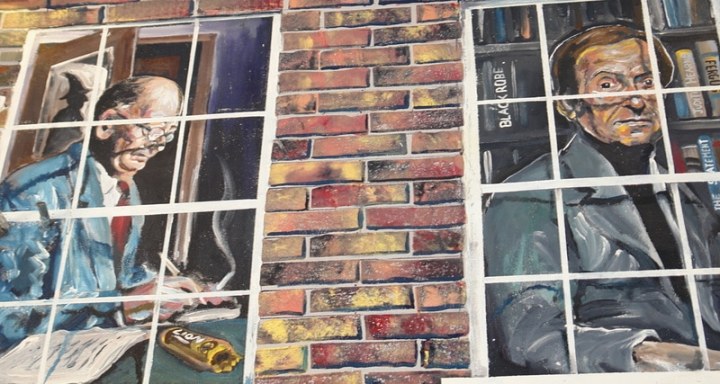 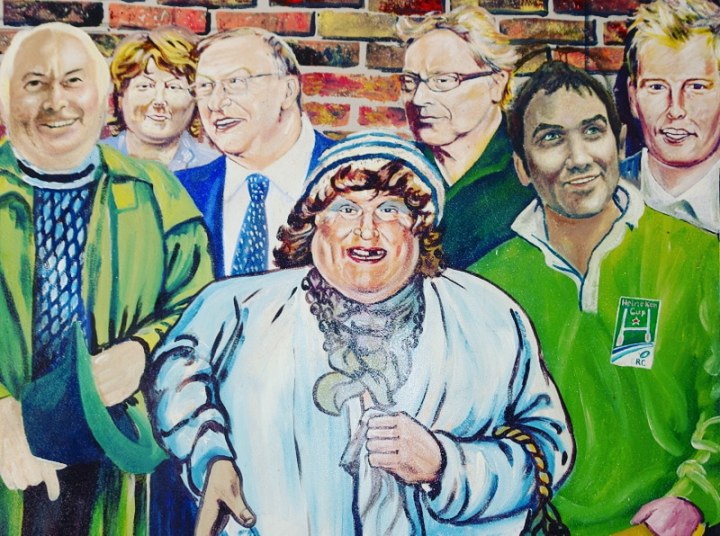 I also love the vivid colours within the art work, regardless if it is a mural or piece of street art. 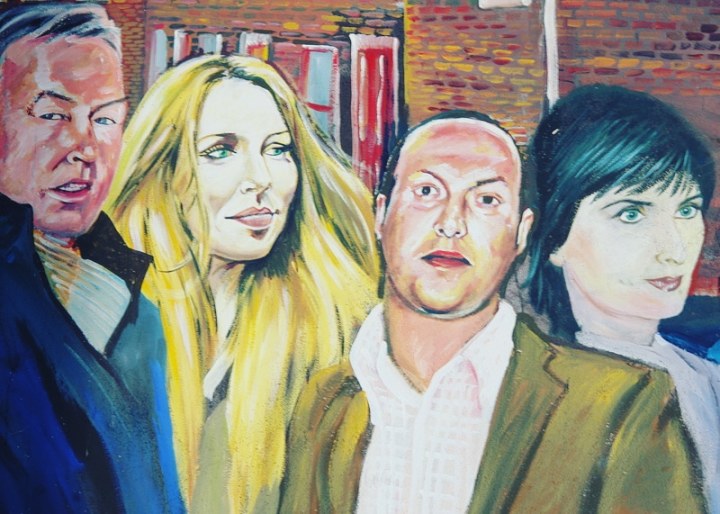 I have to admit some of the faces are familiar to me, but I am at a loss to some of their names. 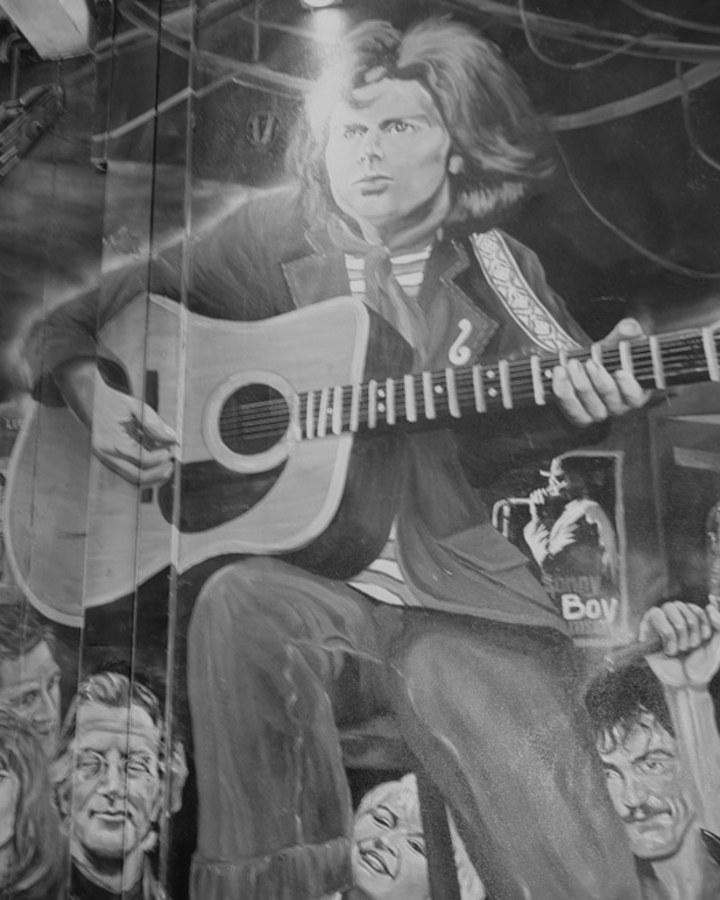 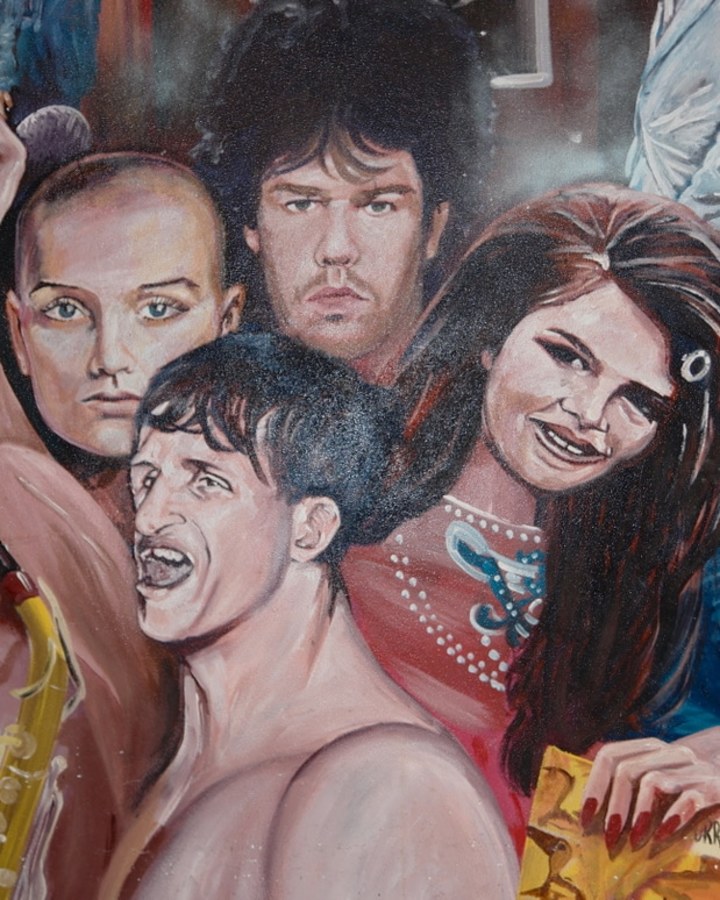 How many famous faces have you recognized so far, and how many of their names do you know? 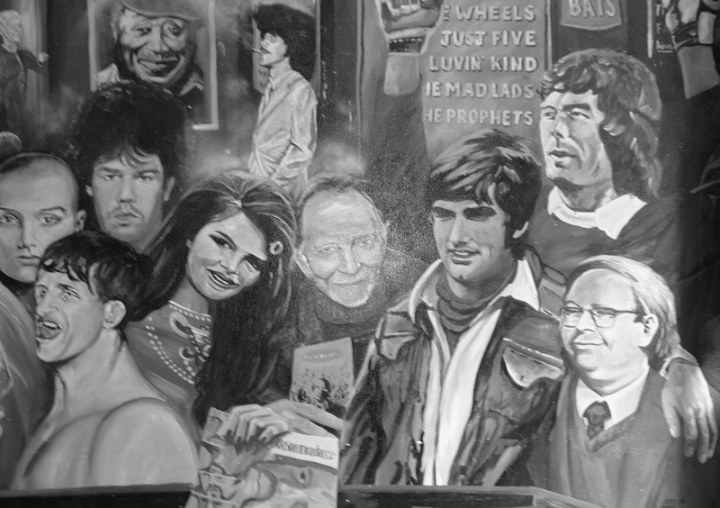 Plenty of familiar faces above—see how many you can recognize and name as you look over my photograph. 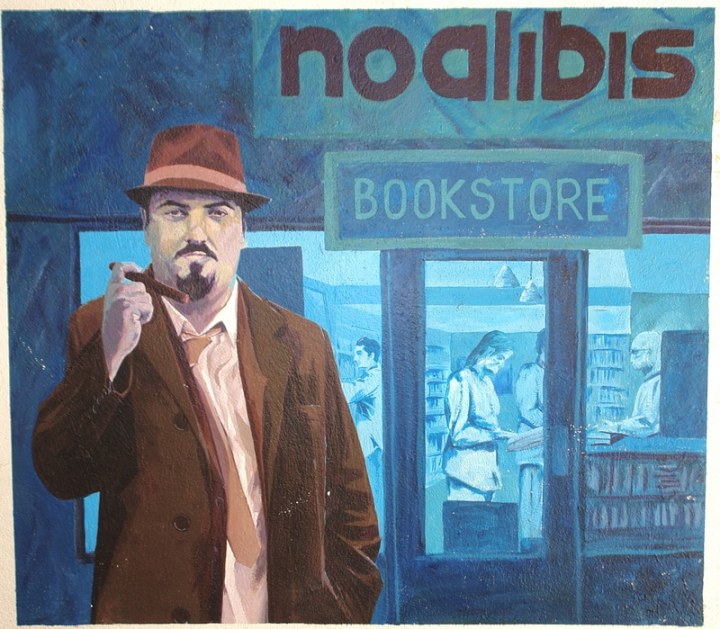 As I have already written before, some murals and pieces of street art, even though excellent pieces of artwork, baffle me, and it seems the only ones who know their true meaning are the artists and possibly the ones who employ the mural and street artists. 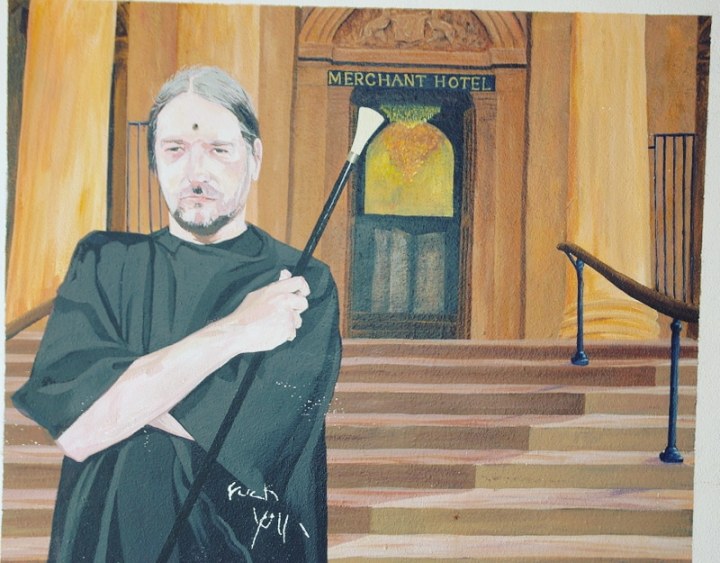 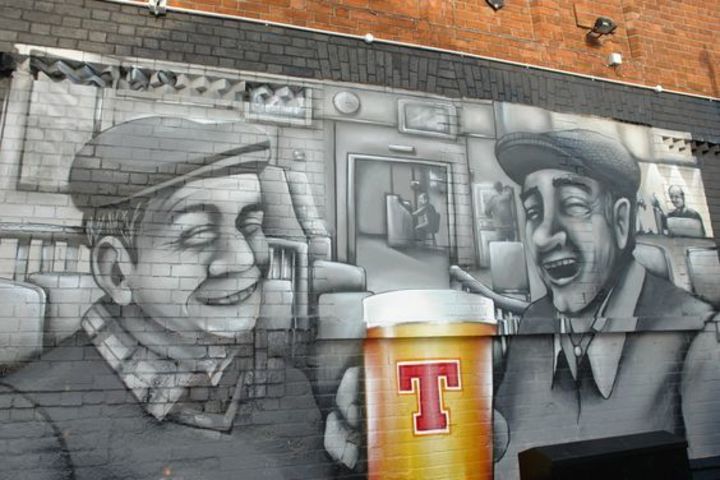 One of the main lagers in Northern Ireland is Tennents, the golden lager drunk by many in the Provence.

I like this photograph because of its black, white, and grey background and the bright colours of the pint of tennent one of the old fellas is holding, which is another mural and piece of street art which advertises a product from Northern Ireland perfectly. 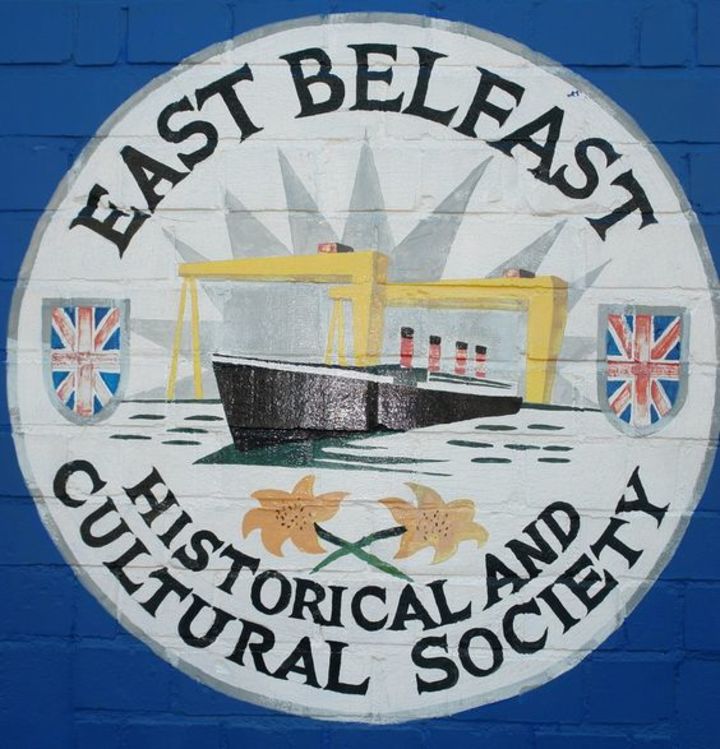 The historical and cultural society of Northern Ireland keeps alive the likes of the history of the Titanic along with other important historical creations and places. 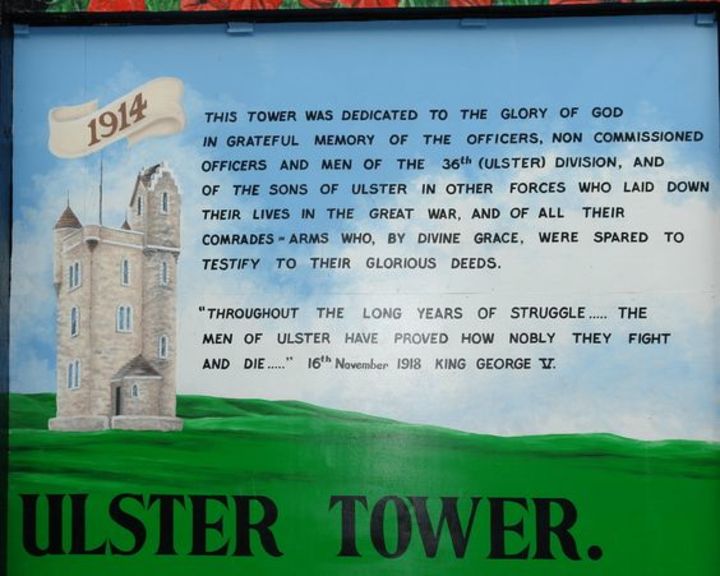 The Ulster Tower stands on the front line of the German side at the Battle of the Somme.

It was built on the site of the Schwaben Redoubt, which was a fortified position which the Ulster Division captured from their German enemy.

The Ulster Tower was one of the first memorials built to honour the Ulster Division from the First World War, who were made up by men from Northern Ireland and the Republic of Ireland who joined forces with their Northern Irish fighting brothers.

If you like my stories and photographs and can afford it, please leave a tip towards reaching my goal of becoming a professional writer and to further my photographic projects, and to those who have already tipped me and have read my stories, I thank you so much.

I am the Author of "The Spiritual Truth, a Guide into all Truth by Aunidan Christi," available on Amazon.com

A Child of Wisdom, StoryTeller, Poet and Photographer.

"And Wisdom is vindicated by Her children."