by Jamie Jackson 2 months ago in self help

Hear my existential cry for help and the salvation of routine 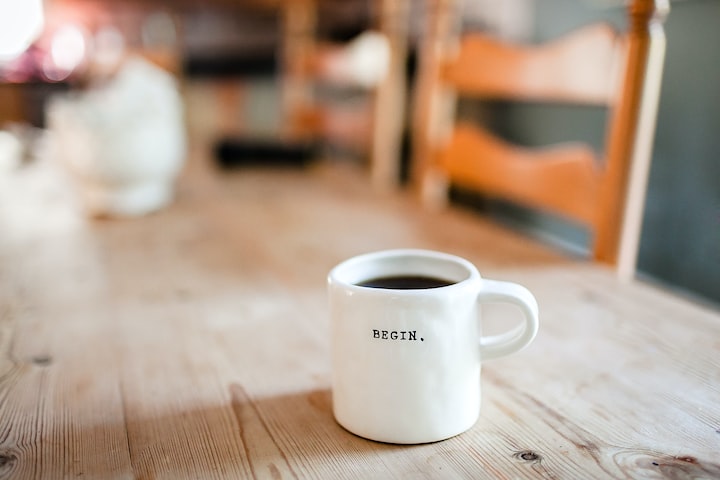 Photo by Danielle MacInnes on Unsplash

I've heard it all before; win the day, conquer the day, make the day my bitch like I'm a prison Daddy and the day is a weaker inmate I can exploit to improve my own standing.

Break the legs of the day whilst shouting "Where's my fucking productivity?" over and over, to send out to a message to all the other days that I'm not to be messed with.

Create a small manufacturing company and open a sweatshop in an impoverished day area where the collective day community has no other option but to work for me, as I pay them terrible wages, erode their working rights and undermining health and safety legislation putting all of them at risk in the workplace.

I get it. It's hardly an original thought.

Yet for me, the concept of conquering the day was exactly that, a concept, because I've never had to think about it. Until recently, my routine has been dictated to me, via school, university and work.

All I needed to worry about was finding the gaps in that enforced routine to work on my personal projects. I pictured a utopia where I was paid not to work, where I was unburdened by work and could pursue my creative dreams forevermore.

Then along came the coronavirus.

Then my routine became looser, as I worked from home.

Then I got furloughed, I had no work at all and my routine disappeared altogether.

For the first time, I was faced with an ocean of unstructured time. Welcome to utopia. Be careful what you wish for.

After eight weeks adrift in these clear blue waters, I have learned one thing, if I don't set out to conquer the day, it conquers me. In fact, "conquer'" makes it sound like a short land campaign, followed by occupation and a swift changing of flags. In reality, the day doesn't just conquer me, it destroys my spirit, wholly. It burns down my churches and cathedrals, it rips up my history books, it pulls down my statues and it kills my population. The day destroys everything and leaves me as an empty shell. Until tomorrow, that is, when it all starts over again.

Why is it that that the more time we have, the less seems to get done?

Mornings disappear like icicles in the daylight, slipping through my fingers and dampening my hands as my wife says to me "Can you walk the dog before dinner?" as the sun lowers in the sky.

But I haven't done anything yet, I think.

What no-one explains about endless, unstructured days, is that whilst you don't get anything done, you also feel like shit.

There's an odd sense of unease and restlessness that accompanies me, as I potter around the house, always busy but never getting anything done. It is a slow war of attrition on my self-esteem. What should be a glorious respite in my life is turning into gnawing guilt.

In theory, being a grown adult who understands and believes in Jocko Wilink's mantra Discipline Equals Freedom so strongly that I literally own the t-shirt, I should be able to organise my day.

But in theory, there is no difference between theory and practice.

I'm currently reading 'How to Be an Artist' by Jerry Saltz and in it, listed as rule 13, he says:

"Start working when you get up. Or as soon as possible thereafter. If you can get into it within the first two hours of the day, that should be enough to get round those pesky demons of daily life. Four hours is too long; those demons will take you down."

In the last few weeks, it has become a battle. I have to picture all those weird things I listed at the beginning of the article if I want to get anything done.

What's worse, what is more humiliating, is that my step-sons are up at 7am and working on their school work (funnelled to them through email and school apps as they too are affected by the coronavirus), and I'm still lounging around at 3pm, taking a week to write an article and promising myself I'll get going tomorrow.

So something has to change.

Today is Monday. I got up before 9am, I made my son breakfast, I went outside in the cool air and wrote my 'morning pages' as instructed by Julia Cameron, I then went and had a cold shower as instructed by Wim Hof, and now I am at the kitchen table writing this goddamn article because something is going to come from this day, even if I have to fight tooth and nail for it.

You might be reading this, envious at my time off, and think you wouldn't squander time so frivolously, but I can assure you, you would. I'm motivated, I'm driven, I work out every day, cold shower, stretch, endlessly think about what I should be doing, but I'm also something else: Scared.

Those demons that Saltz refers to is the same "resistance" Steven Pressfield writes about. In the War of Art he says:

"The most important thing about art is to work. Nothing else matters except sitting down every day and trying."

This free time has made me realise that I need a structure not because I'm lazy, but because it forces me to work.

My corporate responsibilities meant I was up early, it meant I was huddled over my phone in a toilet cubicle writing every day, hiding from my desk as a form of artistic rebellion. Most of my past articles were written that way. My old routine made sense, like a packed suitcase where I could fit my creative endeavours in around the sides, like balled-up socks.

Now I am starring at a giant, empty suitcase. I have no corporate boot print on my back, and foolishly, my artistic spirit is no longer in fight mode. As it lazes in its newfound freedom, it atrophies in the sun, and I have to face the fears of creativity under my own motivation. Each day I shy away from this challenge, and another 24 hours are wasted. Time is ticking, time is lost, and the demons, the resistance win again.

Today marks the start of a new fight. Not one against an external hand, but against the resistance within me. Against the day that gallops forth like a wild horse. It is for me to grab the reigns and control it, to break its spirit, not the other waty around.

There is a war of art, Pressfield was right, but it wasn't until recently that realised it isn't just a metaphor.

See all posts by Jamie Jackson →