To Be or Not To Be

by Adrienne Huggins 2 months ago in happiness 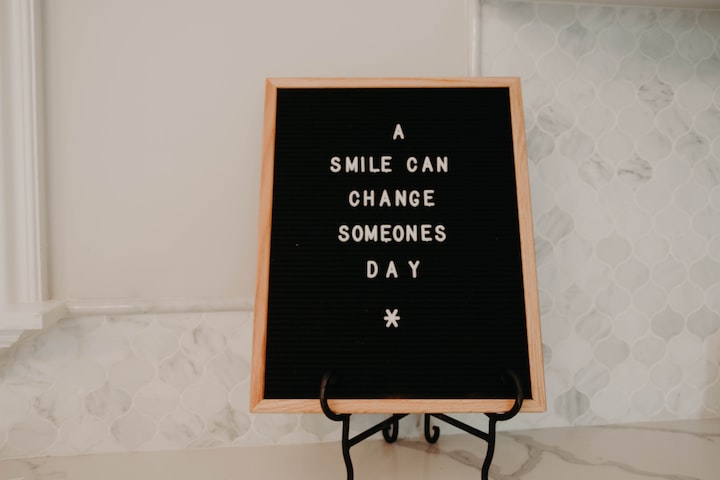 A 79-year-old man, living in a village consisting of about forty people, was always unhappy. He had been searching for happiness his entire life, and having not found it, he was a grumpy old man, and no one wanted to be in his presence.

The loneliness he faced each day was beginning to make him even more unhappy, since now he didn't have any friends, and all of his family had passed away. He became increasingly angry and sad, always frowning, and never having a kind word to say.

People in the village had begun to avoid him, worried that his negativity would somehow rub off and fearing that they, too, would become unhappy. Being in the old man's presence meant that people had to walk on egg shells in order that a scene not be stirred about.

Those with children made sure to keep their children as far away from the man as possible, so as not to place any negativity and unhappiness in the lives of their children. The old man seemed to generate unhappiness in all those around him, and people began to fear that his mere presence would taint their very lives and cloud their sense of happiness.

Then, on the old man's 80th birthday, he awoke in the morning with a smile on his face. It had been the first time he had smiled in years, as far back as possibly even his teen years. He felt refreshed; he had a sense of freedom he had never felt before. He was renewed.

He decided to trek into the village and grab a cup of coffee, which he hadn't enjoyed in thirty plus years. When he entered the coffee shop, the server cringed as she knew his presence was going to create a negative atmosphere in the coffee shop. To her surprise, he smiled. Her heart felt as if it skipped a beat, and she wasn't sure how to react, but instinctively, she returned a smile.

In the years she had lived in the small village, she had never seen the old man smile. She was perplexed by the change in his attitude and demeanor. She immediately offered him a fresh cup of coffee and went on her way, allowing him to enjoy the sweet aroma that surrounded him from the brewing coffee beans behind the counter and the cup which now rested in his hands.

The server quickly headed into the kitchen where she began telling her coworkers the old man was smiling today, that there was a different ambiance about him. One by one, the other servers and workers of the coffee shop would peak around the corner, spying on the old man who was sitting quietly with a smile on his face and taking in his fresh cup of coffee.

One worker couldn't help himself and wanted to know why the man seemed content on this particular day, when he had spent many years being angry at the world and shedding his negativity on all who surrounded him. With his curiosity peaked, he decided to confront the old man.

"Why do you seem happy today, when for years you have been so unhappy that everyone around you has been in fear of you?"

"Well, son," the old man said, "I have been searching for happiness my whole life, and never could find it. So, this morning I decided to wake up and stop chasing happiness, to live without it, and to just enjoy life."

It made sense to the young man. The wisdom of this 80-year-old man was enough to make the entire village change their way of thinking. They decided to just enjoy life itself, and to stop looking for happiness. The old man went on, carrying out the rest of his life, enjoying every breath he would take, and wearing a smile everywhere he went.

Everyone else in the village went on to tell their children the story of the unhappy man, and how he became the happiest man alive by just enjoying the fact that he was alive, and not looking for any particular thing to fulfill his sense of happiness.

Happiness lies deep within our souls. It is not something that can be found, but rather a feeling we get when we realize our purpose in life and when we are content with every day as it passes. Let your happiness find you by allowing yourself to just enjoy each passing day; enjoy every breath you take, every smell, and every touch, and happiness will find its way to you.