Most Thankful for My Health

by Eric Sutherland 11 days ago in humanity

Never had a broken bone, only cuts, and bruises 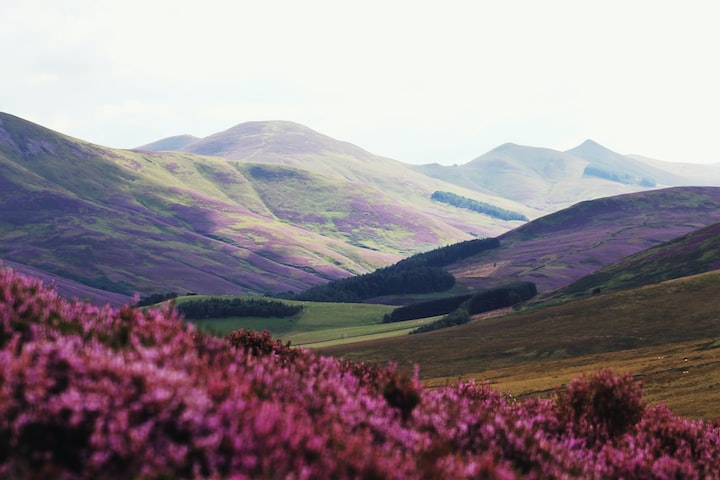 At 71 last Thursday, 19th November 2020 managed to run and walk around and over the Pentland Hills just south of Edinburgh and completed 13 Miles in 3 hours and 40 minutes. Burned a lot of calories, since my younger brother remarked I looked shattered.

In my teens bouncing down the road when one leg of my jeans caught in the bicycle chain and my nose did not break. Lucky for me two men grabbed me and helped me to the Doctors at the bottom of the hill. The Doctor put an ice pack on my nose. Later on my Tiger Cub 200cc motorbike the engine blew-up and parts of it flashed past my face. The helmet and grill saved me.

Being a bit wild at school, I spent a lot of time in the Army barracks across the road from the High School and after working out in the gym in the morning in teams of four carrying a telegraph pole up and down the Pentland Hills.

With friends and dogs from about 8, we played in the Pentland Hills and did odd jobs for Farmers in return for an egg each, which we boiled in a billy can and peeled the shell off, and ate with wild onion. The dogs kept on trying to eat them out of our mouths. One mad weekend we camped in two tents and four dogs. The animal nightlife kept them active and we struggled to get any sleep. In the morning, still excited the dogs ignored the cooking fat and licked our breakfasts out of the frying pans. So with no breakfast, we packed up and headed home.

At 16 walked, took buses, and hitched lifts around Northern Ireland Youth Hostels in Derry had to legit out of town because the Marches were starting. Then down and up the South of Ireland with nights in Youth Hostels and took a lift in a bus up to the Mountain in the North of Donegal. From there crossed over into Northern Ireland and caught the Ferry back from Larne to Cairnryan and the train back to Edinburgh via Glasgow and the bus home from Princess Street.

The next year took the train from Edinburgh to London and then down on the train to Dover for the Ferry to Calais in France and the train to Paris. Wandered around the sites and met another hiker. Since it was hot and sunny we slept on the grass facing the Eiffel Tower, only to be lifted by the French Police and spent the night in the police station jail and in the morning put on the train back to London. Saved us the problem of finding a place to stay and paying for it. From London got the train back to Edinburgh and the bus home.

From getting up on Sunday Mornings to deliver papers and then a Fruit & Veg round on Tuesday and Thursday after school and all day Saturday the pocket money bought the two-man tent, sleeping bag, and rucksack. Then my hobby started with Crystal Radio Kits from the Ham Shop and then transistor circuits. This helped me pass the apprenticeship tests. During the apprenticeship, I did a range of Test Flights to test the Radar and Auto-Pilot Systems I had installed in the Test Planes. Not being scared of heights managed this without changing colour or being sick.

After the apprenticeship did a couple of roles in Scotland and then moved to England to do a software course and started a role that lasted several months and was laid off. So started sub-contracting in and around Surrey. Then spotted an advert for a role in Paris. Needed to be fit to work for the oil and gas engineers in Lumus running well simulation programs during the day and the Le Figaro Newspaper journalists downloading news from Satellites. End up on one of ten PTT tower blocks(10 to 14 floors) with the Microwave dishes with a strength meter in one hand and the other hand adjusting the dish for the best signal. Some nights did 6 or 8, but most nights 2 or 3. Once I knew which ones carried the data required.

Then in 1977 responded to an advert in the London Evening Standard “You can jump out a balloon, helicopter or plane with a parachute, wear a gas mask and NBC suit on exercise.” This lasted 2 ½ years attached to the Army as a Support Engineer fixing mobile computer/communications systems while moving every 4 hours for 6 weeks. After the first two exercises, I lost two weeks of my life sleeping and got fit enough by going to the gym and running before breakfast, lunch, and dinner.

Have run over 20 Marathons and Cross country runs with the Hash House Harriers since June 1980. Circuit training twice a day 6 days a week means I am doing twice the Marathon distance. Eating a cooked breakfast and meat or fish with spuds and veg for the evening meal. Run throughout Europe, Cyprus, Turkey, North Africa, Malaysia, Singapore, and Australia. Still, to do New Zealand, Canada, and the USA, and the rest of Asia, the pandemic is the problem. Reached 72 on Friday the 20th November 2020.