how many meals a day should people eat.

by joshua murphy about a year ago in diet

do you eat 3 meals a day and how often are you eating. 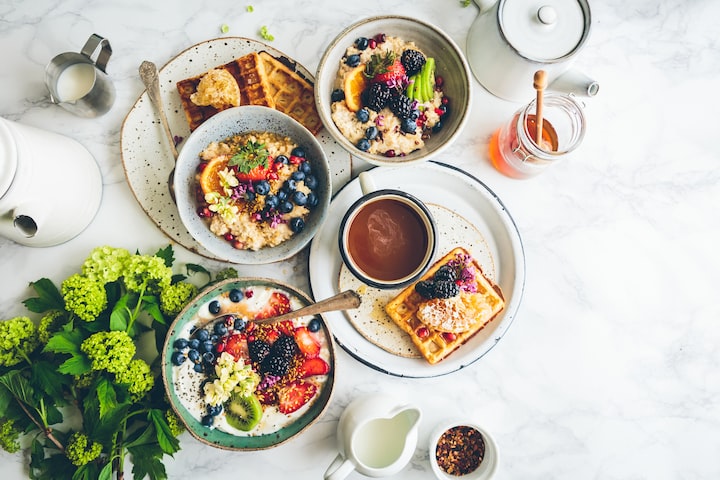 Photo by Brooke Lark on Unsplash

There is a lot of confusing advice about the "optimal" meal frequency.

According to many experts, eating breakfast jump starts fat burning and 5–6 small meals per day prevent your metabolism from slowing down.

But studies actually show mixed results and it is not clear that more frequent meals help you lose weight.

Metabolic rate is the number of calories your body burns within a given time period.

It is true that digesting a meal raises metabolism slightly and this phenomenon is known as the thermic effect of food. However, it is the total amount of food consumed that determines the amount of energy expended during digestion.

Eating 3 meals of 800 calories will cause the same thermic effect as eating 6 meals of 400 calories. There is literally no difference.

Multiple studies have compared eating many smaller versus fewer larger meals and concluded that there is no significant effect on either metabolic rate or the total amount of fat lost.

To eat three meals a day or to eat six small meals a day: that is the question. If you have heard about or read Jorge Cruise's new book, The 3-Hour Diet, you would bet the answer is the latter. But many nutrition researchers out there say, "not so fast!"

Cruise's plan boasts a three-point approach: eat breakfast within one hour of rising, eat every three hours, and stop eating three hours before bedtime. He says this ritualized way of eating increases BMR (baseline metabolic rate), increases energy levels, and decreases appetite, among other things. While many nutrition experts agree that when it comes to weight loss irregular eating patterns and skipped meals can mean trouble for most of us, there isn't anything close to a consensus on whether we are metabolically better off eating three regular meals a day or spreading that out into five or six smaller meals.

It’s become an increasingly common question for those trying to eat healthier: How many meals should we eat?

While many folks still plan their days around “three square meals,” it turns out the number of meals you eat may not be so important. How you eat those meals is what matters most when it comes to decreasing the risk of heart disease and other health problems that come along with being overweight.

“It is suggested that those who eat more frequent, smaller meals have learned how to limit their intake at each meal and do not have the ravenous appetite that accompanies the starve- all-day, stuff-all-night approach,” said Linda Van Horn, Ph.D., a registered dietitian and professor in the Department of Preventive Medicine at Northwestern University.

It’s all in the numbers.

Keeping yourself from starving helps you stay within the simple math of healthy eating.

“Overall, it is still the total calorie intake that determines someone’s body size,” said Dr. Van Horn, who is also an American Heart Association volunteer. “Excess calorie intake, whether spread out over the day or consumed at one meal, will still contribute to weight gain.”

Remember to spread your calorie intake across the course of the day. And don’t skip meals.

It may seem like avoiding food is a good way to lose weight, but it’s not. Depriving your body of food isn’t good for you, and you typically wind up getting all those calories back – and then some – because you end up making yourself so hungry.

“Those who forego breakfast, eat little or no lunch and then consume a large evening meal tend to have higher BMIs,” Dr. Van Horn said.