How I Became a Runner

by 11 months ago in fitness

After Years of Failure and Discouragement 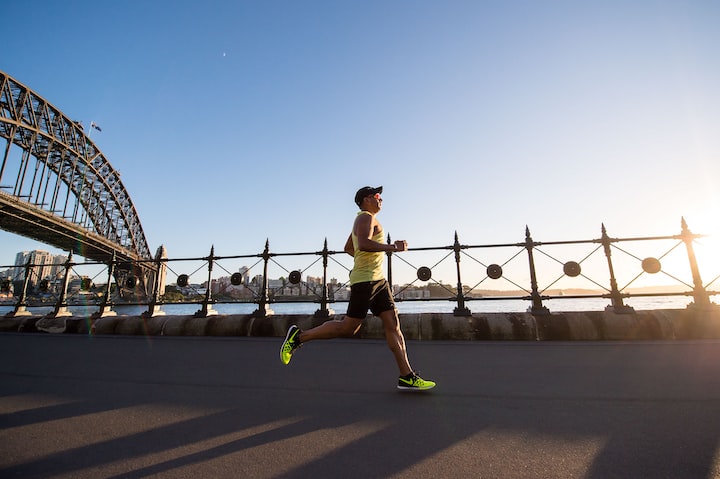 Photo by Chander R on Unsplash

Do you remember that one fateful day in gym class growing up? Yep, THAT day. The day that we had to run a mile. I remember being in 5th grade, it was a cool, overcast day. Our class walked out together to the track and our teacher explained to us that we had to run four laps--one mile--and record our time.

Now, up until this point, I had no real experience with running. Sure, I had played sports growing up like baseball and soccer and flag football, but I had never gone for a run or specifically trained for running. I started to run the mile with my classmates with confidence, but quickly realized that I needed to slow down and re-evaluate my ability. I ended up having to walk about half of the distance and finished my mile over 14 minutes.

I was terribly disappointed in myself, and I wasn't alone, as there were some kids crying over their time. This was my first experience with running--and it was disheartening and the furthest thing from encouraging.

Fast-forward to high school, I'd now become a band nerd obsessed with drumline and a member of my school's chess team--definitely not the athletic type. During my senior year, a friend of mine was getting ready to enlist in the Army and I would accompany him to the local YMCA to train.

It was during this time that I really pushed myself to run consistently. While my friend was trying to get two miles under 16:30, I was just trying to run a mile and not keel over and throw up. I did see progress after many weeks, and finished the year with a two-mile run (far from a good time, but that's not important).

Once my friend left for the Army, I stopped running and working out. However, I soon left for college, and that fall I was living in a campus dorm just two blocks from the Rec Center. I had every intention to go to the Rec on a regular basis to run and lift weights.

But that didn't happen.

I quickly became akin to the thriving social scene of college and would spend all of my free time at the student center, at a friend's off-campus house, or uptown at the bars. My health was not a priority, and I continued to put off fitness.

My sophomore and junior years of college had similar narratives, but contained attempts at consistent fitness. I participated in some physical activities, started lifting occasionally with a group of powerlifters, and began running on my own whenever I found the motivation.

But the activities inevitably came to an end, the lifting stopped when the schoolyear ended, and the motivation to run ran out.

These weren't all of my attempts and shortcomings, but you get the point!

All of this backstory is laying the foundation for a huge point. Who else has had similar experiences? Who was disappointed with their running ability? Who failed multiple times to start running consistently? I'm sure that my experience is not so far from yours.

But here's where the story really turns around for the better.

The summer before my senior year of college was the summer of COVID-19. My grand summer plans were cancelled and I was stuck at home, taking an online class, and working at Chipotle. But, I did have some free time.

I began running every now and then, which was not a new thing. Multiple time before in my life I had found spurs of motivation. I was in better shape than I had been previously, but nothing remarkable. I would drive down to a park not far from my parent's house and run two miles.

What was really cool for me was that I was running two miles under 20 minutes--a pace I was not expecting.

This was encouraging for me, so I kept running for a few weeks until it came time to go back to school for my senior year.

For the end of August and through all of September, I didn't run. And that's ok. I was busy with school, busy with work, and trying to maintain my sanity during the pandemic.

However, when October hit, I realized that I was gaining weight--much quicker than I thought I was. This spurred some motivation once again to run.

It was much harder than I expected it to be, and even though it felt like I was running fast and running hard, it took me over 10 minutes to complete. But this wasn't enough to squander my rediscovered motivation.

I ran for many days straight, just one mile, but quickly getting my pace back to a respectable time and getting my body used to it again.

So here's where the key part in my journey comes in.

One of my roommates up at school is a runner, a very serious runner. He recently ran 45 miles in one run!

My roommate was kind enough to start running with me--even though I was much slower and ran far shorter distances. After running multiple times at just one mile, my roommate took me out to a path and on our first run together, we ran three miles! And at an average pace under 10 minutes!

This was absolutely incredible for me. I was so excited to run more and was maintaining motivation to run--the difference from previous attempts at running.

So through October and November I was running only once or twice a week, but quickening my pace and building the habit to just get out and go.

When December hit, my roommate went home for the holidays, leaving me without my running partner. This was scary for me, as I realized that this might lead me to lose motivation and stop running.

It's hard to be disciplined and keep yourself accountable when building a new habit.

December turned out to be the best month for me, even with my running mentor gone. I ran over 30 miles total for the month, going on 11 runs. I was running all on my own, with no one there to push me--except me.

I'm now running at least three times a week, mixing in short 2 mile runs for speed and recovery, with longer runs of 5+ miles for distance and endurance (recently running 7.25 miles at a 9'27" pace for my first run of 2021).

I'm no longer relying on spurts of motivation to get out and run. I'm now disciplined, enjoying my runs, and continuing to build the consistency.

The benefits have been great--I've lost weight, I'm breathing better, and my mental health has improved.

Time for the tl;dr takeaways:

1. I wasn't a runner, I never thought I could be a runner, but now I am a runner. You can do it too.

2. Motivation is great to get started, but motivation runs out. You need discipline and you need to build consistency.

3. Getting a mentor or established running partner helps tremendously. If you have a friend or relative that is a runner, reach out to them. Runners love to run with newbies.

I hope this helps!

fitness
Receive stories by in your feed
Read next: [WARNING] Harvard's Dietary Guidelines Could Kill You. ⚠️