Get Rid of The Stomach! 10 Ways To Give a Ride To The Abdominal Fat

by WiL 9 days ago in diet

The more you try, the more likely you are to get rid of the stomach. Has fasting been tried? Or have you really tested everything?

Many people would rather stomach for the appearance of their stomachs, but above all, the disadvantages of stomach fat are related to health issues.

Abdominal fat, or visceral fat surrounding the internal organs, is harmful to health in many ways. For example, it confuses the body's production of stress hormones and insulin. Belly fat can also be a nuisance for a slender person, but often it goes hand in hand with being overweight.

Being overweight, in turn, predisposes to several diseases, such as type 2 diabetes, high blood pressure, high cholesterol, heart attack, stroke, some cancers, and even dementia.

In particular, some women have a genetic predisposition to fat that is easily accumulated in the stomach - instead of the hips and thighs. Accumulation is also affected by lifestyles such as constant lack of sleep and stress. Here are some ways you can fight the problem:

Are you moving enough? Aerobic or endurance exercise is an important weapon against the accumulation of belly fat.

A study published in the 2011 American Journal of Physiology confirmed that jogging is worthwhile. Regular, weekly 20-kilometer runs reduced the amount of belly fat examined.

Swim, run, bike - there are many sports, so the choice should not run out. Also remember to exercise regularly.

Walking is not a substitute for a week of exercise, but you can help prevent overweight and the accumulation of belly fat. Walking is especially important if you do office work.

A study in The Journal of Exercise Nutrition & Biochemistry found that walking controlled the amount of visceral fat. Subjects walked 50–70 minutes on three days for 12 weeks. The study was conducted in Korea in 2014.

Greek yogurt, chicken and eggs. It has a few protein foods that you should eat every now and then. Protein is not only good for muscle growth but also keeps you full for longer.

A 2009 study by The Journal of Nutrition compared the difference between protein- and carbohydrate-weighted diets. It was found that those who ate the protein lost weight and gained more abdominal fat than the control group. 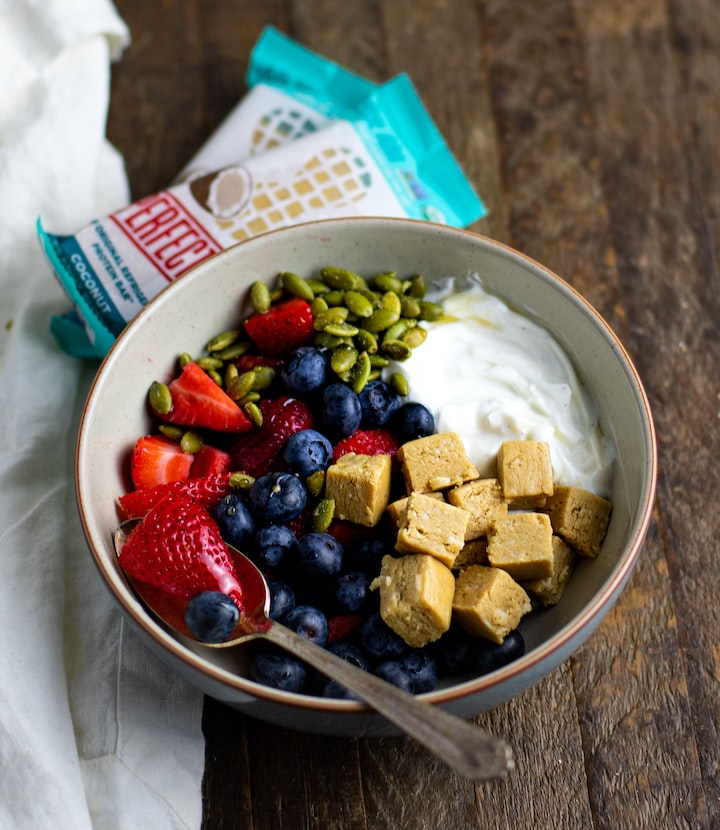 By Perfect Snacks on Unsplash

Saturated fatty acids are particularly prone to visceral fat, according to a 2014 Swedish study.

Stress raises the body's cortisol levels. Cortisol, in turn, has been found to accelerate hunger and even expose stomach fat, according to a 2010 study by Obesity magazine.

Stress can be reduced with various methods and relaxing hobbies. Try yoga, read a book or go for a hot bath.

Take care of your sleep

Continuous night’s sleep of less than five hours increases the amount of belly fat, according to a study by the University of Wake Forest in the United States. British researchers, for their part, found that those who slept for about five hours or less ate 385 kilocalories a day more than those who slept seven to twelve hours a day.

The researchers believe the results are due to the fact that sleep deprivation increases the production of hunger-boosting hormones such as ghrelins. Similarly, a saturation hormone such as leptin is less secreted.

Fiber promotes digestion and increases the feeling of satiety. Fibers are obtained, for example, from legumes, berries, seeds and whole grain products. By Monika Grabkowska on Unsplash

Fasting has grown in popularity and scientists have also begun to study their impact even more. In a study by the University of Illinois at the United States, the researchers compared the two groups. Another group lost weight in the traditional style by eating a limited number of calories each day. The other group ate more at times but fasted then. The end result was that the habits were just as effective in terms of weight loss.

If you want to control belly fat and being overweight, it is clear that your calorie intake needs to be reduced. Start with snacks. Also forget about sugary drinks like limpers.

Sugar drinks are quite deceptive. While they themselves contain calories, they also unleash a craving for greed. When you cap the lime, you will soon make up your mind about the pickup pizza. Cut the thread at the beginning!

Abdominal fat can be reduced by cooking a lot yourself and making good food choices, according to a study conducted last year by the Journal of Behavioral Nutrition and Physical Activity.

The researchers went through the data of more than 11,000 men and women. They found that those who ate at least five home meals a week were 24 percent less likely to be overweight than those who ate home food only three times a week. The explanation is that home cooks are more likely to move around and use vegetables and fruits as raw materials.