by erinhastoomanybooks 26 days ago in spirituality

Labels that you need to know 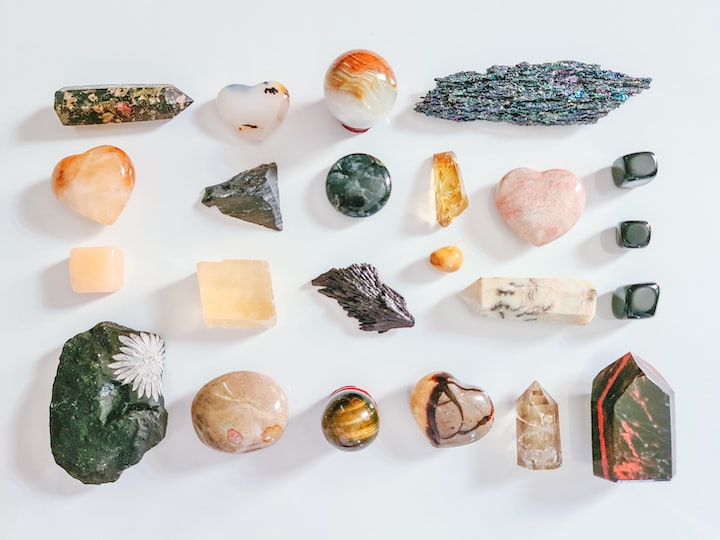 Photo by Edz Norton on Unsplash

The world of crystals can be confusing to those starting the hobby. There is a ton of terminology used when describing crystals on the market. This is my reference sheet for crystal terminology that beginners may not know.

Many beginner crystal kits boast about having tumbled stones, but what are they? They are essentially crystals that have been thrown into a machine called a rock tumbler. While in the machine, the crystals rotate over several other rocks and grit levels until they are smoothed out. The stones are then polished.

Tumbles are my favorite kind of crystal. They're shiny, and the polish shows the beautiful colors. I love how easy they are to store.

Of course, tumbles do have their downsides. In my experience, tumbled stones are easy to replicate artificially, making it hard for new hobbyists to differentiate between legit and faked stones.

I've seen these marketed as raw or rough stones, so we'll go with that. They're basically the opposite of tumbled stones. A majority of the time, rough stones will look the exact way they looked while underground.

I find that larger rough stones make better decor pieces since they look more natural. They have more texture which can lend itself beautifully to home design.

My biggest concern with rough crystals is their fragility. Rough stones are prone to flaking and shedding when handled incorrectly. Splinters are also a concern, so be careful if your rough stones are around pets or children.

Towers are crystals that are pointed on one end and flat on the other, giving them the ability to stand on their own. Sometimes the point is natural, and other times it's carved.

I talk about this in an older post (https://vocal.media/longevity/five-crystals-i-ve-discovered-recently), but it's still a common buzzword in the community.

Phantoms look like smaller wisps of crystals inside of the main body. They almost look like mirages. Their other-worldly appearance is what gave them the name in the first place. First of all, how do they form? A lot of confusing and migraine-inducing scientific answers are available, but here's how I interpreted it.

Phantoms occur inside a crystal when the main crystal's growth is disturbed or when neighboring crystals "fuse" together. There's a lot of debate on which crystals can develop phantoms as a result of this. Some say that only quartz can do this, while others point to various examples outside the quartz family. The main characteristics I look for are opacity. It also helps to see if the phantoms have a specific pattern to them. They should be sporadic and random. If they look artificially placed, there's a good chance it's fake.

A crystal that is double terminated has points on both ends, either naturally or artificially.

You see this one in larger pieces. They're also known as "sea urchin inclusions," which is peak marketing because that's adorable. Just like phantoms, Hollandite inclusions are smaller crystals that form inside a larger stone. They look like small dark stars inside the crystal.

These stones are smooth and polished like tumbles. They're about the size of your palm. Almost always, they are carved in an oval shape. I love these guys, but they can be a pain to store. It can be hard to display them because they can't stand upright, so keep that in mind.

Carved pieces are popular on the market. Crystals in the shape of angels, pyramids, spheres, hearts, and even cubes are gaining appreciation mostly because they are easy to display. You get the benefits of a tumbled crystal in any shape known to humankind. These pieces are usually the most expensive out of the bunch, especially if they're in intricate geometric shapes.

So, there you have it. I'll be sure to update my page if I come across any more terms I think are insightful. For now, here are some keywords to keep in mind if you are shopping for crystals. Thank you for reading. You can find me on Instagram @erinhastoomanybooks!

Hello! Welcome to my page where I love posting about crystals, fashion, design, writing tips, and opinions. You can find me on Instagram @erinhastoomanybooks