Journaling Has Helped Me Separate My Work From My Identity

From rejection to rejuvenation—why journaling was my saving grace in writing. 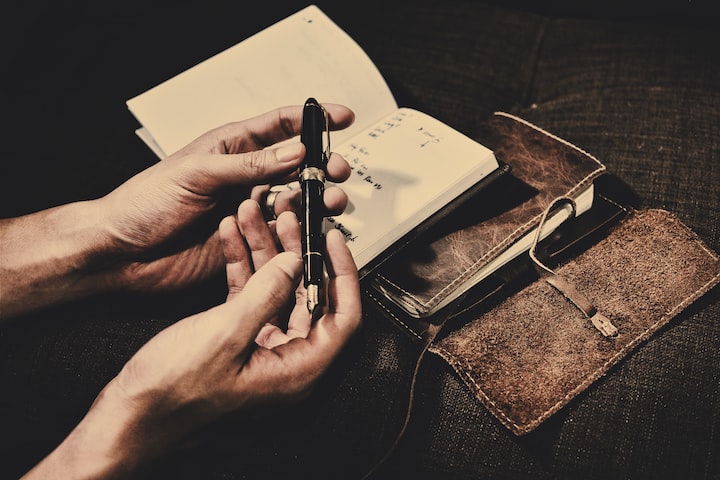 Photo by Lawrence Aritao on Unsplash

I was dealing with rejection long before I ever became a published writer. There's a good possibility that this is why I've been able to stick it out in this industry of sorry-not-for-us emails and crippling rebuffs.

Ever since I was old enough to be interested in boys, I've been getting rejected by them. Social anxiety that came out in the form of loud outlandish proclamations, combined with my ability to cancel plans within minutes of making them, has caused me to not fare well in the dating world.

It's a story as old as time.

Weird girl develops a crush on popular boy in school. Popular boy doesn't know she's alive. Girl decides to be brave and try to talk to popular boy. Popular boy, despite being popular, tries his best to let weird girl down gently.

Enormous booger shoots out of weird girl's nose just as she asks him if he'd like to come over and play Mario Kart at her house.

And so the cycle continued. From teenage love interests right up until I found a man who would love me for the weird girl I was always destined to be.

I sometimes wonder if I chose the writing world as a profession because I was already so used to being shot down by people who were much more talented and (probably) good-looking than me.

In the first few years I began submitting work to literary magazines, I received rejection notices like they were going out of style.

Now, looking back on the sloppy work I was sending to these professionals, I can see why. However, at the time, as all young writers are apt to think, I believed my work was the best thing that might ever slide into those editors' email accounts.

So, despite my history with rejection, receiving these rebuffs would spiral me into a deep dark depression.

Instead of getting rejected by my love interest, I had doomed myself to a life of email after email of sorry, not for us, slips.

Now, ten years later, I've managed to wriggle my way into the hearts and minds of a few lit magazines as well as countless online publications. So, that feels good. But in all honesty, the rejections continue to sully my good name.

One might think that I would have gotten used to it by now, but the truth is, it's almost worse.

I know my writing is better than it used to be. How could it not have improved? I've been validated with publication. Besides the endless hours of self-study and reading too many articles and books to count, a person is bound to pick up on some helpful hints on how to be better.

So now, when I get rejected by magazines or publishers, it feels something akin to a personal attack. Suddenly, I— the human being, Lindsay Brown—am nothing but dog poo upon the shoe of writers much better than me.

It all sounds a little self-pitying, I know. However, it is a difficult thing to quiet the ego monster of one's brain. And if I know one thing, it's that writers have the biggest ego-monsters of them all.

Several months ago, I received a particularly shocking rejection from a publisher that I was sure would want the piece I was pitching. My heart fluttered upon receiving the email notification, and my hands shook as I clicked my Outlook app.

Then, as plain as day, "It's a funny piece, but not what we're looking for at this time."

I've never been much of a journaler, but in recent months have picked up the hobby. Not to delve into any deep and personal mysteries about myself but because I've been reading a lot of David Sedaris. He keeps a diary of things that happen to him throughout the day and uses those entries to craft funny and relatable stories about his life.

So in an attempt to be exactly like Davids Sedaris, I too decided to start documenting my day too.

I crawled dejectedly over to my nightstand, grabbed my notebook and began scribbling my woes upon the lined paper.

Oh, the injustice that only I have felt in this career, I wrote. Everyone else I know is getting ahead in life, and I, cruelly, am destined to stay in the same place never again to know the sweet, sweet taste of success.

I then realized how stupidly sarcastic this little entry was, which made me feel better. But something much more critical started happening as the days of journaling continued.

I realized that I love my writing.

Writing for oneself is different than writing for an audience. When we set out to construct an article, there are so many things we must ensure.

But now, here I was, writing daily just for me. I didn't care about the logistics of article crafting. I was oblivious to the worry of whether or not an editor would like it. I was writing for the sake of writing, and I was funny.

The entries were about anything and everything.

How I saw a woman pick up her dog's shit and bring the bag right up to her nose and take a long deep whiff on my walk that morning.

Another woman in the Walmart parking lot that spent, I kid you not, two whole minutes picking her wedgie. As well as the fact that I sat in my car watching this spectacle without question.

Journaling reminded me of how fun it is to write.

After years of chasing the almighty trophy of publication, I was giving myself the gift of happily slapping words onto paper with no intent of using them anywhere else.

As professional writers, we can burn out because the writing becomes mechanical and all-encompassing. We know in a roundabout way what goes viral and what needs to be written about to pique readers' interest.

It all becomes work rather than passion. And well, that's okay because we gots to pay the bills, my friends.

By free-writing or journaling as a hobby, we can keep the spark of passion alive in our words. After only two weeks of journaling every day, I found that my articles' jokes and tone had become much fresher and more relatable.

As creatives, we sometimes need to protect ourselves from the rejection of our work and step back to a simpler time. Reminding ourselves why our craft was so vital to us in the first place.

More stories from Lindsay Rae Brown and writers in Journal and other communities.