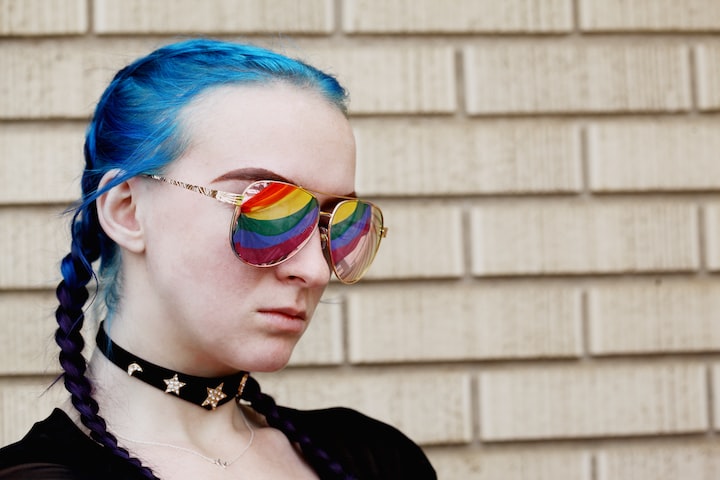 For those who are unaware, someone who is transgender is a person who doesn't identify with the gender that was determined by their genitalia at birth. The term transgender also includes a few different subsections, with various, more specific, identities and labels. For starters, there are those who still consider themselves to be on the gender binary: female to male (FTM), or male to female (MTF) transgender. But, where one can still be on the binary, there are others who don't quite relate. Those who don't fit into this strict rule of binary- male or female- are non-binary. This label is inclusive of every other gender identity, such as genderfluid, genderqueer, bigender, agender/nongender, demiboy/demigirl, etc.

As I'm sure you've noticed over your time here on Earth, there are many days throughout the year that are associated to different causes, awarenesses, communities, and so on. We have Black History Month, Pride, Breast Cancer Awareness Month, World Autism Awareness Day... the list goes on for miles.

You may want to get involved. You may want to speak on these topics, learn more about the issues, inform others about what's happening around the world. That's wonderful! But, where do you even begin? How do you bring visibility to things that people aren't talking about in their daily lives?

This may seem like a really silly, or really obvious, one, but it's honestly one of the most important and easiest ways to get the word out there. Because of this, it's also one of the ones that are often overlooked. If it seems too easy, too simple, too obvious, people tend to forget about it.

But think... What is the one thing that almost everyone uses at least once during their daily lives?

Still not sure if it seems 'professional' or far reaching? How do you normally find out about things happening in the world? How do you hear from your elected officials, or those who are seeking election? Where do you typically find your news sources, or hear about crazy things that happened to people in your area?

Chances are, you're getting all of that from social media, too.

This is where you'll get your largest reach. People can share what you've posted, comment, start dialogues, and, depending on the platform and type of post, even donate to specific causes. This can spark interest in others to do more research, and as they share that information you've posted, even more can get involved, share, and so on. It's your ticket to the world, and it's free.

Use Images, Comics, or Memes

Great! You have this topic you want to talk about, you know where you want to post it, and you have a lot to discuss. You've written this long explanation that's full of details, attention grabbing, and once someone starts reading it, they want to finish it to the end. The only problem is... no one starts reading. I thought you said social media was the ticket to the world? Why isn't the world getting involved with my post?

Think of it this way: when you're scrolling through social media, do you stop at the really long article-type posts? Or do the visual images capture your attention and pull you in regardless of text length? More often than not, if the post is all text with no visual stimuli, you're just going to scroll on past. This is the same for most of your fellow humans. So, you've got to engage them. Make them want to read your well-written and informed textual sidearm. Draw them in with a snack and give em a whole banquet!

You can do this with any sort of image. It can be an actual picture, a comic strip, a meme, whatever- as long as it relates to what you're discussing in your text. If you're image is attention grabbing for the content, but then your text does a 180 in topic discussion, they'er going to stop reading and move on. Let's say the image is about the Fight for Fifteen wage increase, but your text is about elephant poaching. They're probably going to move on fairly quickly. They want what they came for, what caught their attention and made their eye investigate, not something else.

So, find those images, give proper credit, and spread the word! But also make sure to

Talk to People From Those Communities

This is vital. Sure, you can learn a lot from some google-ing, and finding academic articles. Sure, for some topics there may not be anyone TO talk to who's lived/is living through the experiences you're trying to bring light to. However, if you're talking about something that impacts people, talk to those who are impacted. When discussing trans rights, get your information from trans individuals and trans-supported organizations. When speaking up for indigenous peoples, talk to those specific tribes you're bringing awareness to.

While discussions and visibility are great in and of themselves, if the wrong information is given, it can be misleading or even damaging. If you're speaking on trans advocacy and, for example, say that all trans people feel dysphoria in their bodies before transition, this is inaccurate. While many people do, this is not the case for every trans person. This also makes it seem like every trans person transitions, which is also not the case.

This small tidbit, this little nugget of words, can invalidate these individuals within their own community, and break apart the understanding that we've worked so hard to make known. However, had you spoken to trans folx, seen their posts and discussions, been involved in community groups (in person or online), you would have known beforehand and prevented this type of dialogue. By speaking with those who are impacted by these topics, you get a more complete and whole truth, and can continue to spread the accurate accounts and bring the most correct awareness to others.

That's some true visibility right there!

And, you didn't even have to pay a penny to do it.

For more information on trans issues, resources, and more:

To read more Trans-related stories written by a trans person, check out:

Trans Before, Trans After

or stay updated with my creator's page, as I'm sure I will write more of these type pieces in the near future!

**If you liked what you read, or learned more than before, go ahead and leave a heart, or share it so others can learn something too!

I appreciate any and all likes, shares, and donations. They help me continue to grow and evolve as a writer. Thank you so much!**