Travel in the time of Covid

Getting out of the country is possible but not easy 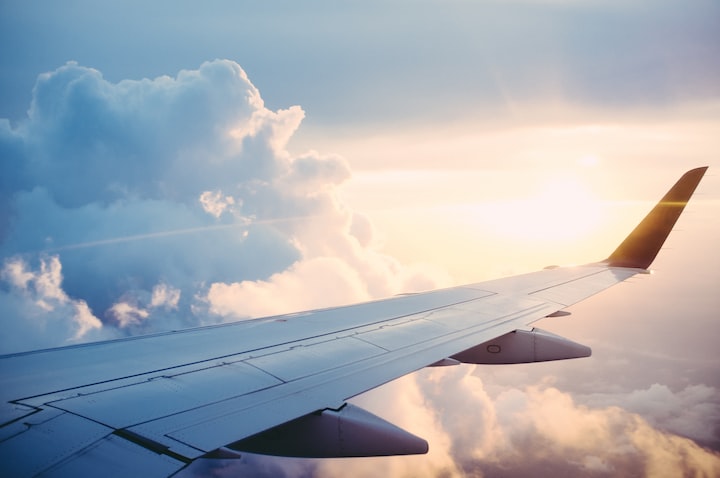 Photo by Ross Parmly on Unsplash

I'm not overly keen on flying. Being sandwiched with strangers into seats for slim buttocks and short legs is hard and as I don't have elbows which like to stay firmly tucked into my rib cage for the whole flight - well, it can make for an uncomfortable journey. And this was what it was like pre-Covid. Adding to that a mask that MUST be worn at all times and a wariness about the person sitting next to you, developed from an innate need to stay healthy and there is no doubt that Covid has definitely added extra elements to the experience.

Not that I'm grumbling really. I can't express to you how wonderful it was to be travelling again. You see, I love to travel and have been fortunate enough to do lots of it and I am mightily pleased to be doing it again. And these couple of years have been hard, restrictions abounding to keep us safe and at home and I'm glad for these. I'm an asthmatic so the virus would probably torment me, stifle me, possibly kill me and I wouldn't want that.

But what has been especially hard is ill parents. Parents collapsing and breaking bones and doing this on the other side of the planet to me. Previously, this has all worked out rather well with visits which involve family reunions and meals out and pub get-togethers and friends reuniting but it all had to come to a halt when this pesky virus threatened us all.

When my dad collapsed and was carted to hospital in an ambulance, I felt the distance. Not that I could have visited him. Not even my mum was allowed into the hospital. However, knowing that he was poorly, in hospital and I was miles away and that travelling would be costly and difficult with the added danger of bringing a virus which cloaks itself in an asymptomatic disguise, it was a tough decision to stay put. I would never have forgiven myself if I had brought Covid to their doorstep. All I can say is thank goodness for video calls as they were a lifeline for my dad, on his own in a hospital ward and for his daughter, anxious across the Atlantic.

Some weeks later, my mum fell over nothing and dislocated her shoulder. In trying to get it back into its socket, the ball joint was broken and my mum had to wait weeks in pain to have it fixed. Waiting for titanium replacements from Germany and surgeons working on a limited operating schedule, my mum had to wait. And so did I, again relying on daily video chats to reassure me that all was well.

A trip to the UK, then, was well overdue and this August we decided to take the plunge and find our way to Britain to see family. My husband and I also wanted to see his elderly mother, suffering with osteoporosis so the impetus was there for us all.

Travelling abroad in Covid times is like running a long and tiring race, like a steeplechase with hurdles and water hazards whilst being bombarded with small pellets.

Steadily, as vaccinations rolled out, a visit seemed more possible than it had in months. It had been a distant speck on the horizon, a vague hope but now, it felt like it was thundering towards us. When my fourteen year old was able to be vaccinated too, I could see its dust cloud as it approached. When we worked out that my ten year old could quarantine when we got back and still be able to start school at the same time as his friends, that visit was running up our street and almost in the hallway with the stars aligned behind it in a way that made it feel like it was our destiny.

But there was still the hurdle of testing. Not difficult in itself; maybe a bit uncomfortable but doable.

Also, quite easy to ascertain if it's necessary if you're an adult or teenager but the grey areas about children were confusing. Doing extensive research didn't help neither. Our flight provider said our ten year old did not need a test; the UK government website said we did not need a test for him too; however, another page on the same UK government website said that we did. Who to believe? Do we take a risk and turn up at the airport, quote the websites various and hope for the best?

There wasn't much room for manoeuvre if you got it wrong. A small window only. Let's talk about that window. You have to have a test in the three days before you travel but you have to allow enough time for this test with its hopefully negative result to come back - you don't want to do it too soon; you don't want to leave it too late. The travel clinic advises that if you are leaving the next day, they will cancel your appointment as they cannot guarantee you will get your results in time. All nerve-wracking stuff.

Imagine how you feel when having completed your testing, you decide to just double check everything, just to make sure and discover that you may be wrong about your youngest not needing a test; that there is a chance that he won't get on the plane; that there is no quick telephone contact to call who can reassure you; that even though you double-checked with the airline, the government says differently?

This, unfortunately, was our experience. It was a panicked morning. However, we were lucky enough to get a test for him at the same clinic, by arriving there without an appointment and pleading our case. I'm not sure what we would have done if they'd said no. But they didn't and I could feel my blood pressure dropping with each turn of that swab in my son's nose. And it had only cost us an additional $200 to get him tested.

Yes, that's right. Just to get onto the plane, we had to fork out $800 to get tested. And that was just in Canada. More tests awaited us in Britain which would need to be paid for.

Getting tests done may relieve pressure for a while but it is soon mounting again as you wait for those all important results to land. My son likened this experience to penalty shootouts in soccer; that anticipation before the shot is taken, before the disappointment or glory that follows. What made it worse is that the first three results for myself, my husband and my teenager came through in quick succession. Three negatives! Boom! Boom! Boom! Early morning on the day before we were due to fly and we were three quarters the way there. Except the last result didn't arrive until the evening after nails had been chewed to stumps and clumps of hair littered the house from anxiety. It was negative. We could board the plane.

Next hurdle: complete the Passenger Locator Form, print out copies of everything, make sure I had all the paperwork for the tests in England, do a checklist to make sure that nothing was forgotten and we were away.

You don't know what needs to be entered on these forms until you do them. You can open an account but not save any additional details. Leaving time to do this accurately is essential.

It was a shame that other people at the airport hadn't realised this. Other travellers, who unfortunately were ahead of us in the check-in queue, may have been lax in their research. There was a lot of fumbling with phones and entering of data, which held everyone up. Time was ticking, staff were short, queues were long, tempers were frayed.

It takes longer to check-in, people. That's a fact and will be for the foreseeable future. Doing your research is paramount to make it as smooth as possible. Another example of how we are all in this together. It's a nuisance and a pain and a faff but if it means we get to travel again, it can't be a bad thing, can it?

We finally got on the plane after the usual security stuff and never have I been more relieved to sit for hours with nothing to occupy me but a trivia quiz, some foil wrapped food and some erratic dozing, despite the limited space and the proximity to others. I snoozed behind my mask and took it off only to eat and drink. Not everyone followed these rules and the airplane staff had to regularly remind certain individuals to cover their nose and mouth, sometimes getting a little shirty with them. I could understand this: I was repeatedly pulling my brain away from thinking that I was contained in a giant flying test tube. This was their job. They had to do this all the time. Trusting others with your health is never easy.

The flight went and our entry to the UK did not feel that different to any other time. More papers to show and questions about whether we understood the rules and we were on our way to the hire car place which was the easiest car hiring I have ever experienced with chatty friendly people, less harangued and eager to please and engage in conversation. The lady who served us said that it had been so long since she had seen children and I have to say that I felt for her. I do not exaggerate when I say that she was emotional as she passed her eyes over my tired sweaty children.

Ahead of us lay the M25, a long motorway car journey, the chance of traffic, rain and BBC Radio 2 and beyond that, boxes filled with test tubes, long cotton swabs and plastic envelopes.

But more than that, what we had come for: long awaited hugs and banter and new memories to be made, all of those things that the needles and the swabs had made possible - long awaited human contact.

Primarily a blogger and book reviewer, I do sometimes dabble in writing fiction and especially enjoy the medium of short stories. I have published some of my stories on Reedsy Prompts and share all of my writing at scuffedgranny.com.

Read next: To express one's emotions in the right way is to be truly complete