by Leo Dis Vinci 9 months ago in humor

Covid-19 is responsible for lots of new emotions and experiences that as of yet don't have a name, here are a few suggestions for the new language of Coronavirus 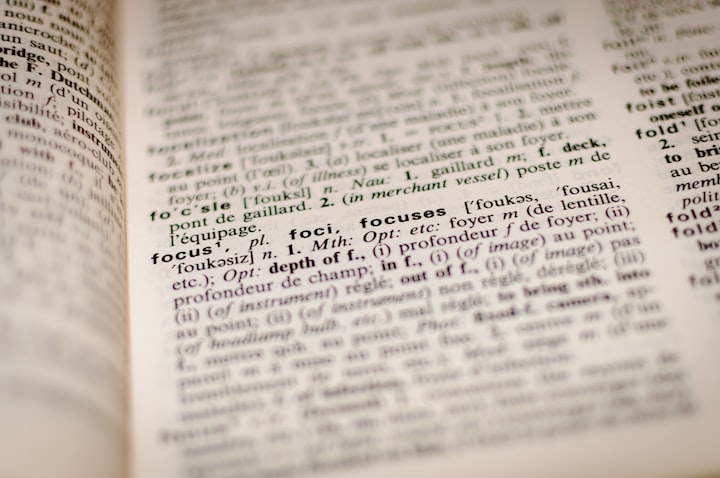 Photo by Romain Vignes on Unsplash

Ever since Coronavirus, Covid-19, the Rona, or whatever you want to call it, came into our lives, things have been different – drastically different. Every day has become a collection of disconnected socially awkward moments with once simple tasks becoming a massive ball ache to achieve.

The Sci-fi films of my youth promised many things. While many suggested that life in the future might not be all that, they at least promised cool clothes, proper fucking robots, flying cars and a bleached blonde Wesley Snipes - no matter how dystopian a future they presented. Not one single 20th century Sci-fi movie suggested that in 2020, I would spend most of my days queueing for beans in a face mask sewn by my future Mother-in-Law whilst side-stepping and mumbling muffled apologies to every human within a two-metres radius of me.

It's safe to say Covid-19 sucks. It sucks on an epically global scale. It's fucked up everything we'd all planned this year, and we're all having to adjust to the fact that life as we once knew it might be several months (even years) from returning or worse still never return at all.

In the last few months, I have, (we probably all have) experienced several things, thoughts and feelings that are a direct consequence of this dick of a virus. While these experiences have been very real, I have lacked the vocabulary to describe them accurately because there aren't yet words to describe them.

I have, therefore, decided to create my own Covidian nomenclature to define these now day-to-day experiences. And yes, I am afraid, many of them are Brexit-style bastardizations of the word Covid and another word. I am, however, not precious and I am more than welcome to hear better suggestions of words to name them. Here they are:

The awkward expression displayed by one or more humans when getting too near to one another in the post-Covidian world. The look frequently consists of raised eyebrows, a gentle shake of the head and when visible a mouth shrug of pursed lips. A covlush is frequently accompanied by a murmur of apology known as a cohush.

“Dominic didn’t exhibit one single covlush on his trip to Banard Castle.”

To show social awkwardness in a once perfectly normal human interaction such as walking down the street, entering and exiting doors, queueing for groceries.

“She covlushed uncontrollably as the gentleman in front held the door open for her like it was January 2020.”

A dance believed to have originated in Wuhan Province, China but popularised and mastered in the United Kingdom. It consists of a socially uncomfortable two-step side-to-side shuffle. In contrast to the South American Tango, it is in no way sexual hence its popularity in small local shops in the home counties of England.

“Vivian became rather flustered as she was forced to engaged in a non-socially distanced covango in the aisle of her local Spar.”

“They covangoed all afternoon around the shops of Pitlochry.”

Specific and uncontrollable anger felt towards other humans who are not taking coronavirus seriously and are flouting the rules and minimal expectations of humans to be considerate towards one another in epically potato-headed ways. Ronarage has had various stages throughout the pandemic. It was initially aimed at toilet-roll hoarders, then at beach visitors and most recently at those who choose not to wear masks when required.

“Karen had a severe bout of ronarage after she saw the pictures of thousands of young teenagers enjoying their much prettier and slimmer lives on the beach.”

To feel or express a specific and uncontrollable anger towards another human for being a selfish ball bag.

“Donald ronaraged violently at Mitch’s disregard for not wearing a mask to cover both his mouth and his jowls.”

The simple and often little domestic wins of DIY, home-cooking, creativity or family time achieved by an individual or household during the pandemic lockdown.

“Presenting his TV show from home was a real covin for Trevor.”

To succeed or achieve a small but nevertheless pleasing victory in the comfort of one’s home.

“Charlie really was covinning at life with the tarte tatin he had made his brother Emilio.”

To talk or discuss in great length how coronavirus has impacted your life and specifically the first thing you will do once life is back to normal.

“Nancy and Chuck convustulated all night about how the virus would impact the election and how life would return to normal in January next year.”

Convustulation. A long rambling and very hypothetical conversation about coronavirus that has no logical or natural conclusion.

Feeling thoroughly exhausted that this year and this shit is still happening.

“Boris got twentitwentid with pretending to know what the fuck he was doing by giving another press conference.”

The slow and increasingly messed up way that dreams have become way more vivid than usual brought on by the uncertainty that coronavirus is having on life.

“Vladimir had dreamcrept for the last few days that he wasn’t a strong shirtless man on a horse.”

A nightmare or night terror experienced during the lockdown and brought about by the realisation that we are all going to die one day.

“Last night, Tucker had a terrifying dreamcreep that he actually told the truth on air.”

A disease affecting several world leaders, billionaires and CEOs during the coronavirus pandemic. Symptoms include uncontrollable verbal diarrhoea, speaking in bullshit, bouts of egotism at a time when compassion is needed, and fits of being a complete and utter dickhead. In the UK, it is known as ‘having the Johnsons’, in South Africa as ‘the Musks’, Brazil ‘a Bolsonaro’ and in China, where the disease began, simply as the ‘Xinpings’.

“Luckily all the female world leaders have been immune to Trumpitus during the pandemic.”

The lack of fucks given by house cats, and to some extent dogs, about the global pandemic. From the old French meaning, no cat cares. Despite the increasing stress and concern of their owners, cats can continue to sleep 23 hours a day while the humans around them lose their fragile little minds.

“Dobby, the house cat, gave a nonchatlant look as his owner lost his job.”

The change to economics experienced by households due to the pandemic. Furlough schemes, closed pubs and bars, job loss and amazon binge buying are all common factors affecting change.

“Anthony’s impending job loss would effect the covinomics of his family severely.”

There are, of course, plenty more everyday feelings, experiences and occurrences being caused by Covid-19 and I encourage others to create their language to define the shitness of life in 2020.