by Holly Jackson 2 months ago in fact or fiction

In the year ending March 2020, there were around 46,000 offences, including 259 homicides, involving a knife or sharp instrument in England and Wales; the highest number of offences since 2011. 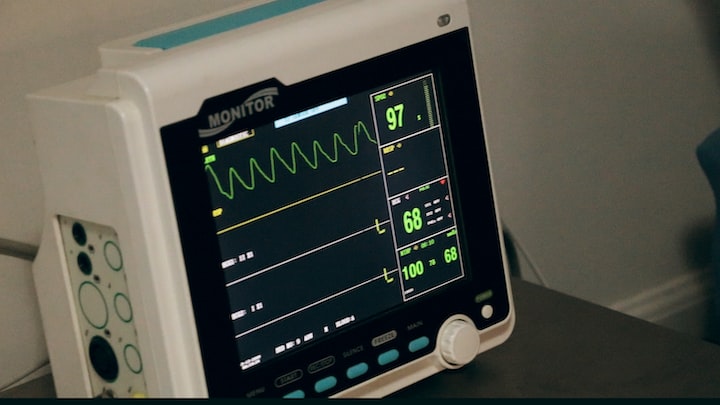 Photo by Jair Lázaro on Unsplash

They say when you die, you’ve got to follow the bright white angelic light and *poof*, you’ve made it to heaven. You’re saved. Jesus loves you. Congratulations. Well, they’re not wrong, but they’re certainly not right. There’s no angels beckoning you into the beyond, no fanfare, no bearded skinny white man standing at a gate with open arms, calling me son and telling me my sins have been forgiven. Alternatively, there’s no fiery red horned demon with a pitchfork cackling in glee as I descend into some kind of pit for eternity either. My mum will be so disappointed.

There is, however, a light. I can see it. Right in front of me. Small, like a laser, dull and luminous green, it's hovering in front of me surrounded by complete blackness. If I didn't know better, I’d assume it was that gross green ghost from ghostbusters. But it ain’t. Its flickering, pulsing in sync with the distant beeping of a monitor somewhere. It sounds miles away, and the further away that noise gets, the brighter this green light becomes. Honestly, it's a bit scary.

My name is Kareem. I’m 20 years old and I’m dead. Or almost, at least. I’m not entirely sure how, or why, but I’m absolutely certain that if I go that way, towards that green light, I’m a goner. I forget how I got here, to this black empty void, but there are some things you just know instinctively and I know I’m definitely dying. I keep reaching for memories, anything for reassurance that I’m still me, but the further I reach, the further away they go. I know they’re there but it's just out of touch, like trying to grab smoke with your bare hands.

I remember London. My city. The best city on earth as far as I’m concerned. The hectic chaos of the Tube, the endless streets holding the most eclectic mix of people from every nation in the world, the food, the smells. My home. I’d die for it. The more I think of London, the brighter this light is getting. It's come slightly closer to me now, the neon emanating from the glow is giving me a headache. My stomach hurts. I push the thoughts away, let's think of something else, something less painful.

My Mum came to London when I was young. Like, a baby, young. We came all the way from Somalia, crossing the desert and the sea, suitcase in hand, empty pockets and bright ambitious futures. Concrete replaced dust, but survival is the same wherever you are in the world, it doesn’t matter where you are. The world was even less kind to people like us then, but I was just a baby. Hard to imagine, I know. She did her best, my Mum, but with four kids and no husband by the age of 40, London wasn’t so kind to her, but she’s a hero to me. A truly pious, beautiful woman, she works so hard to provide the best for us. I’m the oldest, the man of the house. Two brothers and one sister to help my mum raise. She’s never home, working double shifts at the local hospital just to keep the lights on. Often she’ll shuffle through the door late in the evening, bags upon bags layering the speckled brown skin of her face under her eyes. Pushing through the tiredness, there hasn’t been a day where dinner hasn’t been pre-made, sitting in the giant cast-iron pots on the stove ready for reheating. Everyone knows it tastes better the next day. So, as the man of the house, that left me with mouths to feed, homework to do, laundry to wash. Don’t get me wrong, it’s my duty to do these things, just we needed a little more money on the table to keep my brothers out of trouble and to protect my baby sister and with Mum working all the time, that responsibility fell to me.

There it is again, the pain in my belly. Time to move on before this green blob gets too close. The beeping has basically disappeared, it takes a good few minutes of concentration to bring it back. That sound, so familiar, but just as ominous as the light. I don’t really know why I’m telling you all this. I guess if these were my last words, I wouldn’t want anyone getting me twisted. I am, I was a good kid. I don’t deserve this, whatever this is. I wish there was a way to go back, not get stuck with the people I did. I ain’t a bad guy, just a good guy bad things happen to.

The more I remember, the louder this beeping is getting, but the more pain I’m in. I'm scared. I don't want to be here. I can feel the panic in my throat, constricting me, pushing whats left of the oxygen in my lungs right out into this black abyss. Trying to be calm, I think of college. I remember my friends, more like my family, Somalis, Eritreans, anyone from the horn of Africa really. London is an immigrant heavy place; so many families, so many boys just like me. Displaced, lost, indentityless. I’m not English, but I don’t really feel Somali either, and that’s part of the problem. I fight to protect my house and home, my postcode, my family, but I don’t ever get the respect or that feeling of belonging I deserve.

My own community shunned me. “Oh that boy is no good,” they say to my Mum. “He’s mixed up with the wrong crowd”. My friends don’t respect me. “We’re second gen, born here. You’re fresh off the boat”. And everyone else is scared of me, crossing the road, avoiding eye contact like I’ve got a knife up my sleeve. And you know what, some of the time, they’d be right, and that’s the worst part of it. When you know you’re heading down a road, but the brakes have been cut and you can’t turn around.

I can slowly begin to feel around me now. My toes, my legs, the deep pain in my stomach, the rising and falling of my chest with every breath, something sharp cutting into my left wrist, the pulsing of my faint heartbeat through my head. The beeping is much louder too, but there are voices now, dull and indecipherable, that weren’t there before. The green light is just a speck in the dark now, whatever I’m doing, I guess it's working.

I think of my home, my community. UB3. Terraced houses, bright red brickwork lining the potholed streets. A highstreet populated by shops in a perpetual state of shutting down; hairdressers and charity shops the sole survivors as well as one strategically placed Greggs, a bakery of cheap wonders. I’ve literally laid my life down for this area, and what has it got me? The more I think, the more the dots begin to connect themselves. The hustle had its risks, turf wars, the neighbouring communities slowly getting too big for their boots. Everyone looks for opportunities for expansion; there are plenty of ways to make money and more opportunities the more area you cover. Quick maths. The audacity, however, was the one thing stopping all out war. The one thing I’ve learned in my short twenty years, is that you can never let anyone disrespect you. Your name is all you have, so if those pricks from HA1 are going to step on our ground and try to take it from us, we can’t let them.

It was a Wednesday, it’s all coming back to me now. Drizzling in classic British fashion. The kind that subtly soaks you without you noticing until you get inside and realise you’re dripping. I remember his face. Angry, soulless. His eyes black, the whites of his eyes yellow with tiredness. He was the same age as me, I guess, maybe younger. He had a west African look about him, the unmistakable jawline, maybe Ghanean, Nigerian. Not that it matters. We’re all immigrants here. He growled as he took more steps onto my neglected highstreet, a threat of violence reinforced by the slow reveal of a large curved blade glinting in the evening light. With trembling hands, I reached in my pocket and pulled out my knife, a means of protection I never had any intention of ever using, now the only thing physically and metaphorically stopping my life from ending. I don’t know what happened next. The black came, the pain came, the ethereal green light came and here I am.

I don’t know what happened to him, my mortal enemy from across the border. All I know is that I made it, somehow, by some miracle, the green light has almost completely faded into black. The monitor and voices become clearer with every heartbeat.

My name is Kareem. I’m 20 years old. And I’m alive. I've been given a second chance.

Receive stories by Holly Jackson in your feed
Holly Jackson
Read next: How Bad Was Your Latest Break-Up on a Scale from One to Wuthering Heights?