by M.E about a month ago in literature

A story about finding new horizons 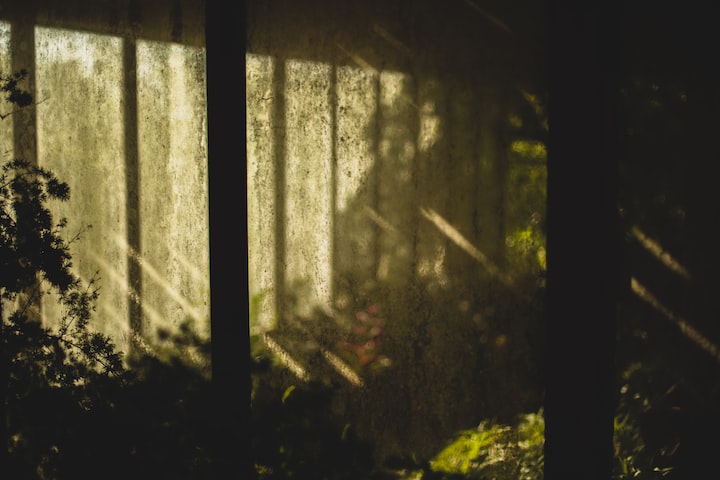 Aged yellow walls, a small bed, an old armchair. The mutable landscape of the neighbor's house framed by a window. These were the only things I'd seen for the past 5 years.

In my bed, I look down and see two inanimate objects, made of skin, bones, and muscles that end at my feet. Memories of a life in motion. Mother used to tell me, "You should try doing physiotherapy, leaving the house in your wheelchair." I didn't want to go out. I was mad at life for what it’d done to me, and not living it was my revenge.

Mother had then removed the curtains from my window. I know she was trying to trick me into seeing life and wanting to live it. I made a fuss about it but she didn't care. She said she wanted me to have a different horizon than the one life had in store for me.

Since my landscapes varied between pristine white hospital walls and my room's yellow wallpapers, I accepted it. I used to have horizons that would pass by me at 14mph or 18mph if it was a great day. I would run to finish lines, complete challenges. Now, the horizon that came to me was slow, almost frozen in time.

My window frames a huge house with a gateless big garden. I can say it's one of those mansions you see these days, that was passed down between generations, from the effort of parents to the hands of spoiled children.

I have no alarm, but every day religiously I open my eyes at 5 am sharp when the first rays of sunlight come in through my window frame. A yellowish and orange light illuminates my room from behind the trees and warms the grass as the dew, slowly and lazily begins to sneak off the asphalt, traveling its own journey. Even the dew is freer than I.

And every day at 5:15 am he opens the door to his garden and holds his white coffee mug. We look at the same horizon. I like to think that he is saying a prayer, and giving me good morning. After, he walks to the middle of the garden and begins his ritual. I never wanted to know his name, but I know deeply about his routine, which has been replayed daily for three years.

Gravity tells me he's in his late 70s, gravity and the veins on his bulky hands. With the passage of time, once strong legs and arms only carry the memory of having been eagerly used. His skin shows signs of having lost a long battle to the sun. A thick mustache rests on thin lips and sits beneath aviator sunglasses which hide eyes that probably have seen a lot, but that lately only see in colors of pain.

This morning, I could see his thick fingers tying and untying the rope knots as if that movement would undo his own life entanglements. Tired, he went to the next expected move, slowly polishing the sides of the small sailing ship, caressing the memory of what no longer existed. He would spend so much time with it, that I think they were becoming one. While the ship was a white and blue Schooner, with two masts and two white sails, he would always wear linen blue shorts, be it winter or summer, and a polo white shirt, the same outfit he was wearing on that fateful day.

Watching him is like meditating- a slow, repetitive process. Once a year, he would hoist the ship’s sails and leave them open, embraced by a wind that wouldn't take it anywhere. I think that's how he feels about life. Passing through him while he is anchored to his past. It happened three times already, so I venture to say it symbolizes the anniversary of the day they left.

I hear a light knock on the door. "You can come in, mom," I say. Unlike the alarm that I don't have, I repeat this every morning. As my neighbor, my life is also an eternal ritual. Dreaming that I can walk again. Opening my eyes and remembering that I live in reality. Look at my legs, lament. Forget about it. Observe my neighbor.

“I brought your favorite: Orange juice and sourdough bread with avocado!”

"Thanks, mom," I say, looking at her tired eyes. Worrisome lines are drawn on her face by the passage of time. The dreams she had for us shoveled in some forgotten drawer. The dream that I would graduate from college, get married, have kids, travel, get to know the world, as she did before my accident. Carrying this 25-year-old and 132 pounds weight that lives in the room next door - it's very heavy baggage. So heavy that it stopped her life and mine, and we can’t move.

"Still looking at the neighbor?" she asks.

"And what did he do differently today?"

"The same thing he has been doing for the past 3 years since his wife and son died in that accident on this ship he was piloting."

"It must be so hard, being a professional sailor and having one of your greatest passions being the reaper who takes the lives of those you love..." she says, looking at me and putting her hand on my leg, but I don't feel anything.

And in her silence, I know what she means. That I can get out of here, that I can try, do it differently. That I'm young, and I have my whole life ahead of me. All her words fill up that silence, and I don't say anything. She kisses me on the forehead and leaves.

My mother stopped working because of me. I told her that she didn't need to, that I was ok being home alone. But she felt bad. She spends her afternoons keeping me company, sitting in the red armchair by the window. We sometimes spend time together looking at our neighbor. I think this window means freedom to her, to me, it means company. There is someone in the world who lives an inert life like me. I’ve been in this bed for 5 years, and he has been in this repeated life for 3. I knew his son and his wife. They were part of my horizon inside the window before they were gone.

The mother had a beauty that hadn't been dimmed by age. She was talkative, active, and cared for their garden like no one else.

Their son was an athlete like his father. Occasionally they came home with trophies. The sun would reflect at my room through silver, gold and copper medals. One day they left together, father, mother, and son. On that same day, the father came back alone. He was crying furtively.

I knew they had died before my mom told me. I knew because my neighbor died with them. The way he walked changed, the way he acted, who he was. He changed his routine to one that fit his sadness, which seemed huge.

At least now, he keeps me company in solitude - two separate loneliness who complement each other. We spend the days together, me from my window and him with his ship. Together we watch the sunset.

On this particular day, he spent more time contemplating the sun, more time cleaning the boat. He cut a flower from his garden and placed it on the helm. This day the ritual was a little different. My mom came to bring me dinner and read me a chapter from The Bell Jar by Silvia Plath, which I love. I love any life that isn’t mine.

We talked about anything, except for the desire she has for me to continue wanting to live. But I don't have it, so we don't talk about it. She kisses me good night. The neighbor turns off his light, and in my horizon, I can only see now the moon reflected in the polished ship. Sad sails looking down, a silent cry from an old adventurer who will never see the sea again. I sleep dreaming of this ship and wake up drowning.

I hear a low alarm. It was repetitive and strong. The sound grows louder and, I wake up scared. I look at my watch, 4:45 am, 15 minutes before my official time to wake up. It was an intense sound, a scream, a siren - a sound of despair, a cry for help. Red and orange lights invade my horizon, and the dream goes away, giving room for reality. The door opens abruptly as my mother looks at me, red from the lights. “Mom, I think it's an ambulance..” and together, we look out the window.

Men in white run down and enter my neighbor's house. I feel violated. These men who don't even know him will know more than I do. “What happened? I'm going to see if they need help because I know he doesn't have anyone! ” says mother as she leaves without giving me time to say anything.

The words are choking on my chest. My only friend is being carried on a gurney into the ambulance. I can see mother talking to the nurses, and she hands them a paper. What happened to my friend? A thousand things go through my head. The fragility of life, of aging. The passage of time, and those for which time does not pass. The size of the pain of death that invades life. The loss that forbids us to move on.

The ambulance runs away, bringing with it the cry of pain that gets more and more distant as I hear my mother's footsteps. She comes so carefully that I believe she brings bad news. "He had a heart attack during the night and pressed the button on the emergency device he had in his room. They came to pick him up, but it is almost certain that he will not survive. I am sorry, daughter." She hugs me. I cry all morning copiously, looking at that window without seeing my friend, but only his ship on the horizon. Lonely, inert.

The call came later that day. He was gone. He went to meet his wife and son in a place where no ocean will ever be able to take them away again. The boat stayed. In its inertia, I saw mine. I, like him, live adrift, waiting for an end that can take a long time to arrive.

He spent his last years looking at the ship standing still in the garden, guilt preventing him from enjoying the one thing he loved that was still alive. He, as I, deprived himself of living. The window stayed, the boat stayed. Soon I can go too, and this is how I want to spend my days? Looking at the boat of life without ever sailing it again?

My mother enters the room with my breakfast, she didn’t knock this time. “Daughter, I read what was written on the boat. Do you want to know what it was? ”

I don't know if I want to. The emptiness that my neighbor left inside me became an abyss. Will I have the same fate as him?

It's a quote I know from Sylvia Plath. I start to cry non-stop, and so does my mother. She hugs me.

"It’s time to open your eyes to the world, my daughter. Do you want to go outside with me?"

I tell stories and write books!