by Matthew Grantham 3 months ago in family
Report Story 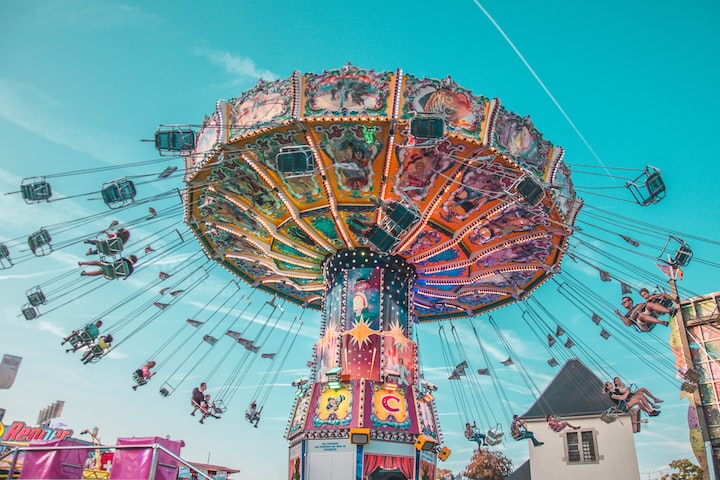 Photo by Polina Sushko on Unsplash

I remember being stood by the toilets, waiting for my uncle to come out of the toilets and they were next to this really big rollercoaster that I didn’t want to go on, but my dad had said ‘come on, don’t be a wuss, come on with me it’ll be fun!’ This made me not want to go on even more. I wouldn’t say I enjoyed being angry at my dad, or to wanted to contradict him, but it allowed me to side with mum as she would often say ‘he said no, don’t force him if he doesn’t want to’ which pleased me that I got my own way.

I think we went to all the theme parks to make him happy really as I didn’t go on many and my mum didn’t like rides so it was just him and uncle. We went on 2 big family trips to Disneyland in America and 1 to Paris where others would enjoy the rides with my dad and I didn’t find the need to argue or go through the same back and forth conversation with him about me not wanting to go on the rides with him.

We did go to a couple as just us 3 and I realised that he was trying to teach me a lesson. A lesson to ‘be a man’.

I’ve heard my uncle say that I’m anxious, at 12 I don’t know what this means but it wasn’t what my dad said to me in front of the pirate ship.

I was just about 10 and we went to a theme park local to us, it was only a small one and it was a nice summers day and each weekend mum and dad would take us somewhere on the Saturday and then we would chill out on the Sunday. My brother was 5 at the time and loved a ride – he was the rebellious one they said, they also called him a little toe-rag but that was something else that didn’t make sense to me – and so it was his choice to go here. I was expecting the normal conversation to happen but something different happened this day and it’s stuck with me ever since.

We were in front of the pirate ship. I don’t know why I didn’t like it but the way it went back and forth and up so high it was nearly vertical so the people inside were facing right towards the earth gave the shivers and I knew I wasn’t going on it. What if something got caught and the big cogs flew off like they did in the movies? What if my belt wasn’t fastened properly and I fell out, right where it was at its highest point? What if something went wrong and I was going to die? I often had these thoughts; they just came naturally to me as my dad would always say ‘be careful when you cross the road’ or ‘watch out for your brother going down the stairs’ or ‘stop! Before you hurt yourself’ with literally anything I was doing. I couldn’t help but think ‘what if’, hence me not wanting to go a ride that was made to make you feel the lack of control.

My dad swore a lot but I didn’t repeat many of the words back to him or mum, only used them with bullies at school but this one I hadn’t heard before. He asked me if I wanted to go on this, that would be fun (of course he said that) and I said no for the second time and then he said ‘oh come on, don’t be a p*!&%, man up and come on with me’.

Man up? What does that mean? Again, I didn’t want to go on even more now than when he first asked me but man up? So, I wouldn’t be a man if I didn’t go on a ride when I’ve already made the decision to not go on it? Mum wasn’t around to fight my corner as she was getting an ice cream for my brother but I didn’t know what to say but I managed to stand my ground and said I wasn’t going on it and he accepted this.

Maybe he had realised what he said but from then on, he didn’t ask me to go on anymore rides, I was happy just sitting there with mum and watching others take their lives into their own hands. I look back and I know why he now acts the way he does, he was ashamed for telling me to man up.

Being a man can take many forms. Don’t listen to the toxicity of others, do you and do only what you feel or think is right. Be happy and choose your people.

More stories from Matthew Grantham and writers in Humans and other communities.