by Kate Hewitt 7 days ago in humanity 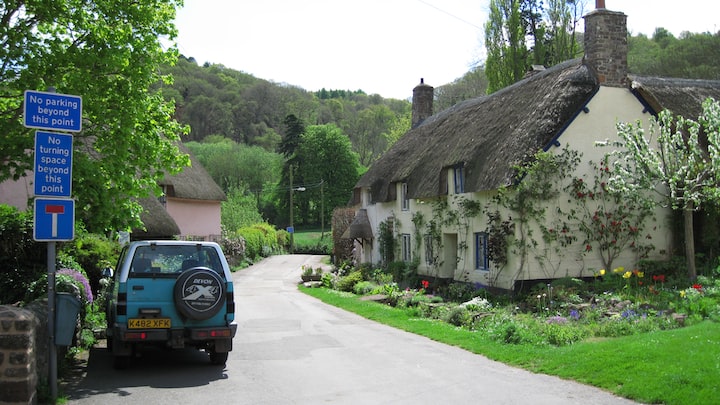 Photo by Robert Thomas on Unsplash

She started the following Monday. It was a bleak, grey day in mid-February, and even Highton, the chocolate-box village where Peter Lanford lived, looked dull under a pewter sky. Sarah didn’t care. She didn’t even mind the wind that nearly blew her off her bike as she cycled the three miles from town. She pulled her scarf up around her mouth and nose and lowered her head against the arctic onslaught.

As she propped her bike up against the side of Peter’s cottage she saw a net curtain twitch in the terraced house across the street. She felt the invisible yet beady stare of someone who clearly thought Peter Lanford’s new housekeeper was something of interest. She turned, but whoever was behind the curtains melted away. The street was silent; the village had emptied out of London commuters by eight o’clock in the morning.

Once inside she breathed in the dusty scent of a house with too many books and papers. It reminded her of the library at university, and she felt a little pang of bittersweet memory. She’d been happy there.

Peter had been industrious, having got out all the spray bottles and rags under the sink that comprised his cleaning supplies. Sarah eyed them askance; they looked ancient, the bottles with dried-up drips running down their sides. He ducked his head in almost boyish apology.

“Sorry. I haven’t really cleaned since—”

“It’s fine. I’ll buy some newer things for next time.”

“My daughter Megan usually does a blitz around the house when she comes for a visit, but she brings her own things, even a Hoover.”

“She sounds frighteningly organized,” Sarah said and reached for a pair of yellow rubber gloves. “I’ll just get started, shall I?”

Peter disappeared into his study, a room quite astonishing in its level of disarray, and Sarah started on the kitchen. She hummed under her breath as she sprayed counters and carefully wiped away a thick patina of dust from the Dresden china displayed on a Welsh dresser. The kitchen was small and narrow, but opened into a pleasing dining nook with a bay window that overlooked the street. She liked the room, the rumble of the Aga and the comforting tick of the clock above the sink.

At eleven o’clock, having cleaned both the kitchen and the downstairs loo from top to bottom, Sarah filled the big brass kettle on top of the Aga and knocked once on the half-open door of Peter’s study.

“Pardon, but would you like a cup of tea?”

Peter looked up from the papers scattered across his wide desk, blinking owlishly. “A cup—oh.” He seemed quite astonished by the offer, making Sarah smile. “That would be lovely.”

“Shall I bring it in here or—”

Sarah made a pot of tea and tipped a few rather stale custard creams onto a plate and brought it all out to the conservatory.

Peter smiled apologetically as he bit into one of the custard creams. “I’m afraid I don’t get out to the shops as much as I should. It’s normally just toast and tinned soup for dinner for me, and maybe a cheese sandwich for lunch.”

“Everyone needs their biscuits,” Sarah said as she took one of them. She took a breath, and then said, “I could do your shopping for you, if you like. And make some biscuits.” She spoke in an offhand manner even though her heart had started beating hard. The thought of filling the little larder with good food, of being elbow-deep in flour in that cozy little kitchen, was a prospect that made her ache with longing.

“You wouldn’t.” She smiled, kept her voice matter-of-fact instead of eager. “You wouldn’t,” she said again.

Within a week she’d managed to clean the cottage properly from top to bottom: the kitchen and sitting room and conservatory, the three bedrooms upstairs and the two bathrooms. She left the study alone.

In Peter’s bedroom she stopped in front of a large sterling silver frame and gazed at the photograph of a much younger but still recognizable Peter with a woman who had a small gap between her front teeth and a riot of curly dark hair. She looked open and friendly and extremely likeable. Sarah could almost imagine her loud laugh, the energy she must have brought to this house. She would have liked to know her, she decided as she polished the frame with toothpaste, a trick she’d learned off the Internet.

She’d filled Peter’s larder and made several lasagnas and casseroles to put in the freezer, all in little foil containers for one. She made biscuits, standing in a pool of sunshine as she rolled them out, humming to herself, very nearly perfectly content.

She looked up once and saw the neighbor of the net curtains gazing out from her window with a frown, iron-grey hair in tight curls all around her pinched face. She smiled and the woman’s frown deepened as she moved away.

Sarah wondered if the woman didn’t like anyone new, or her in particular. But why should she have anything against a housekeeper she’d never met? It would have been nice, she thought, for someone to be friendly. She hadn’t made any friends since moving here, but then she wasn’t all that adept at making friends anywhere. Moving so often had made her shy, hesitant, so that even her friends from university, the only place she’d stayed longer than two years, were little more than acquaintances.

Yet Peter, she realized, had become a friend of sorts. They had taken to having a cup of tea and a biscuit in the conservatory every day at eleven. It had become a ritual of sorts and one Sarah loved: the tea tray and teapot, two biscuits each laid out on plates, two delicate teacups from the Welsh dresser rather than the everyday mugs.

Peter told her a bit about himself: he was sixty-two; his wife had died last year, suddenly, from cancer, six weeks from diagnosis to death, and his three children all lived in various parts of the country. He’d been a history professor at Oxford and was now writing a book on seventeenth century shipping policies.

“The most boring thing you can think of, probably,” he said with a laugh and Sarah shook her head.

“No, I’m sure it’s very interesting.”

She smiled, thinking of her days at university, afternoons in the library. “Yes, I did.”

“And you taught English—”

“But you were born here—”

“Yes, but I can’t really call it home. I can’t call anywhere home.” She heard the slight wobble in her voice and embarrassed, took a sip of tea, averting her eyes. She did not want his pity; neither did she want to reveal the intense longing she’d had for a home like this one, with boots by the door and faded, overstuffed armchairs in the sitting room, biscuits baking in the oven and a wild garden to manage.

One day in late March, with the weak spring sunlight touching the tangled garden like a balm, she suggested she spend a little time outside, putting the garden to rights.

“Only if you want me to. I don’t want to change anything—” She knew by then that the garden had been his wife Rachel’s domain, her joy, and perhaps now a bit of a shrine.

Peter smiled crookedly. “I hope you want to change things, Sarah. It’s a bloody disaster out there. But you’ll need to take on more hours.”

“You don’t have to pay me more,” Sarah said quickly. She felt the fragility of her position; at any moment it could all be taken away, and with only a flicker of apology. Perhaps Peter’s daughter Megan, whom Sarah had yet to meet, would decide dear old Dad didn’t need a housekeeper, and she’d do the work herself. Maybe Peter would feel he didn’t really have the money. He had, Sarah knew, taken her on as somewhat of a temporary measure, until he could manage better by himself. “I’d like to muck about a bit in the garden anyway,” she said and Peter shook his head; her heart seemed to still.

“Of course I’ll pay you,” he answered, in a tone that brooked no disagreement. “I can afford it, and you deserve it.”

She smiled, relieved, and accepted, although she didn’t actually need the money. If she budgeted carefully she had enough from her inheritance to live on for years, but she suspected it was a point of pride for Peter, and she wanted to get her hands on the garden.

She fell into a comfortable routine: cleaning and cooking in the morning, gardening in the afternoons. She’d taken out a book on gardening from the library, just as she’d taken one on cooking, and spent hours poring over them in the quiet of her bedsit at night. She found, though, that she didn’t really need the books; it all came naturally, as if her body had been waiting to perform these simple acts, just as her heart had been craving them.

One day she was kneeling in front of a much-neglected bed of herbs when she saw a middle-aged woman in the garden next door watching her, a pair of shears in one hand, two sleek Greyhounds crouched by her heels.

“Hello.” Sarah sat back on her knees and smiled. She hadn’t actually met any of the neighbors in the six weeks since she’d been working there, although she’d wanted to. “I’m Sarah, Peter’s housekeeper.”

The woman, narrow-faced and angular, the kind of woman who had dogs but few friends, Sarah thought, put her hands on her hips. “Peter, is it,” she said, and turned away.

Stung, Sarah simply knelt there, the trowel in her hand, her face starting to flush with a terrible mix of embarrassment, hurt, and a twinge of shame. She had never been quite so rudely dismissed before, and she did not understand it. Was she meant to call Peter Mr. Lanford? Did the neighbors think she was being too familiar with him, that he was above her somehow?

She couldn’t ask Peter, or mention such a thing to him. He would only be flustered, and she would be even more humiliated. Yet the sting of the woman’s rejection of her stayed with her for the rest of the day and into the evening as she wheeled her bike down Peter’s garden path, the gate creaking as she opened it and went out into the street. It was four o’clock and the commuters had not yet come home; the village was completely quiet, utterly still.

Sarah glanced at a few of the cottages near Peter’s but not even a net curtain twitched. Still, she felt as if someone were watching her. Watching and judging.

I am a bestselling author of both novels and short fiction. I love writing stories of compelling, relatable emotion. You can find out more about my work at kate-hewitt.com

See all posts by Kate Hewitt →