by Justin Boyette 23 days ago in pop culture
Report Story

Why the future of virtual reality is (actually) brighter than ever 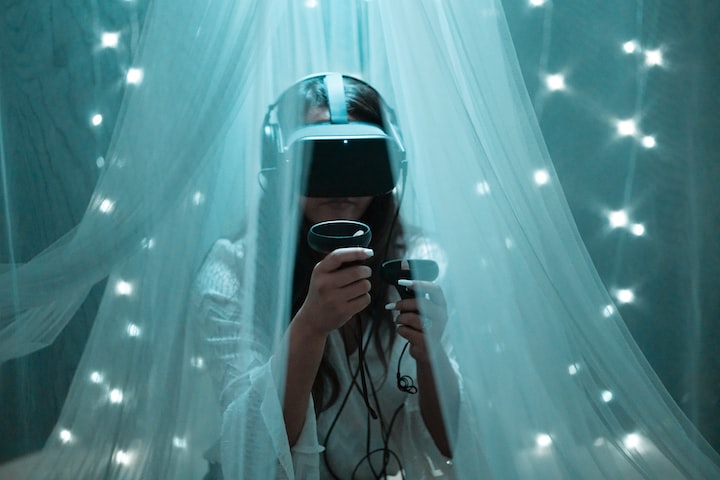 Photo by Barbara Zandoval on Unsplash

Imagine a world where you wake up in your penthouse apartment, 90 stories above the ground. It’s homely, modern, and warm against the neon blues that paint the city outside.

Through the frosted glass (encryption to protect your apartment from virtual pirates) are flying cars, whirring softly as they float by. A rich bliss. Below you are a sea of avatars, tailor-made to look like cyborgs, aliens, and cute anime girls. Even from your balcony, their cacophonous voices tend to bubble up here. Rude. Some of the suited avatars are moving in a hurry — being late to a meeting is a cardinal sin here. A couple walks slowly, exhaling sweet humanities between themselves.

All of them are real people, in the real world somewhere, looking to enjoy their time around the virtual block.

But none of it is real — we know this. What I mean is that this version of the metaverse doesn’t exist yet.

There are no neon cities, no flying cars, and nobody running late to a meeting. In 2022, the metaverse we try to enjoy is absurdly primitive, limited, and isn’t all that attractive beyond the novelty of putting on a headset for the first time.

But why do people hate it so much? There’s plenty of YouTube content and comments in the anti-metaverse camp. Sure, virtual reality (VR) isn’t all that it could be, but from reading comments it looks like people are genuinely afraid of the potential of a virtual future.

I believe a lot of this fear comes from the dissonance between what’s marketed by pop culture as VR and what the actual VR experience is like. People see movies like Ready Player One and are completely disenchanted when they realize modern graphics are horrible, interfaces are clunky, and to become more immersed requires spending ungodly amounts of money to do it right. Their knee-jerk reaction is to recoil at the whole enterprise of VR, rather than try to understand exactly how much more it can offer.

Yes, I am a big believer in virtual reality. Yes, I do have beef with objectors. But I also sympathize with their cause. From their narrow perspective, VR is a cold, unforgiving vacuum that’s meant to suck humanity right out of us. Unnatural, and unnerving. If these assumptions were objectively true, I’d be terrified.

But they aren’t, and the future of VR is only getting brighter. Let me broaden your digital horizons.

I think VR is super dope

For the first time in human history, we’re able to experience games and media in brand new ways, opening uncharted pathways for education, entertainment, and human connection to thrive.

I agree with the haters, though. It’s nothing like the metaverse that science-fiction promised.

But I disagree with the reasons for the hate.

From what I can tell, these people fall into two camps, both with theoretically solid points until you dig deeper. Of course, there are more nuances to any argument, but two major points are that:

Fronted by tech giants, the fear of monopolizing the metaverse is unavoidable and endangers its digital citizens.

There exists a falling so in love with the metaverse that you’ll want to trade in your real life for a digital one.

These are understandable concerns.

1 — A metaverse monopoly is a virtual impossibility

If one entity were to hold a monopoly on the metaverse, it could dictate the lives of the people within it. Maybe every metaverse penthouse comes with an unremovable sticker with branding attached. Or worse. Probably worse. There’d be a loss of autonomy and individual expression on the moral ground, a major selling point of VR. On the financial ground, a monopoly over the VR space might also mean strict rules for engagement with third-party software developers looking to contribute to the metaverse, or no engagement with third parties at all — stifling innovation.

In no world is the metaverse a one deal buy-in.

Nobody owns the metaverse because it doesn’t exist. In the same way that no matter your phone’s operating system you still need to hit the home button to switch apps, the same is required when using VR. It’s decentralized — not in the blockchain crypto-bro sense (which is an entirely different yet equally fruitful discussion we’ll table for now), but when you load into your headset the first thing you see isn’t a fully livable world. It’s a home environment, customizable to an extent but not an interactive space outside of your home screen, which is a floating version of what we see on phones. We have to choose an app to enter, then exit it before entering another one. So we can experience intense starship battles and trips to the Jurassic, just not in a self-contained world.

The Apple store can limit the types of apps it allows to be sold through their platform, but the Google play store and various others still exist that host smaller software houses and indie developers. VR is the same way. There is no reason to think that Facebook changing its name to Meta and trying to flesh out a wheel that’s been in the canon of science fiction for decades is cause for concern. There will still be room for third parties and alternative voices to push VR technology and culture alongside larger firms.

If anything, the VR world’s recent spotlight back into the mainstream has only spurred a gold rush of people interested to add their page to the story of virtual reality. With the more mainstream appeal of pushing VR culture forward, competition between major and minor parties is sure to lead to explosive innovations in the future.

2 — VR will lead people away from seeking tangible experiences

In countless YouTube comments, another category of VR opposition was that the attractiveness of the technology, now and in the future, will cripple real-life interaction and engagement with the physical world. To me, this reads like an all too familiar objection to screening time. Growing up, the rhetoric on children and screen time was that it isn’t good for them. Go outside and play. Hang out with your friends. This isn’t a new argument. Before video games and streaming were popular, cable TV was the enemy. Before that, radio. Way before that, books.

Like any new technology, there will be a group of people who can’t stand it or understand it, and believe it’ll turn the next generation’s brains to mush.

It won’t. It never does.

I don’t believe that VR is a perfect substitute for socialization, nor is it a viable replacement for real-world experiences. But it is a fantastic supplement to both. My reaction to coping socially at the height of the pandemic was to start an interview podcast so I’d always be meeting new people and holding conversations, meaningful or otherwise. And through various deep dives into VR culture, I’ve learned that people used it as their way to supplement physical social interaction when it went missing in their own lives.

Extend this further to individuals who find themselves unable to communicate the way they want to in real-world social settings. There are so many YouTube videos dedicated to sharing the secrets of VR users, and a common one is that they suffer from social anxiety that VR helps alleviate. Where a timid person would normally be quiet, they can find it easier to thrive in virtual settings.

Even at its most useful, virtual experiences are still virtual. While individuals predisposed to video game addiction might continue to fall victim to their condition, the vast majority of people are just fine simply taking off the headset and reentering the real world.

The modern metaverse is great, even in its infancy

When compared to its depictions in pop culture, the modern metaverse doesn’t even come close to the level of immersion seen in movies like Ready Player One or books like Neal Stephenson’s Snow Crash. Even in this early stage of VR’s development into the lives of everyday people, it’s proven to bring people together from around the world, inspire new forms of virtual entertainment, and bring us one step closer to the metaverse that modern science fiction can only dream of.

Back in 2007, people pushed back against the first generation iPhone as something unimaginative and excessive. They wondered why the iPhone was trying to be larger when nearly every other phone celebrated progressively smaller form factors? What use was this touch screen? A lot of people brushed it off as useless, including major competitors in the space like Blackberry’s founder Mike Lazaridis. In Think Again, Adam Grant notes that:

As the iPhone skyrocketed onto the scene, Mike maintained his belief in the features that had made the BlackBerry a sensation in the past. He was confident that people wanted a wireless device for work emails and calls, not an entire computer in their pocket with apps for home entertainment.

I’m willing to put good money on whether your phone has a physical keyboard on it.

Apple had to take those baby steps to pave the way for the sleek, modern, and elegant smartphones most of us use as daily drivers. The same is true for modern-day virtual reality. The vision is there — it’s been there for decades. We just have to trust that the next generation of VR infrastructure is built in a way where a sci-fi metaverse is not only a possibility but a guarantee of future experiences.

Until then, we’ll just have to keep dreaming.

Disclaimer: This story was originally published on Medium.

Here’s a link to the original version:

W﻿riting about learning, organization, and erudition.

More stories from Justin Boyette and writers in Futurism and other communities.